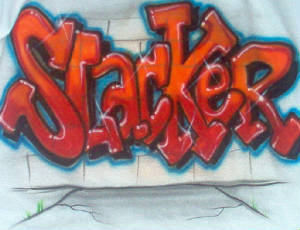 Slackateria
In the Olympics of Slack, I would be considered an overachiever.
As I mentioned last month, the in-laws will arrive from San Francisco on Saturday. Joy. Countdown to hearing how everything in Texas sucks. How Californians are all environmentally friendly - that's what they tell themselves when they recycle plastic, glass and paper to salve their consciences because they all spend 2 or more hours per day inundating the environment with petrochemical fumes during their commute into town to do their jobs which are much more important to the world than anything going on here in Texas.
... I have this big event I have to sell my jewelry in in 10 days, and I've been dragging my feet making up new stock to display and sell. Yes, I've been such a slacker that I have only started making new beads for the event in earnest tonight, and not VERY earnest at that. I don't even feel guilty - it's just that when all the family is gathered next week at my Mother-In-Law & FIL's new home, I want a reason to HAVE to bugger off early. "Oh shit - I've gotta go make some beads and jewelry. Darn! I wish I could spend more time with you guys!"
So, I've dawdled and dawdled, squandering precious hours with the elan of a seasoned veteran. After getting up before the crack of noon today, I showered and went outside and lounged by the pool nekkid save for a big luxurious robe, wet hair caressed by the breeze, reading my book, my toes running through the fur on my little dog's flanks. Lazy, but wonderful. I won't regret that hour spent...
Like I said last time, they're staying for a week, and I will be AMAZED if they don't move over to my (filthy) house within 3 days of arriving, so even working on my jewelry I wouldn't be off the hook. Maybe it's the meds, because I feel anesthetized to all this stuff. Add to this the fact that my big sales event coincides with the weekend all my clan is gathering in Arkansas to celebrate my grandparent's - geez - like their 70th wedding anniversary.
Grandpa is not someone I'm overly fond of, but I feel for him, poor old cadger. Grandma, on the other hand, is a gorgeous person whom I dearly love, but she has Alzheimer's, and has often left the building when you see her, leaving a hostile, aggressive woman in her place. It's heartbreaking. As I've been listening to the Neko Case cd, this one song about madness keeps reminding me of her - Dirty Knife.

He sang nursery rhymes to paralyze
The wolves that eddy out the corner of his eyes
But they squared him frozen where he stood
In the glow of the furniture piled high for firewood
And the blood runs crazy...
Terrors borne of a lonely, treacherous place where nothing and no one is familiar, a world peopled by strangers with menace in their eyes. I grieve that I won't be seeing Grandma that weekend, and yet, something in me is relieved, too. And the worst of it all is knowing the torment my darling father suffers because of this. I would give anything to spare him that heartache - he's one of the kindest, gentlest souls on earth, which is very like my grandma is/was.
Sorry, this turned into a bit of a ramble, dinnit? I'll try to be more amusing next time...
Posted by phlegmfatale at 12:49 AM

Any time spent with a dog is time well spent, indeed.

I hear the same damned thing from the LA relatives. Ha. Ha. Ha. Whatever.

It also sucks to see your parents have heartache over their own. I'm sorry.

Damn, it's difficult to type well at 3 in the morning.

I'm arranging for my Mum to fly over Phlegm. In jewellery circles she's known as a "furious beader".

She's a sweetheart, every single item she sells, she gives the money to a local hospital.

nongirlfriend - yeah, it was therapeutic for me and my toes, and maybe even the doglet. She loves lazing in the sunshine, now that she is in her dotage. Thanks for the commiseration. I think you type pretty well for 3am!

ben - you need to send me some .jpgs of her work, and I'll post them - I love seeing the work of others. Hopefully I'll get some fresh pics up by this time next week. Your mom sounds an absolutely lamb - very generous and sweet, and no doubt very talented!

Isn't it sort of comforting that we can find the right phrases in somebody's music to help us describe our own circumstances. Like a community.
But your poolside description has now got me absolutely panting for summer and just yesterday I was okay with the snow. Drat you!

Californians crack me up. It's a love-hate thing.

Preserve us from our beloved families, I say. I have made a point of staying 1500 miles away most of my life...not that it's always worked.
My heart goes out to you and your Dad. I watched dementia creep up on my father. Watched him lose himself a bit at a time and I know it's harder to accept than actually losing someone to death.

I hope that once you get moving on your work for the sale, it's fun - and totally absorbing. Meaning it totally blocks out everything you don't actually want to deal with.

Will said...
This comment has been removed by a blog administrator.
1:19 PM

I'm going to use the word "Elan" in conversation today.

Interstate 20 Westbound will cure what ails them.
Probably help you out at the same time.

Best to your Grandma and Granpa.

California is overrated. Texas rocks. See I learned something valuable on my vacation!

Sorry to hear about your grandmother. Alzheimer's is such a horrible disease. My great-grandmother had it and it was an awful thing to experience.

I'm so glad I don't have in-laws anymore.

barbara - My sentiments precisely on the comfort of music. I LOVE snow - prefer it to sunshine, but now I merely tolerate sunny weather because there's a pool and it's nice to sit outside. Also, I have tons of blooming stuff, and the Monarchs have just started flying in from South America in the last week - I always look forward to their migrations - magnificent.

phoenix - Yup - I'll bet if grandma had slipped grandpa some hemlock the first time she wanted to, she would have been out of prison before I was born. 70 years, I don't know how she stood him.

lj - ooohh, I hate that you are able to commiserate on that story - it's a singular type of heartbreak, and the grieving while the person lingers on, perhaps for years. ...I'll get some momentum going with my work - I made some great sets of beads for earrings last night, and I've had a design brainwave, which is always a good thing.

dick - trust me -I'll be in high celebration mode once they've high-tailed it out of town. Maybe I could find a nice firing range for us to visit for recreation while they're here, eh?

will - thank you, you're sweet, and already one of my favorite things about San Francisco

o.g. California DOES have its charms - I LOVE wine country, and I do love freaky people, which they have no shortage of.
As for Alzheimer's, I think that medicine keeps bodies alive longer than is healthy for the mind, so they linger and then fade out. As awful and horrifically shocking as heart attack or fatal stroke might be, I think it must be preferable to that lingering diminution of any kind of madness. There's the frustration for the loved ones who witness it, and then the distress of the ill one who is terrified in moments of lucidity, knowing something is going horribly wrong with their conscious mind. I'm sorry you can relate to this

pud - yeah, who said there's nothing good about divorce?

phlegm, I enjoy wine myself, but I still have to say that I prefer Texas over Cali. And for weird people, hell you can find those anywhere.

Although, CA does seem to have more per capita than most other places.

Yes, OG, weirdos are everywhere. I tried to tell that to an old man in a kelly green blazer (he borrowed my lighter) that very thing this afternoon.

He was convinced there are more crazies in Santa Fe, NM, than there are here.

I happen to think he's wrong.

I still gave him my lighter, though.

What kind of jewelry do you make? Do you have a website or examples? I have an addiction of going to craft fairs...

Good luck with the visit. Hopefully, they won't drive you too crazy.

love learning new words - esp that pertain to me and my life...
Slackateria
FAAAAB-U-LOUS

o.g. I think we have a better understanding for our homegrown-weirdos, who more often are simply a variety of eccentric native to this region, whereas there seems no method to the madness of California weirdos. Thank goodness for wine from the Russian River Valley, though. I DO be loving me some of that!

nongirlfriend - I dunno - I'd say there are an awful lot of foreigners in Santa Fe, and any more, the locals can't afford to stay there. The man in the kelly green blazer might know from crazy, after all!

becky - I do lampwork glass beads on torch with glass rods from Italy and Germany, and I make needle-woven bead pieces, as well as simple bead and silver jewelry. Craft fairs ARE addictive. Thanks for the well-wishes, the day is upon us. Will have a full report beginning Sunday, I expect. Husband told me tonight that one of the things they complained about when they were here was that the water pressure is too powerful here. They are waaaay too used to wimpy.