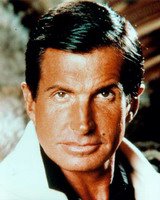 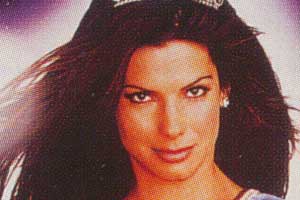 Separated at birth...
Now don't get me wrong. I really do like Sandy Bullock. Apparently my dad thinks she's cute and deflected mom's rancor by saying she looks like George Hamilton. Well. Maybe so, but she's still hot. Seems to me that invoking the spectre of some garish person of your own sex would be the eyecandy buzzkill that would toll the deathknell of a serious crush. Then again, dad being a guy and all - who understand how that brain works anyhoo?
Sandra Bullock wins mad props too for marrying a guy who can administer an oil change. Between you and me - effete himbo Hollywood type males are useless. 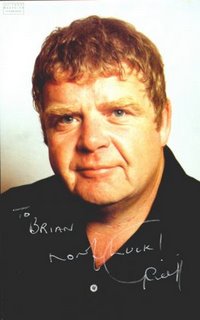 And when it comes to British men, I find Geoffrey Hughes who plays Onslow on Keeping Up Appearances WAAAAY more attractive than milquetoast Hugh Grant. 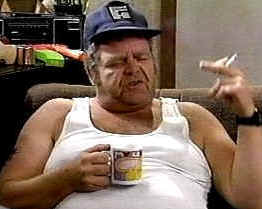 I mentioned I turned 40 in October but that wasn't the moment of onset of older sensibilities, actually, although I've yet to succumb to actual decrepitude. The moment for me was probably aged 35, when watching Gladiator and I realized that I thought the hottest man in the cast was actually Oliver Reed, the hard-ball lover of life who played the august Proximo, gladiator slave-trader in the film. Then again, I once heard it said that old age is when you stop looking at the young girls and start looking at their mothers. Uh, right. Well, we know yo

u guys never stop looking at any of us, but in the case of women, the same might be said.
Incidentally, about Oliver Reed, he died during filming of Gladiator, and Ridley Scott spent $3 million to reproduce his likeness for final scenes of the film. From imdb:
He died of a heart attack in a bar after downing three bottles of Captain Morgan's Jamaica rum, eight bottles of German beer, numerous doubles of Famous Grouse whiskey, and beating five much younger Royal Navy sailors at arm-wrestling. His bar bill for that final lunch time totaled 270 Maltese lira, almost £450.
Party on, dude!
Posted by phlegmfatale at 12:01 AM

I like this post.
Geoffrey Hughes, heh! But I agree with you about Hugh Grant ... I passed him in the street once, and honestly if I hadn't known who he was I wouldn't have noticed him.

Are you kidding? Sandra Bullock is the BOMB. George Hamilton, my ass.
And you make glass beads?? Where are the pictures? Tell me there are pictures.

That is certainly a fitting end for a final feast. Liquid style.

George and Sandra look crazy alike, I have never noticed!

I agree - she is smart for marrying someone who could actually fix something. Plus he is smoking hot, I love a manly man :)

Oliver Reed, something of an enigma. Technically a brilliant actor, but his off screen life was a shambles. I bet he not only beat them at arm wrestling, but drank them under the table as well.

Ok, here's me being a TV geek.

You've got a photo to the right of the one of Oliver Reed as August Proximo. That photo's not of Oliver Reed... that's Geoffrey Hughes (think I have the name right) playing the character "Onslow" from the BBC comedy "Keeping up Appearances".

starbender - you got it - exit swinging

Mary - Yeah, I loved HG in Sense & S and even About a Boy - he was very sympathetic in that film in a pitiful way, but generally, he's just so... unmanly, and unremarkable.

lj - I LOVE SB - she's a sexy, gorgeous, healthy-looking girl, which is turning into a rarity in Tinseltown. ...Getting a light cube today for photographing my work before I sell it off at an art show in 2 weeks, will post some photos, hon. Thanks for asking

fuzzbox - It's good to die doing what you love, and apparently Ollie loved having a lot of Captain in him.

ben - I'll bet you're right - that's an unwieldy amount of booze for anyone. I'll bet the undertaker got a contact drunk from the fumes alone

dr. strangegun - Nothing wrong with being a tv geek - yeah, I'm weird like that - I was saying I find Onslow more appealing than Hugh Grant.

*face in hands* sorry about that, it's Monday morning. I missed the whole part about Hughes vs. Grant.

s'ok, hon. you're still wonderful- and the hughes vs. grant thing was relatively small

What a way to die...I heard he lived a very rough lifestyle. I remember him in the movie Oliver. He was really scary.

That is some impressive drinking, all right!

If I was your mom I would be considerably more disturbed by your dad adding the George Hamilton defence to his comment, than by the original comment itself.

nongirlfriend - impressively unhealthy - but I'll bet he's done that a thousand times before and lived through it.

I can barely stand Keeping Up Appearances (I hate Hyacinth), but I watch it because Onslow is an inspiration & a hero.
Sounds like Oliver Reed would've been a hoot to party with.

Hi-thanks for visiting my blog. I've seen you at Tickersoid's place and kind of chuckle every time I see your user name.

Holy Cow, Oliver Reed was a noteworthy drinker. Explains a few things about his life eh?

OMG I never noticed the Sandra-George thing, but at least in this photo, IT'S FREAKIN' TRUE!!

Onslow is a real man, for sure...except for when he dons his Green Bay Packers gear...then he's just white trash. ;-)

Wow! The Sandra-George thing is scary!

Christ, three shots would do me in!

tennessee budd - hyacinth is adorably pathetic, actually - annoying, but I like her anyway. Onslow rocks, though.

kyahgirl - thanks for stopping by - yeah, he was a thirsty fellow, apparently!

mrs k - we say that all the time around our house

ian - you gotta respect him

nongirlfriend - yeah, seriously - the marvel is that he died of a heart attack and not alcohol poisoning - like I said - he MUST have done that many times before.

I can't believe he made it through two bottles...jeez.

for real, nongirlfriend - NO liquor is THAT good. scary.