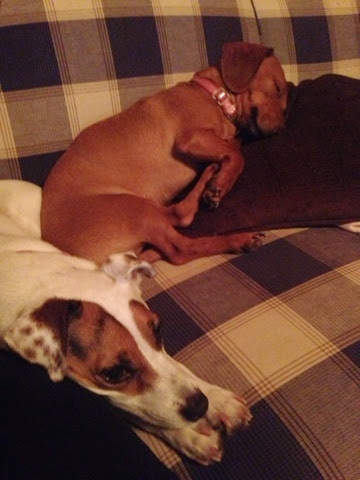 My sweet little girls.
Posted by phlegmfatale at 1:48 PM 4 comments:

At breakfast with my parents:

Dad: there was a car called an Austin?
Me: like an Austin-Healy?
Dad: I don't know. I heard a funny thing when I was a little kid.
Me: what was it.
Mom laughs like "here he goes!"
Dad: There once was a young man from Boston
Went to town and bought him an Austin
He had room for his ass
And a gallon of gas
But his balls hung low and he lost 'em
*much laughter at table
Me: why have you never told me this before now?
Mom: he was waiting for you to be mature enough
Me to Dad: I think we've both just been insulted!
Posted by phlegmfatale at 1:47 PM 1 comment:

I just got grumped at!

Indignant mode.
I was feeling hot with Chuy sweat-glued to my back, and I shifted in bed and he had the audacity to grump at me!!! He has a rough life.
Still, I love my cheeky little chap. He is so chesty and proud. The boy DOES love his comfort, though!!!
Posted by phlegmfatale at 2:48 AM 1 comment: 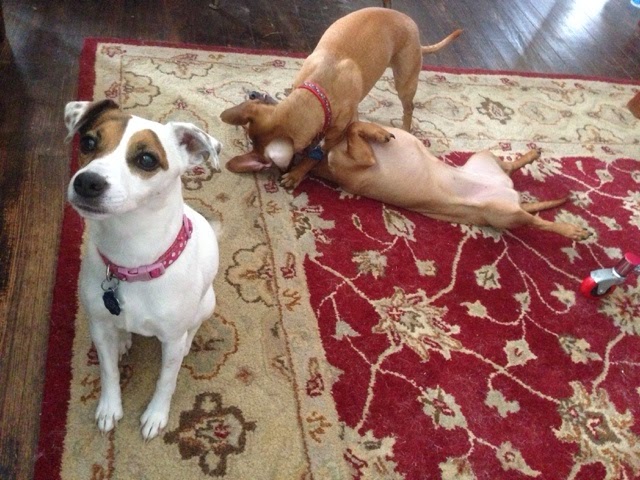 The pups are at their cutest when the house is dirtiest, so please excuse the dirty rug!
Here, Praline looks very innocent while Chuy very industriously denudes Miss Mochi of whiskers. 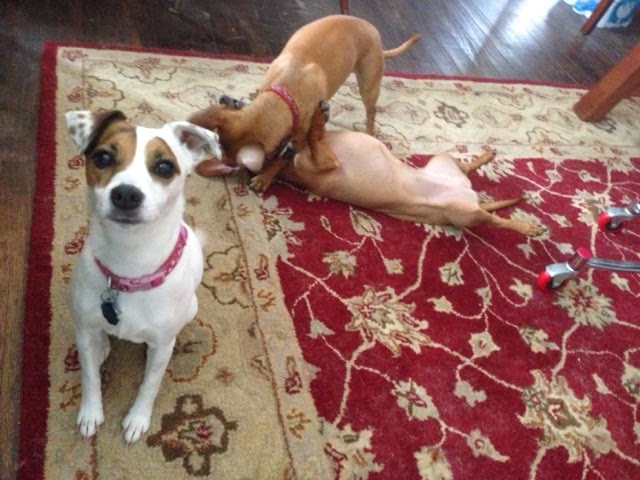 Posted by phlegmfatale at 2:27 PM 2 comments:

I know that I say it every year, but it's eternally true-- I am richly blessed for parents, and I'm so very proud of my Dad.  Everything that's best about me came directly from Mom and Dad. I'll take credit for my own failings, but I couldn't be more grateful to have such lovely folks.

Throughout life there are people whom you admire and over the years, you come to see their flaws and they seem less heroic, less admirable.  Dad is as heroic as ever. He's an exceptional person, and I'm blessed to be his daughter.  I wouldn't trade my parents for anyone on earth, nor for any thing this world could offer.

Last night there was an enormous crack of thunder about 3AM and Praline stood bolt upright and started barking her brains out as though an intruder were in the house. Then my brown babies joined in, and they were a little raging chorus of puppy fury, ready to kick some thunder butt.
Posted by phlegmfatale at 11:45 PM 1 comment:

I was so sad to hear yesterday of the death of Rik Mayall.  I loved him as the anarchist Rick in The Young Ones, the ubiquitous character in Drop Dead Fred, and of course as Flashheart in Blackadder. So cheeky, silly and funny, he was one of the funniest actors I've ever seen. No one does tongue in cheek (literally!) like Rik:

Mochi just loves her Tuff Gear toy. She's on her second one. It's so cute when she carries it around by the rope. She has endless fun hours gnawing and nomming it. Her favorite toy. 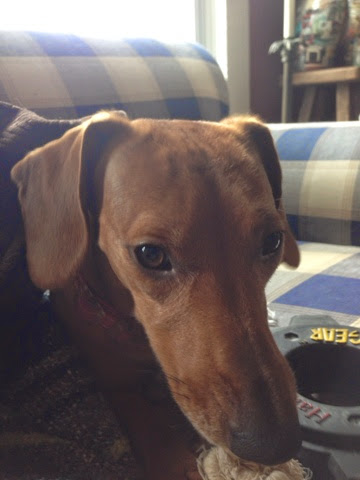 When I was still in school, the idea of summer stretched before me as a sea of possibilities.

In actuality, I continue extremely busy, though with relatively little of the stress of the school year.

Last weekend, Old NFO came to town, along with Hols and JPG and Sylvilagus Aquaticus and his Mrs. and we had a lovely visit, and lots of good eatin'!  It's such a treasure when we can get together with friends, and it's so restorative to have time with people you love.  Plus I got motivated to put at least part of my house in order, and herds of dust buffalo succumbed to vacuumed air. WHOOSH!

I'm working part time at the old company, and I'm grateful for that opportunity. I applied also for a job at the local hospital, but didn't hear from them, which turned out to be for the best, since my knee was banged up.  My meniscal tear is healing quite nicely, and I have very little pain. I hope to be worked back up to wearing my hooker shoes by the time school is back in session. Anyway, the work is not 40 hours a week, so it's not tiring or boring, and some days I leave a little early, depending on call or paperwork volume. I find it a very satisfactory arrangement.

I went to yoga yesterday morning for the first time in 2 years. I can't believe it's been that long, but it's been an extremely busy two years.  It felt great, but it was the hardest yoga session I've ever done, because I think this is the most out-of-shape I've been in quite a while. I'm going again tomorrow, and we'll soon put this to rights. What's great is the Wednesday class is 7:45 AM, and I go to work at 10 on Wednesdays, so it works well for my schedule. Gives me enough time to get home, shower and go to work. I'll go to yoga tomorrow and Sunday, and I'll start Spinning class on Tuesday.

Oh! When I came home from yoga yesterday morning, I found someone had tried to jimmy my front door open. I always lock the deadbolt, but someone apparently tried to pop the knob unlocked with the button lock.  There were gouge marks in the metal and the rubber was sliced of the weather strip thing around the door frame by the doorknob, but the odd thing is that there was no gouging or indication of wear on the door itself by the knob.  Whatever gouged the metal of the stripping would logically have also made marks on the door. It's a mystery.

It's an unsettling mystery.  I trotted my self down to Home Depot and ordered a door measurement for my house, and chose some pre-hung steel doors, along with security doors.  I live in a small town that's relatively quiet, and though I think of myself as generally situationally aware, I think I may be complacent. I hate to think that putting security doors on (with screens so I can let the breeze flow through during nice weather) will make my house look ghetto, but I feel like I need to take extra measures. Does that sound like overkill?  The front door apparently was forced in some years before I bought the house, and I don't think it would take a tremendous amount of effort to break it in again.

I priced doors and my first instinct was the custom door with the three deadbolt lock mechanism, one at about 18" above the bottom and the third about 12" from the top, but that door is $500 more than the steel door with the standard knob/deadbolt.  Again -does this sound like overkill?  My one care is my own safety and that of my pups.  I don't want my stuff stolen or anything, but my universal truth about stuff is they're always making more, whereas there's only these three pups in the world who are these three pups- their well-being is my one care. I'm leaning toward just having the security door and the steel door and hoping that the two in concert will be sufficient-- that will save me about $1000 overall, which is nothing to be sniffed at. What do you think?
Posted by phlegmfatale at 9:00 AM 4 comments: 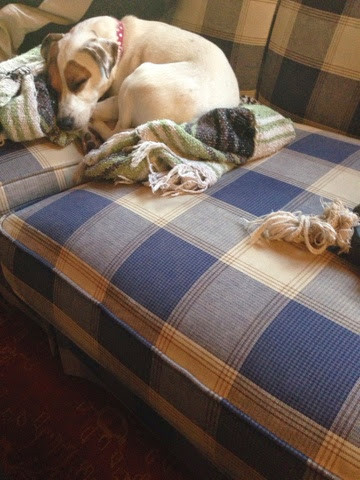 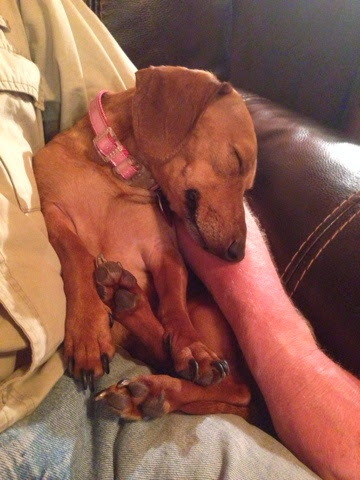