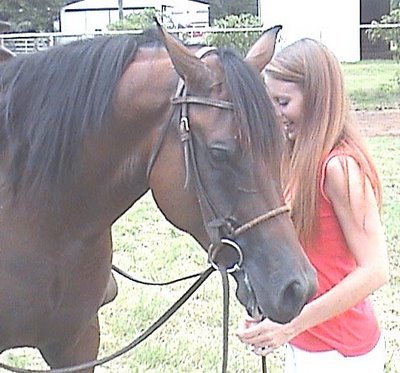 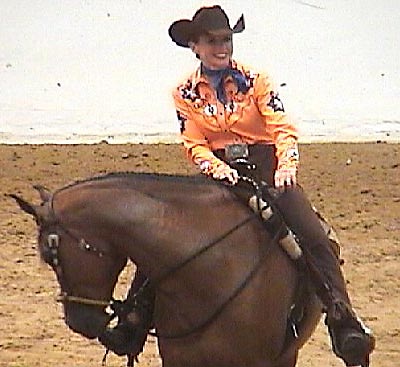 This is my new pal Erin. I've declared we are going to open a head shop together when we're old ladies and call it the stoned pony™, even though I don't do anything illegal anymore and strongly urge everyone else to follow my pristine (lately) example, unless they are buying lifestyle accessories which are purely decorative from our store... Anyhoo.

This is her horse, Pops, a 7 year old Arabian. This orange confection is the matador shirt she had to wear for showing in the Western Style, before the pony was up to snuff for English style. She thinks this $500 shirt is garish, and I think it's fabulous, even though it has no fringe down the back of the sleeves. The Dale Evans neckerchief just makes the look. Anyway, I think she looks like a million, gaudy or not.

But about the horse. Pops could get a job at an airport if they ever run out of german shepherds. Apparently, horsie's first trainer liked to indulge in a bit of herb before training sessions, and got Pops into the habit of getting the US RDA of vitamins T, H, and C. Did you know people bake horses by blowing the smoke in their ears? Consequently, this horse never lost the urge to imbibe and would never pass up an opportunity to get comfortably numb. Now, considering how easily spooked horses are, it seems like this could backfire woefully if one started getting paranoid, worrying about the 5-0, etc...
Erin met some chick at a show once, and Pops was obsessed with her purse and would not be dissuaded from nuzzling the handbag. This freaked the woman out, but later on, she pulled out a joint, and Erin said "A-ha, THAT's what he was after." The horse can smell weed a mile away, apparently, and he's mad for it.
I'd like to see an under-achiever pothead horse, sitting around watching Andy Griffith and Mister Ed re-runs, outmoded butt-sprung ugly old velour couch, industrial bag of cheetos and a pony keg of beer at hand. There'll be a picture of dogs playing cards on the wall, and the tv remote will be controlled by a clopper. Clop On, Clop Off. The owner would nag "we never go anywhere anymore - what do you want to do with your life? We never talk." The horse's giant head would sway toward the owner, eyes rolling balefully, as if to say "you talkin' to me?"
Posted by phlegmfatale at 12:01 PM

I love the image of the pot head pony.

I have never seen a pot headed cabello. That is too cool. And I love the visual of a stoned out horse chillin' and watching Mr. Ed reruns.

fuzzbox - Yeah - it's great to think about - forelegs on the floor, big horsey ass planted on the sofa, helpless sofa bowing out on either side from the strain of a half-ton of horseflesh. Horsey belching and farting, shaking his unkempt mane. Wi-hi-hi-hi-hi-hi-hil-bur!

Gorgeous horse ..... he looks so serene I can't think why he would need a joint - but maybe that's why he's serene?

I haven't seen a horse on "the horse" yet,

They'll be changing the words "gee up" to "shoot up" soon I guess.

I know, awful jokes, I've had a crappy day.

Just don't let that stoner horse into your head shop. He'll eat up all the profits and leave cheetos bags all over the floor.

Erin here... the proud owner of the stoner horse and future partner in the head shop "the stoned pony"

must say... the whole story was perfectly crafted... but i just love the "clopper"...

It's embarassing to be laughing so hard (at work)that you actually snort.
I'm blaming you if they fire me.
This is hilarious.

Arabians are some damn fine horses even though they're a bit small.
Looks like they fit each other just fine.

One of my favorite foods is horse jerky.

mary - I have been promised a photo of eyes at half-mast, and I'll post it as soon as I get it. Yeah, he's a mellow guy

ben heller - not SO bad, you elicited a snort from me, and that rates

barbara - The Stoned Pony will definitely be off limits for a reprobate like Pops!

elgitano - ERIN!!! Glad you loved the story about your juvenile delinquent horse - and thanks - the Clopper was a moment of pure inspiration - I'm rather proud of that one, the pony keg and the horse's baleful expression. Hyuk! Hyuk!

lj - *deep, cleavage-baring curtsy* So glad you were pleased. If work complains, tell them your abdominal soft tissue organs needed a massage - it was therapeutic.

dick - yeah, they are marvelous beasts, and Erin is a gorgeous girl - even more beautiful in person. The first time I saw her in her practice riding gear (with the high boots, jodphurs and all) I said "DAMN! You look amazing!" Apparently it's a great workout.

lightning bug's butt - horse jerky? Seriously? Is there really such a thing?

Oh, and when I was saying to jean earlier that I like the Matador - I was referring to Erin's Matador shirt - I think the practice of bullfighting is pretty disgusting. The only consolation to that practice is that occasionally, the bull wins.
The shirt is called the Matador because it's a flashy, spangly think like a suit of lights.

Love the "Stoned Pony". And the clopper.

You crack me up.

o.g. Glad you enjoyed it all, honey, and as ever- it's nice to hear from you. Yeah, Erin is gorgeous, and she has that once-in-a-lifetime pet bond with this horse. I can respect that, because I'm that way with my dog - so meant to be together. Erin had her horse with her in her wedding photos - they're really extraordinary.

damn cowgirls are cute. I've known it..don't jump my shit...it's just you don't see many here on the streets of plastic.