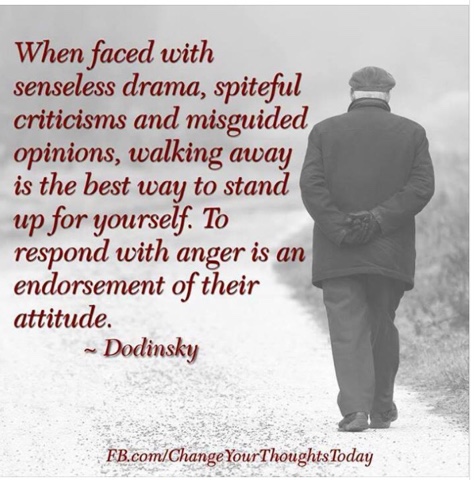 "If you speak to others the way you speak to yourself, you probably won't have any friends." Cynthia Occelli
Banish negative self-talk: it does not improve your situation.
Posted by phlegmfatale at 10:48 AM 1 comment: 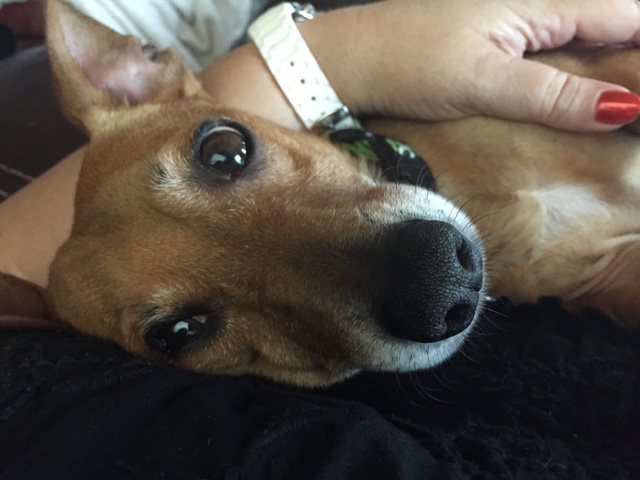 This is right after I returned from out of town. He missed me, apparently. :)
Posted by phlegmfatale at 10:46 PM 1 comment:

Some of the best mother hens are fathers.

In a world that often serves up a parental crap-shoot in which you're lucky to get just one good parent, it's an embarrassment of riches to end up with two. I (and my siblings) won that lottery.

I've always said that Dad is a mother hen, but I chuckled mightily when I saw this photo of chicks seeking refuge under a rooster. Both my folks keep track of their chicks, and prefer when we're all back visiting the nest. They watch over us and take care of us, and they always have.

Dad's birthday is today, and words are inadequate to express how proud I am of him, and how much I love him. He and Mom are a rock for us, and we'll always be their babies. That's a great feeling.

Happy birthday, Dad. And many more. :) 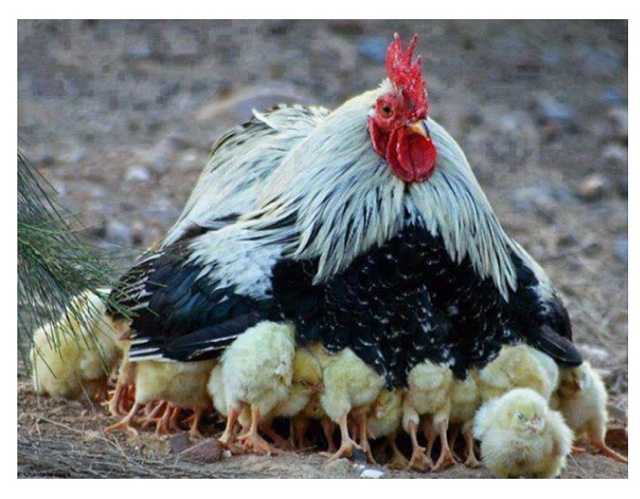 Posted by phlegmfatale at 9:59 PM No comments:

Thoughts on Game of Thrones

I generally don't watch television, but I do adore Game of Thrones. This post will be spoiler-ish, so if you don't want to read a spoiler, then stop now.

I was not happy with the way all my favorite characters were left in perilous, cliffhanger situations this time, or worse: dead.

Sansa - did she die when she jumped off the fort wall with Reek? I don't blame her for doing whatever it took to get away from that monster they made her marry, but sheesh. I hope she survives and that Brienne and Podrick will be able to save her.

Stannis - what a bastard! I can't believe he let that witch kill his daughter. Not worth it. The witch is awful, too. So glad Jon Snow resisted her - she's an ass. Her death will be one of the more welcome of the entire series.

Jon Snow - NOOOOOOO! He can't be dead! If he is the illegitimate offspring of Ileana and one of the Targaryans, then possibly he, like Danerys, can't be burnt. Maybe he'd be revived in a funeral pyre, particularly if someone else died? (Only death can pay for life). Whatever the case, I don't think he's dead. He can't be dead. It ruins all my plans for the show. So there.

Danerys is alone in the middle of all those Dothraki, who obviously know who she is. I think her red dragon will come save her. I also think her other dragons who are captive in the dungeon will break free when they realize their mummy is in peril. Having attack dragons is an excellent arrow in one's quiver. Whatever the case, I'm sure that after some brief struggle and blah blah blah, she'll add the entire Dothraki race to her growing list of subjects. It will be interesting when she crosses the narrow sea and takes back all of Westeros. Also, if Jon Snow is her half-brother, well, that would make for interesting alliances, as well.

Who among all the cast would know Jon Snow's actual parentage? I think Varys, but he also knows how to keep a secret. Still waiting on tenterhooks for that bit of info to trickle out.

In Season 1, Episode 8 (my favorite), Bran says that their brother Rob is going to King's Landing to bring back their father, mother and sisters, and Rickon, the baby, says "no, he won't." Such wisdom in such a wee lad - what did he know? He was absolutely right - did he know that most of his family was about to die? I was surprised there was no appearance of Bran or Rickon in this season, and I look forward to their return next season. Also, Osha needs to be in lots of future episodes - LOVE her. Natalia Tena is such a delight to watch.

Finally, my favorite character, Arya. The God of Many Faces knew who she is and what she is about from the time she arrived. She is a teenage girl who is proficient with a small sword called Needle, and every night she repeats a litany of the people she means to kill. The people on her list were the ones who killed her father, her mother and her brother. It's not like the people (or the god) in the temple in Braavos didn't know what her raison d'etre was when they gave her refuge in the temple. So why did they get all heavy on her when she killed one of the people on her list? After all, he very likely killed the First Sword of Braavos, a person of great local distinction, and he needed to die for that and many other reasons. I'm wondering about the God of Many Faces - seems a malevolent thing, at best. Anyway, Arya needs to get away from there, fast. If she is diminished and/or killed in the future, I'll be really pissed off.

I only have 9 or so months to wait to see how it unfolds next time, right? At least that will be something to look forward to during the Spring Semester. :)
Posted by phlegmfatale at 1:00 AM 3 comments:

The summer continues apace, and all is going well with my jobs on campus. The work has become routine enough that I'm able to listen to podcasts during my tasks, and I look forward to re-listening to class lectures during the semester. I'll keep both jobs and continue them probably until I finish school.

I'm making a quick trip to Dallas on Saturday, and I'll meet friends for lunch at a wonderful Dim Sum place. I have a couple friends who have parents in the hospital, so I'm going to try to visit them, too, then swing by the house of a girlfriend whose White Russian Fig tree is bursting with ripe fruit. Sunday is my dear Dad's birthday, so I'll spend Saturday night with Mom and Pop and come home and make a fig/brandy jam recipe Sunday night, before those figs go plumb off.

Dinners lately have mostly been salads, and that's been refreshing after such hot days. Lately I never use a salad dressing, and instead put about an ounce of goat cheese on with mixed baby greens. I've also discovered what bargains can be found at Aldi's, and those bags of small colorful sweet peppers are about $2 less than they cost at the big grocery store. Those peppers cut into small slices make a wonderful combination with the goat cheese. A nice big tube of goat cheese is about $5 at Sam's, and it stays good for a long time. Yummy.

I've been doing lots of walks lately, mostly at night, but in the last two weeks I've slept better at night on days when I do my 3 mile walk  early in the morning. One neat thing about my jobs is that I do a fair bit of walking while I'm at work, so that pushes my mileage up considerably. My phone has a health app that keeps track of the miles you move on foot throughout the day.

I hope you're having a great summer, too. :)
Posted by phlegmfatale at 10:04 PM No comments:

Went for a 3 mile walk at 7. Sitting out at 9:30, having hung clothes on the line. Praline has been gamboling in the yard, but came over to see me, dirty smudges and all. She is so very sweet. :) Then the other two came over to join in. :) 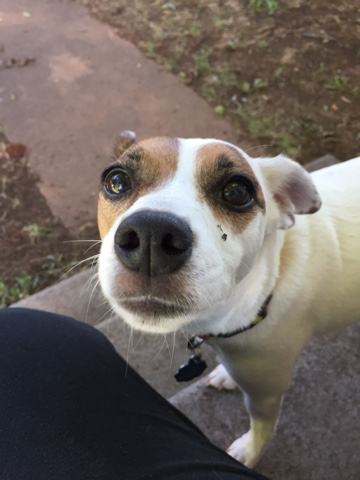 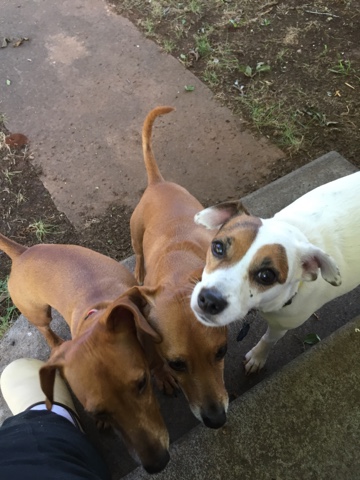 Posted by phlegmfatale at 9:31 AM 2 comments:

As usual for me, the summer has been extremely busy.  The unseasonably cool and wet weather means that I've got a handful of growing things in the yard that are thriving, to my delight. It's a joy to cut a handful of basil for the kitchen, or mint, or rosemary. For the first time ever I have a goodly batch of Nasturtium grown from seed that are thriving and blooming continuously, to my delight. The extra rain has helped to keep this stuff alive. Also, all drought restrictions have been lifted for this area, and that is great-- it's legal to water plants and flowers again.

I took a small job at the university as student labor. I'm confident I could have taken my old job back at my previous pay rate, but the university job is low-stress, and I can keep the job for the remainder of my studies.  The second week of that job, the head of another department saw me working and asked if I knew someone who would be willing to work 10 hours per week in his department, and I got that job, too. :) Both my bosses are good guys, and I appreciate not being micro-managed. My tasks are fairly simple and tedious, and I get to listen to my music or podcasts or Pandora all day, so the task is made pleasant. So far I've been listening to author interviews like Terry Pratchett and Douglas Adams, and it's been great to hear those wonderful minds at work. I expect to keep both these jobs after the school term begins at the end of August. One job expects me to set and keep certain hours, but they will be flexible if I need off for classes, etc. The other job is perfect, because I just come in whenever I want, and work as long as I want, as long as I don't go over 10 hours. I'm also not chained to a desk and get to move around quite a bit, so I'm getting exercise in addition to listening to good stuff on my earbuds. Win/win/win!

I made it in to Dallas for Father's Day, and I'll be going back in a couple weeks for Dad's birthday. I'm trying to make sure I have some time for goofing off with friends this summer. I've been sewing and fiddling about with fabric, so that is fulfilling, too. I had an idea for a dress design I'm really excited about, so I'll be eager to see how that will turn out. I'll let you know.

Also, sometime last year I cut what felt like a mile of pink seersucker into a 2" strip to make binding tape for project embellishment (probably around a quilt, at some point, too). I finally started forming the strip into binding, and the Simplicity binding tape tool worked a treat. I'm very pleased with the outcome and I'll post a picture.

Having a very nice summer, so far. I hope yours is lovely, too.
Posted by phlegmfatale at 9:43 PM 2 comments:

This lovely thing visited my cucumber plant today. Nary a single fruit on the plant as yet, but at least it brings pretty visitors to the yard. 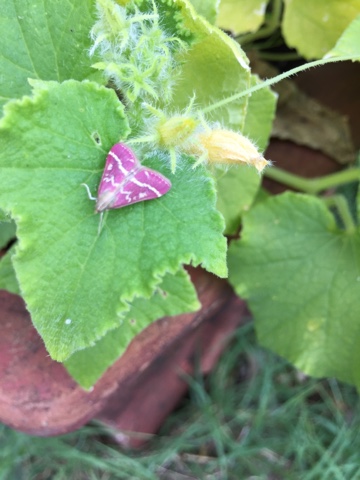 Posted by phlegmfatale at 8:30 PM No comments:

Shy and elusive, the horse-faced hummingbird is rarely seen in the vicinity of humans. 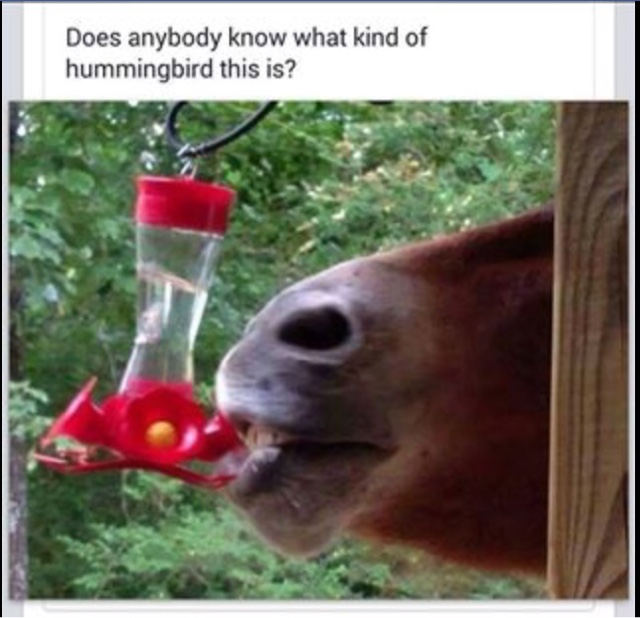 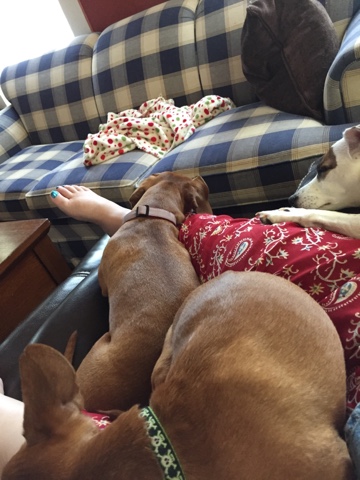 LI've done 2 loads of laundry and the first must be dry on the line by now. I want to get so much done today. Do you think the puppies will let me? Suddenly, I feel nappish. *yawn* 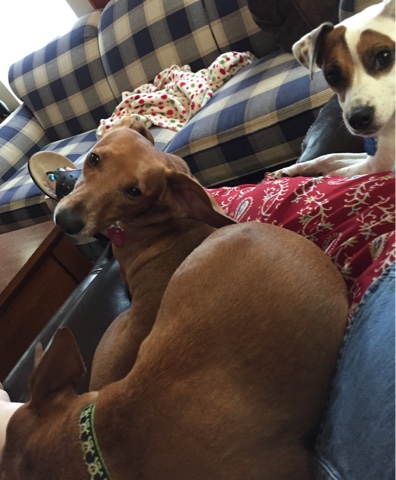 Definitely a conspiracy.
Posted by phlegmfatale at 11:33 AM No comments: 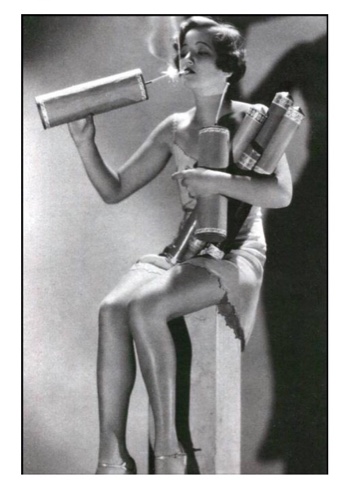