Overshooting the mark: journalism is in trouble.

On Saturday night, I was online watching a bit of the comedian who was the featured speaker at the White House Correspondents Dinner. In most years past, although all speakers take jabs at politicians and press in attendance, the spirit is generally one of detente, and the jokes that are made tend to skew to the friendly/jesting side of the spectrum, fostering a sense of shared purpose. One of the best examples of this was when George W. Bush took the podium to give some semi-humorous remarks with a comedian who bore a strong resemblance to him and who translated the remarks from the original. Bill Clinton also set a high bar, too.The effect was self-deprecating and good-natured, and set all at ease, because the occasion was actually to raise funds for scholarships for future journalists. Oh, and he and his impersonator managed to be, you know, actually funny without insulting anyone or venturing into blue territory.

Famously, President Trump skipped the second WHCD of his presidency for the second time. After all, he can hear punitive attacks from the media and celebrities-- ad hominem and otherwise-- 365 days per year, so why should he subject himself to being a captive audience to endure more of the same? If you want confirmation that he was right to skip the event, check out the video on YouTube that is entitled "Trump Destroyed by Comedian *name* at 2017 White House Correspondents Dinner." Apparently detente and gentle chiding are off the menu for WHCD. So, remind me again why anyone thinks Trump should attend?

This year's WHCD was in keeping with the tone set last year by the WHCA with the 2017 speaker. When I heard the first jabs at Sarah Sanders, I thought "I guess Kathy Griffin wasn't available?"  As the comedian lobbed one vicious barb after another, it suddenly struck me that perhaps the comedian was actually hired by Trump to confirm what he has been telling the public about the extreme bias of the media, because her tirade couldn't have been a better campaign ad for Trump if she had begged people to vote for him in 2020. It turns out that she works on The Daily Show, which is an infotainment show that lazy people conflate with actual news, one that shills for whoever is running against a conservative for anything. Indeed, the comedy routine was so heavy-handed and polarized that I could just imagine how giddy Trump would be made by the bog-standard affirmation of what he has been saying all along about media bias. So, yes, I think she and whoever opted for a Daily Show writer for that occasion must secretly long for four more years of Trump, because this is part and parcel of how they will get four more years of Trump.

Then again, if the peace is confirmed to be finally brokered by Trump in Korea, four more years of this may not be a bad thing.

ON FURTHER REFLECTION  (written one day later): Considering how much of Donald Trump's schtick was been predicated on yuge spectacles, this "roast" was probably in keeping with the political tenor of the times. I am a fan of vulgar humor, certainly, but I guess I am disappointed by the lowest-common-denominator face that is put forward by the WPCA. Although humor is notoriously difficult to write, it seems that the presentation could have been more sophisticated. If the goal was to shame or humiliate the president, I think that would have been more effectively done by out-classing him, rather than rushing to play the tune he's called out so effectively. Considering how the eyes of the international community are on the WPCA, vulgarian efforts to distance themselves from an embarrassing administration seem only to confirm that all strata of the American political spectrum are tacky and resolutely low-brow.
Posted by phlegmfatale at 4:42 PM 2 comments:

More varmint zen with this glorious video of capybara hot tub hijinks. These clever creatures luxuriate in this spa-like setting all the live-long day, and have even trained their human servants to throw fresh fruit into the water on which to snack. Sweet!

I heard or read somewhere that a prominent biologist said that if weasels weighed 65 pounds, there would be no other living mammals left on earth. Amazing!
Posted by phlegmfatale at 11:38 PM 1 comment:

For your viewing pleasure:

I see this video and I want a desk weasel so desperately, and yet I know I can't handle a desk weasel. I have a 15 pound dachshund version of this thing, and I can't handle anything more small and wily than that. Admiring from afar will have to do for me, so here is a 2:38 interlude of desk weasel zen for all of us to enjoy:

I was saddened to hear this week of the death of fellow Arkansas native Bob Dorough, who died April 23, aged 94. Most people will remember him one of the male voices of Schoolhouse Rock on television. He sang on some of the tracks, as well as composed all the Math pieces for that series, and for many of us, that is a soundtrack of learning some basics of math and grammar. While more people will be familiar with his Schoolhouse Rock work, I loved his tongue-in-cheek collaborations, like Blue X-Mas with Miles Davis, and the song he co-wrote with Dave Frishberg called "I'm Hip." Blossom Dearie did a wonderful rendition of that song, but my favorite is by John Pizzarelli:


R.I.P., Bob Dorough, and thank you for making music that makes me smile.
Posted by phlegmfatale at 12:25 PM No comments:

On Valentine's Day, a former student armed with guns murdered 17 people in a high school in Parkland, Florida. From March 2 through the 21st, a man sent home-made explosive devices to homes around the Austin area, killing two people and injuring five. Two days ago in Toronto, a man in a rental van ploughed along about a mile of pedestrian path, killing at least nine and injuring many more. What is the common thread running through all these stories, and how do they differ? Each one of these events was caused by a person who deliberately set out to kill as many people as possible. How they differ is the fact that many blame guns for the actions of the individual in Florida, but no one is protesting the manufacture and sale of the components of the home-grown explosive devices, and no one is screaming for more intensive screening processes for the rental of vans, either here or in Canada. The attacks in Austin and Toronto are a reminder that murder is caused by humans, and the method of delivery is really only a matter of semantics. So why are we bent about one method and not that bothered about the others, as a society? It is time that people focus on the real problem-- the human problem-- rather than the instrument of choice.
Posted by phlegmfatale at 12:21 PM 2 comments:

The blog links will come back, but I won't have time to track them all back down until the semester is over and the dust settles somewhat. I am grateful to my dear friend Kim for sending me my images from the blog so they could be reinstalled, because for yonks just had advertising on my blog from the place that decided to hold my images hostage.
Posted by phlegmfatale at 2:13 PM 2 comments:

I can't believe how quickly this semester has evaporated. I have a great deal of writing to do to complete my tasks, but it is mostly pleasurable writing, and I hope to get at least half of it completed this weekend. I am much occupied with a handful of papers I must complete in the next two weeks, but I do have a handful of specimens I need to get planted before summer's furnace arrives (I predict we'll see it by the end of May). We've already had a couple days in the 90s, one day reaching about 97. Ugh. Still, my sympathies to our neighbors up North and East who seem to have been more piled under snow this year than not. Count your blessings, because the rest of us appear to be marching resolutely back to drought status, we lucky few who emerged from drought for a couple years. 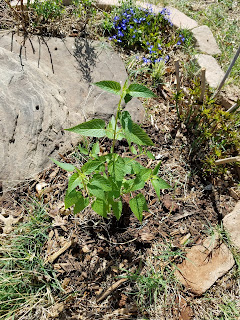 This morning I planted a bronze fennel at the front corner of one of my rock gardens (around a boulder in the ground), and at the back I planted a lovely specimen of Agastache rugosa called "Little Adder." I think it's also called Anise Hyssop, and it is a variety of hummingbird mint. They are water-thrifty and heat-hardy, and the hummingbirds love the nectar of their flowers. Doubly-delightful, they have the most beautiful flowery/minty fragrance. I have one established hummingbird mint of another variety, and I have two more specimen to plant in the next week. I also planted a beautiful phlox in front of the porch.

My catmint is going bananas, so I'm cutting bits of it off and taking it to friends at school who have cats. It's a beautiful plant and has a lovely fragrance, too. My catmint is the Blue Wonder version, and it's beautiful. I'm thinking of planting a mess of it in another area, if I can figure out how to transplant new growth. 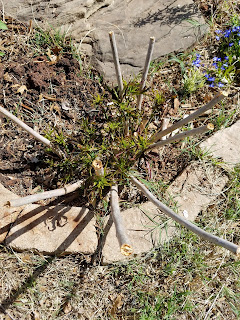 The new shoots are coming up on my Texas Star Hibiscus, and I am thrilled. Several perennials I planted last year have new growth coming in, and I can't wait to see how they do. Also, my Blue  Glow Globe Thistle from High Country Gardens is looking lush and lovely, and I can't wait for its spectacular blooms this summer. :) Also, High Country Gardens is a great resource for many varieties of Agastache (Hummingbird Mint), and that's where I obtained the specimen that I put in last year. I can't recommend High Country Gardens highly enough for their excellent specimens. Also, their website hosts a wealth of information on heat-hardy perennials with regional/zone breakdowns, and emphasis on plants for the particular pollinators you wish to attract (all of them!).

The upper photo is the new Agastache, and the lower one is the new shoots of Texas Star Hibiscus nestled among the canes from the previous year. Last year, there were about a dozen canes, and so far, I have counted over 30 canes of new growth. I'm leaving the other framework to protect the new shoots, since a neighbor runs their dogs through my yard. I'm just hoping I don't regret putting other new things in the area, because it's heartbreaking to toil over my flowers and then find they have been trampled.

Posted by phlegmfatale at 9:10 AM 7 comments:

I absolutely adore this: