Yes, since acquiring a DVR feature on my cable television, I've gone to the edge and been sucked into the vortex of crap television. Having the ability to watch later and zip through the commercials has completel 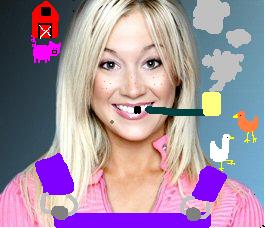 y changed my tolerance level for tv. I hate all the fake suspense, and I hate most of the reality shows, Project Runway being an exception, the contestants having to bring more to the table than a certifiable pulse.

Late last season, I began watching American Idol. I know. The shame. The shame. Anyway, there's a 21 year old woman from North Carolina who has been working the extreme hick angle overtime.
Simon: You're a minx!

In perhaps the strangest segue, out of morbid curiosity, I was flipping channels and stopped on Home Shopping Network, or hell, as you may prefer to think of it. Hawking some Birkenstock-like sandals that could easily substitute for birth-control was an enthusiastic poofter German guy with a mah-velous manicure, darling. Anyhoo. He looked a little like Trey Parker, co-creator of South Park. Fondling a denim monstrosity of a handbag with a metal snap-ball closure, he said "I just love those big balls!" and you know what? I'll bet he does.
Posted by phlegmfatale at 12:01 AM

Haha - I can't stand her either!

I am sad Chicken Little is gone, although I am hoping Elliott will win.

Seems like South Park is an inspiration to all of these crappy programmes. Sometimes I'm so glad we have the BBC. I know a lot of Americans would say why pay $200 per year for Public broadcast stations, but the quality of programming is something I'm quite proud of.

heather - chicken little was my mom's favorite. Elliott has a fantastic voice - I like him, too.

ben - yeah, BBC rocks - I pay for a high-end package with my cable provider just so I get BBC America. It's worth it for Little Britain, alone. Those skits with Bubbles are astonishing. I don't hyperventilate laughing very often, but I have done twice when skits with that character were on. Good stuff. Also, BBC does series versions of literary classics that are of impeccable quality, such as Pride & Prejudice and Bleak House.

You are making me wish I had cable.

Okay, I confess.
I watched that pig for the first time last week and saw the tramp you're talking about.
Somebody grab a pistol and shoot that woman.
I've never seen such horrible acting in my life and NOBODY has that screwed up of an accent.

Chicken Little really had no vocal talent at all...and he looks like a squid. I believe all the openings on his face are too small.

At least Pickler is hot. Hotness always brings in the ratings.

Chris rocks...he's really talented. Katherine has both the voice and the looks.

Paris keeps doing those ghetto moves while she sings 50s songs...kinda gets on my nerves.

So...when I ditched the television six years ago (and after the withdrawals stopped), I figured I'd done a Good Thing. No more geared-for-the-brain-dead "entertainment," no more wasted hours. Instead, I would spend the time profitably. Improving my mind. As it turns out, judging by this entry, I have merely made deeper ass-imprints on the sofa and deprived myself of the material for a really great rant.
Laughed aforementioned ass off reading this.

Hey Pickler, 1985 called and they want their belt back.

If it was left up to me, Chris would have been declared the winner week one. Then we would have to suffer through the rest of this crap.:)

well I think it cant be worse then what I am going through at the moment, as you know i am stuck in this little village and in my hotel room there are only german or austrian tv chanels,
this wouldnt be so bad if they didnt dubb everything in german, last night I had a choice between Booliwood movie dubbed in german (original indian songs not dubbed) or Police Academy no. 5 also dubbed in Germa. Of course I switched to MTV but then I ended up watching Jackass which was even worse

I don't have the link on me right now but there is a website called Vote for the Worst that takes on the story of Pickler and various parts of the Pickler. It is not a flattering story at all and points out all kinds of inconsistancies in her story.

I can't stand the Pickle. Aoh mah gawd, they gave me fawlse eyeuhlashes! I ate skuhwid for thuh fuhurst time and they cawl it...cahulamari? God, I just want to smack the shit out of her.
I'm a Katherine/Elliot/Taylor fan myself. You can also blame me for subjecting the cabana boy to the AI trashfest.

And I'm sorry but "I just love those big balls!" was heard in the Big Gay Al voice in my brain. It just...fit.

I happened to catch last night's "results show" and just laughed out loud. Could she be any more of a stereotypical dumb, airheaded blonde? Geez.

I'm not one for those "reality" shows like American Idol, but I have to say that I did enjoy Project Runway (though I don't think the Asian girl deserved to win - her stuff was CRAP. Maybe they had to fill a racial quota?), and I did watch last nights episode of Unanimous which just made me want to play, too. TORTURE them, I say. Turn the heat off. Have a light flicker. Just mess with their heads. MUAHAHAHAHA. It's a good thing I'm not in TV.

I haven't been watching AI, but I can relate to the impatience of suspenses and commercials, as I have a DVR, too. Even if I'm home, I don't even watch anything live anymore, just to avoid the commercials.

I was talking to a singer who did quite well on the Uk X factor. He told me Simon was a real sweethart.
I don't think so.
Whilst I know the blunt tv persona is exagerated. I suspect he turns on the charm or harm according to which suits him most.

dick - yes, stupid-acting, and an even worse dancer - she looks totally unnatural when she's on stage, writing like a cat having a greasy string pulled out of its ass. Yuck.

rose read - Just come back here honey, and I'll keep you updated on all the crap that's not fit to watch on television. Really, I'm doing it all for you, taking one for the team, as it were.

o.g. nice to see you, hon! Yeah, the big balls thing was priceless!
I'm so glad I'm not the only one who sees through pickler - she's annoying as shit

mauser girl - Yeah, I LOVED Santino on Project RUnway, and thought that it was insane that Chloe's Carrie-style prom nightmare collection won - horrors! That Unanimous thing - looked like pure torture to watch

becky - I'll never be without DVR again. If I have alzheimer's someday and they coop me up in some place of "rest", I'll make life a living hell for everyone unless they give me my DVR, which will probably be an arm-implanted remote, by then. Yee haw!

tickersoid- I think Simon has a very discerning ear, and doesn't sugar coat his critiques. Having trained for a professional career in the music industry, I can say his type of criticism is par for the course - it's a brutal industry and you have to take the critique impersonally and work on the flaws in your performance, otherwise you'll never improve. That's just the way it's done. I like him - Simon makes more sense than the others, although he DOES go a bit overboard, sometimes.

Good news. Vote for the worst is now pulling for Pickler since Chicken Little was bumped off. The address is:
http://www.votefortheworst.com/index.html

ok, my response to dick was s'poseta say "Writhing" like a cat...


Sister says Kelli does the "crap squat." That so hilarious and perfectly descriptive, why didn't I think of that?

I had actually never watched this season of Idol until Tuesday's ep., I usually check in once a season to see just how horrible it is, I actually saw Pickels perform, that was supposed to be good per the judges. Butchering the shit out of Patsy Cline. Must be something in the water in LA.

I have a TiVo, so yes, it is so much easier to watch crap when you can skip the commercials. Also, I have a theory that (thanks to The Daily Show and Best Week Ever) watching crap does not harm your intelligence, but instead gives you material to craft a smart/funny critique.

See, now if we're talking a "crap squat", I'd look at Bucky. Poor kid looks like he's trying to drop a load every time he sings.

By the way, I replied to your comment on my page with an email. Don't know if it went to the right place though...

will - now that I can skip commercials, tv certainly gives me lots of channels to vent my hausfrau rage!

o.g. - got the email - was too swamped at work to respond today - Glad to see you! Bucky - I just don't know about that boy. I wish he'd do a better job of song selection - I think he'd sound a lot better if he had some good advice about what to sing. NOT that I think he'll be around much longer - 3 weeks at most.

oh Phlegmmy! Honey, don't you know that watching American Idol kills more brain cells than a fifth of Black Jack and a flame thrower in the back 40???

Yeah, rocky - I'd say it kills more brain cells than 10 cent drink night in a gay disco with a pocket full of dimes and a fresh vial of amyl nitrate. woohoo.