I am furniture for pups! 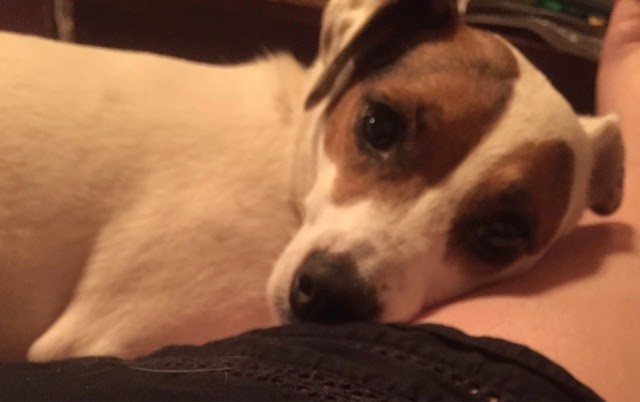 Here's a cute video I hope will give you a giggle.
I love you. :)
Posted by phlegmfatale at 6:35 PM 2 comments:

Rather adorable. Lusty month of May, with myriad tornadoes gaily tripping about the place.
Posted by phlegmfatale at 3:38 PM 2 comments:

A tale of woe.

I will preface this by saying I am not a medical professional, but...

I was talking to a girlfriend recently and she mentioned an injury on her daughter's foot, and said she'd treat it daily with peroxide. One profound and (to me) shocking thing I learned in nursing school is that while peroxide can initially be useful for bubbling debris out of a messy cut (like a badly skinned knee with rocks and sand and dirt in the wound), hydrogen peroxide is generally not recommended for wound care. Peroxide dissolves proteins. This is no bueno for your healthy tissue, which is in part made up of proteins. Peroxide is used in industrial applications for many things, including as a corrosive agent to clean metals. Yes, hydrogen peroxide will kill germs, but it also is now believed to kill new cells. The new cells are what you want to promote healing of the wound. A bottle of sterile saline is better to keep on hand for irrigating a wound. I would only use peroxide for such a thing in extreme conditions where nothing sterile was available to work with.

Similarly, alcohol is also capable of burning your skin. Here's a link to some myths about wounds and wound care, which includes more detail on peroxide and alcohol. This site acknowledges that there is a debate over the use of hydrogen peroxide on wounds, but based on what I have learned, cleaning with a mild soapy solution and keeping a wound moist with anti-biotic or anti-fungal cream as appropriate is a better approach. Many believe that even if the peroxide isn't actively doing damage, it at least slows the healing process.

Since I've always been particularly interested in wound care, I asked my MedSurg I professor about why the practice of using hydrogen peroxide and alcohol on wounds has not been more prominently debunked for the general public. She said that nurses have not really taken that on as part of their education campaign, and have perhaps focused on bigger-picture concepts when educating patients. I really think this is something that deserves greater emphasis.

When I was a kid, I wore the shoes that were of the then-current style. These often had synthetic linings, and my feet would sweat and break out in watery blisters. (leather linings, for me these days.)  Thinking I was helping the process, I'd wipe peroxide on my feet before bed. After a few nights awakening with a burning sensation on my feet, I decided that perhaps the peroxide was not helping. Then I pretty much forgot about this for about 40 years.

LawDog told me that early in his career he worked as EMT/security at an industrial plant. They kept a form of peroxide on hand for cleaning copper. He said a 55 gallon drum of a blue type of peroxide (this was probably not hydrogen peroxide, as there are several flavors of the stuff) was hit by a forklift and gushed over a man's leg, and the flesh of his leg dissolved down to the bone before the chemical could be irrigated away with a water flush. A tourniquet was applied at the thigh to prevent further loss of blood, and of course, he lost the leg. Ouch.

I met a woman a couple years ago who told me about her husband's demise. He was a house-flipper, and was frequently banged up from his usual activities in prepping houses. He banged the thumb on his non-dominant hand with a hammer, and smashed it pretty good, but he didn't see a doctor. He kept it bandaged and nursed it along with hydrogen peroxide. It was nearly healed and he was going without a bandage when he smashed it with a hammer again, and this time much worse. He practiced self-care and would not show it to his wife. She noticed he'd had it bandaged for months and when she realized his thumb seemed to be increasing in size, she insisted he show her the thumb, which was in a ghastly state. She finally persuaded him to see a doctor, but the infection in his thumb was so advanced that he died quite soon of sepsis. The peroxide did not kill this man, I'm sure, but it didn't heal him, either. The lesson here is that non-healing wounds need to go to a doctor, STAT.

Again I say I'm not a medical professional, and there is not universal agreement on this issue. If you're reading this, you have access to the internet and I encourage you to seek out more information and draw your own conclusions. The Mayo clinic is gold standard to many folks, and here's a great basic site they have for care of cuts and scrapes. Make sure your hands are clean, and when possible, keep nitrile gloves on hand if you are helping to care for a someone with a wound that needs tending.

One of the things I find compelling about wound care is the profound ability of the body to regenerate tissue and to heal-- it's truly amazing. We have access to so much good information (and so much that is bogus), that it's easier than ever to manage and recover from injuries. A lifetime of perceptions is a lot to overcome, but it can be done, particularly when there are better alternatives available.

My sweet mother is in surgery right now.

I appreciate your thoughts and prayers for her well-being.

UPDATE: Thanks to all  my sweet friends who contacted me to wish Mom well. Her surgery went well and she is home and recovering.
Posted by phlegmfatale at 7:12 PM 1 comment:

I'm reading for lit class, and Chuy and Mochi are next to me in Snoopy pose, heads hanging over the edge of the sofa. So cute and sweet. 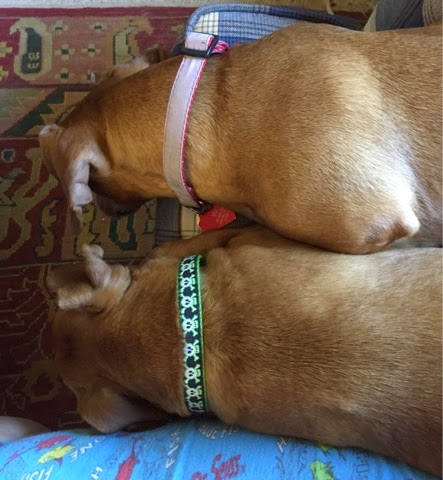