I've been watching the crap cinematic realization of Mich 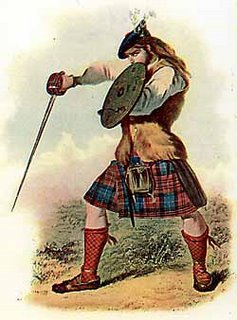 ael Crichton's Timeline, and trust me, it's a guilty pleasure, because there are Scotsmen in it, even if one of them is Billy Connolly. There is more schlock-per-square-inch in that film than in Wayne Newton's smalls, but I'm giddy with the antics, nonetheless. In the most odd sort of parallel, I'm reading a book called Outlander about a nurse who steps through a time portal between standing stones and zips back a couple hundred years and hooks up with a big beefy Highlander. Yes, I'm glad you asked: he DOES spank her, in fact. It only took half the book to get to that part, but they made it worthwhile. Besides - John Wayne spanked women all the time in films. What's not to like? Perhaps Michael Chrichton should throw in some spankies in to turn out a better film in future? It may not be germane to the story line, but it will be most edifying for the people who have to watch it, yeah?
Ugh - barely over two weeks until the California in-laws arrive to tell us what a squalid, lowly, in-bred existence we live here. Joy. Yawn.
Woohoo - going to lunch with my naughty twin Lisa today (Thursday), and then going to dinner with evil friend Liz. Sushi. Yum. Wickedness will ensue. Friday blog may be waylaid, and if so, I'll return upon recovering on Saturday!
Maybe my new shoes will arrive before dinner? Ah, bliss!
Posted by phlegmfatale at 12:59 AM

The Highlanders were a ballsy bunch. Probably due to the fact that they wore no drawers under those kilts.

That's what Phlegm, Liz and Lisa are going to find out I reckon, when they get together.

Did you notice Phlegm said Friday's blog will be "Waylaid" ?
That's a cryptic comment.

In Scotland, when a man lifts his kilt to show the crown jewels he always shouts out a loud "WAY !!"

I can't explain the "laid" part of Phlegm's comment.

I know exactly what a Scotsman wears beneath his kilt. I was there, I asked, they flashed.

As for Timeline, it is sadly lacking in a key attribute that adds to movie watchability - that of ninjas. Most movies need more ninjas.

Ghost? Needed ninjas.
Brokeback Mountain? Definitely needed ninjas.
Capote? OK, Phillip Seymour Hoffman negates the need for ninjas.
Dodgeball? More or less had ninjas and I laughed my ass off even though I expected to loathe the movie.

I did read Outlander and I don't recall the spanking part.
'Spanking' is not usually the part I look forward to in a historical scottish romance. I read Timline to and there is just no place for spanking.

Timeline is one of the best books I have ever read. The movie version was an insult to it!

As someone who wore a kilt as part of his school uniform, I must inform you that nothing was worn under mine.

It was all in perfect working order.

ah, Ben, you don't miss a trick, do you? The way thing sounds great, and the laid, well, it depends how much beauty sleep I decide husband needs tonight when I get home, primed no doubt by an indelicate amount of sake.

liz - I will point out that I called you my evil friend, and you made no effort to deny it. Tsk tsk - what a devilish pair people will think we are! I must differ with you vis-a-vis the ninja thingie in Timeline - I stand my my original premise that a spanking interlude would have improved the final product.

Well, barbara - you ARE one for details, arencha? Well, techincally, it was a whuppin' with a leather belt thingie, but I'm embroidering and imagining it as a spanking - seems so much more personal that way. Yup, it was there, smack dab in the middle, and to my dismay, the hero promised never to do it again, so I went back and re-read it. As for Timeline - since they made a bad movie (terrible choice of female lead, among other things) they may as well have pandered to people like me by throwing in a spanking.

Ian - I normally love Crichton - the 13th Warrior was one of my favorites - on your recommendation, I'll check it out.

tickersoid - *ears prick up* you wore a kilt to school? Hot diggity! I'm glad to know you're a man who does things the proper way!

Oi, yes that movie was a steaming clod. The book wasn't awful. And I have been a huge Crichton fan in the past. See "Sphere" (the book, not the film). Book = quickest read and best guilty pleasure EVER. Film = please someone slap the person who cast RainMan in another sci-fi thriller after the monument to mediocrity that was "Outbreak."

Don't hate me because I LIVE WITH a Scotsman.....Campbell of the Inverness Clan.....Quite the meat eater these days....

smilly - yeah, wannit? The commercials for Sphere looked so exciting that I went to se the film on opening day, only to find the commercials were better than the film - I don't know how they pulled that off! I felt cheated out of $7 - not a common occurrence for a film-slut like me. Oh, another ninja-phile. You people! No one agrees with me about the spankings. Alas.

Um, does envy count as hate? Good for you. Where'd you stumble across that gem?

Oh, way back my people were McCords but after most were wiped out (that Killicrankie thing didn't go too well), they came over to the mountains in the Ozarks and settled here. Maybe it's genetic memory that makes me want to see men in kilts? Dunno...

By the way, Inverness is soooo beautiful. Loch Ness, unspeakably so.

You are so right in that cheese we would call Timeline. The book was much better, but then again, I can't stare at Gerard Butler...