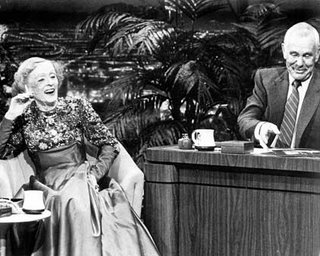 
Bette still living it up but looking shockingly ancient on Carson in the early 80s. Trust me - this is more garish in color, but I had a heck of a time finding it at all. On the other hand, the old gal was still smoking her balls off and was sassy as hell, so you can call it a good life, at the end of the day.

Anyhoo, my point is, sorta, after a young adult lifetime of exacting image control, it's a long way to fall when gravity takes its toll and people like Madonna start actually having fewer good angles from which to be viewed. Hence, the dazzle camouflage of Madonna showing her body to excess in every single appearance - distracts from wrinkles, loose skin, etc. Madonna's "look what I can do" desperation to show her flexibility is leading her down the path to looking like a garish send-up of the sad old yoga-cat-lady in A Clockwork Orange who gets bludgeoned with the big rocking wedding tackle mod sculpture. Not pretty.

Imagine what a different image Bette would have presented in a prim, matronly dress, eschewing her cigarettes to sit nervously and soak up some of the last bits of applause to rain down on a glorious cinematic career. Hell no. She put on a fancy frock that covered the stringy birdlike body, got her makeup on and her hair 'did, smoking the shit out of some cigarettes and probably swigging a good stiff whiskey in that coffee mug. Long may she wave. Wallow in it, darling, wallow!
Now, perhaps Bette didn't use sunscreen in the golden-baked Hollywood glam studio years, but 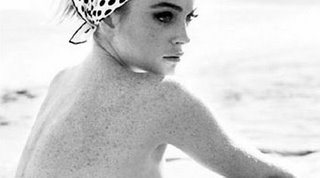 here in the 21st century it's just irresponsible for Vanity Fair to perch the über-freckled Lindsey Lohan on the beach without appropriate cover. Can you say "melanoma," boys and girls? There. I thought you could. Never mind her eating disorder, Flimsy may be due for an early demise if she doesn't stock up on the sunblock. I'm just saying.
Posted by phlegmfatale at 12:01 AM

so well written, so well put, you are one of the few people who can actually write. nicely done.

I am deeply complimented. Thank you, gb.

I suppose Madonna is trying to stick to what works but it isn't going to work for much longer.

when I was young, there were no seat belts in cars, No 'sell by' dates on food, No calorie of content list on them either.
I've spent a life time in the sun, ( ok so it's not that hot in blighty ) played with lead paint toys. We had asbestos roofs on our garages. I think people worry about too much today.

Don't get me wrong, I enjoyed this post, well written.

Btw, I like the 'I complete me' thing in your profile.

well said, fuzzbox. Oh, and I'll never forgive her if she dumps Guy - she needs to concentrate more on her husband and kids and less on what the MTV and haute couture crowds think of her.

tickersoid - Yeah, good points, all. I do think people spend too much energy trying to avoid what's going to kill them anyway. Research has proven that your genetic predispositions are more powerful than your lifestyle choices anyway - cancers, diabetes, whatever crap runs in your family, you're apt to come down with yourself. I actually like Lindsey Lohan, and I think she's a beautiful girl, and a good actress, I just saw an opportunity to yammer on about something, and I WILL go on about F.A., as you may have noticed! Glad you like the I complete me thingie - it was a bit of inspired smart-assishness that couldn't be left unsaid.

I had the same thought re: those Lindsey pix. I mean, it's obvious she doesn't spend all that much time in the sun ...

Thanks for the visit. Let's trade links; I'll get your up today.

Phlegm love: Wonderful post. The old days, ah. Women had self esteem to spare. Didn't have to remove their clothing and resort to look at me antics to be noticed. It's a shame, watching Madonna nowadays. I still hold a place for her in my heart, because she was a rock turner. She was a mover and shaker and few would have ever believed her career would have survived this long. But Lindsay Lohan? L-Lo? *L* She's nothing more than a flavor of the week. She'll never be taken seriously. And I doubt we will be discussing HER appearances on the late show in 20 years from now. Ugh, that tuna fish skin needs a sunblock of EIGHTY at least.

Miss ya doll! Stop by the blog sometime!

And of course I love nothing more then laying for hours in the burning sun ... I know one day I will pay for it!

PS - Congrats on the new purchases! We must be mind twins, I SOOOO would have gotten both pairs too :)

I saw on another site where you were a Kinky supporter. I knew there was another reason that I liked you :)I posted about his Dallas Parade exploit. What a candidate!!!

I'm not such a big LiLo fan, but then again, she's a teenager living in a grotesque grownup world, so I suppose I should cut her some slack. I will say, however, that in the photos of her in Allure magazine she is covered with freckles everywhere EXCEPT her breasteses. Hmmmm.

Her mama and daddy both need a couple of good smacks upside the head. This poor girl is gonna look back from the top of her mountain of money one day and wonder where the heck her childhood went.

I think that now we have entered the era where not only is it not taboo anymore for celebs to have "work done," but it's also accessible for the "every day person," we're not going to see octogenerians (sp?) all tore up and ravaged over time.

Whether the celebs exercise obsessively or get all that shit sucked out and tucked up... I don't think we're going to see folks "au naturelle" like that.

However, it does make me wonder what the hell Susan Powter will look like in her 80s...bald or not...

Yep, I already see one spot that's beginning to turn.

Sing it, sister! I laughed like hell reading this. Bookmarking you for later!
Thanks for visiting my the bead page
(little tiny beads @ blog.spot)

david - yeah, nor should she, for her hide's sake!

cp - great point - it'll be amazing if she doesn't burn out in the next 5 minutes!

heather - nothing wrong with freckles - they're cute - I'm just saying take precautions. The shoes ARE awesome - they got here this week. YUM!

rocky racquel - I can't believe you say breasteses - I do too! Anyway - I hope LiLo invests well, it can be a long fall.

nuggetmaven - I think you may be right - someday - there will be natural history museum dioramas of people before modern plastic surgery.

lj - Glad you enjoyed it. I'm a beady person, too, and I'll be back to your site again!