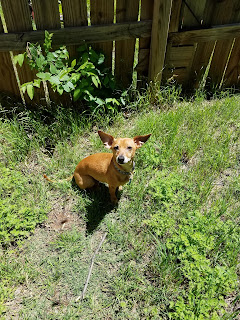 It's been in the 50s and 60s here the past few days, and it has been glorious. If you didn't know better, you'd swear it was January! I love it. Chuy, however, hates to be in the shade, and the sun was toasty. I caught him sitting with his eyes closed, basking. Then he turned to me and those gorgeous little ears snapped up, and I was able to get my camera out before he approached me to demand scritchins. He's my sweet boy.

Since Sunday is really over, let's just say 19 days until graduation. It's getting so close.
Posted by phlegmfatale at 11:54 PM 2 comments:

I have less than a month remaining in the completion of my undergrad degree. It is dazzling to consider, because it's been so long since I half-heartedly enrolled in a few courses at NTSU for the Fall of 1987. I have a raft of papers to write, but I expect only one to be difficult. I only have two tests remaining, but I expect them both-- in Spanish-- to be difficult. I feel confident of passing Spanish, but it is still stressful. I will get my campus work done early tomorrow so I can come home with a free afternoon to knock out much of the remaining assignments for the semester, as well as complete a job application.

Of late, I have engaged in some therapeutic gardening, and things are bursting into bloom here and there in the yard. I have chosen plants that complement the native perennials that are established, and I have chosen plants that particularly appeal to hummingbirds, bees, and butterflies. I expect that everything will be hog-wild by this time next year. It's odd to cast ahead to a year from now when my commencement will be rapidly shrinking in the rearview mirror. Odd, but good.
Posted by phlegmfatale at 8:29 PM 3 comments:

I have blogged so infrequently in the past year that I am remiss in spreading news on some good books that have come out.

My dear friend JL Curtis published a good book not quite a year ago. Rimworld is available on Kindle, and is a fun new take on the Sci-Fi adventure.  He populates his work with capable people who have the skills and intelligence to troubleshoot and come out on top in otherworldly situations. There's something to be said for people who can get things done, and who wants to read about a one dimensional character who never got axle grease under their fingernails?  Good stuff. His Grey Man series is worth checking out, too, even if Mom was a little peeved at Curtis for giving one character a more difficult row to hoe than Mom thought she deserved. ;)

I've read a bit of more stuff that he has in the hopper, and it's just getting better and better. I'll try to be a little more on the ball and let you know as soon as his next book is published.
Posted by phlegmfatale at 10:30 AM 5 comments: 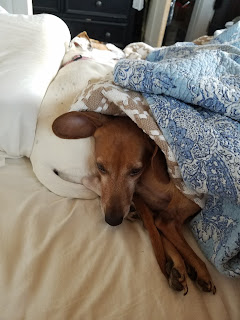 Y'all is owed a puppy photo.  Here we have the butts of the elder pooches, while Mochi's head is sticking out. Yes, Chuy's claws are long and evil. It's hard to get out of bed, though. they are such sweethearts.
Posted by phlegmfatale at 7:59 PM 4 comments: