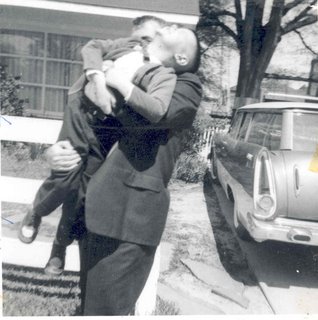 
Sunday's Toronto Star cites a Berkeley study here that says whiny spoiled children grow up to be conservatives, and confident, self-sufficient children grow up to be liberals.
Bullshit.
These 100 children were followed from the 1960s forward. I think this conclusion has more than a bit to do with the fact that the study was conducted in Berkeley, the incubator for fin-de-siecle liberalism. Naturally, in the hothouse of American liberalism, liberals WOULD feel confident and self-sufficient, buoyed up by such an enabling atmosphere. Someone who is a contemporary, independent thinker WOULD feel put-upon and paranoid in such an environment that does not welcome differing ideas. Seriously - for all their claims of open-mindedness, places like Berkeley are some of the most hostile environments to voice an opinion that does not fall in lock[goose]step with the herd.
Husband's comments on this issue:
I'm sure it was a double-blind totally objective study.
OTOH, if that's really true, then the future of our country is in great shape.
He's got a point - I see no end of whining children no matter where I go in the country. Yeah, even California. Then again, I'll be able to make a case-study about a California child in about a week-and-a-half. Film at eleven.
5 minutes later:
No wait, I just have to come back here and add a bit more, for my own sake. I am an artist, a free-thinker, and a wild person. I'm independent and have NEVER been a whiner - I don't even nag husband (he often says he wishes I would). I don't need alcohol or drugs to tap into my inner banshee - it's always there, just beneath the surface. I am open-minded and friendly, and non-judgmental of everyone I meet. I make fast friends to whom I'm devoted for life. Because of these traits, acquaintances generally assume I'm a liberal, and feel free to vent their paranoid ravings believing I'll agree with them.
Economically, however, I AM conservative. I think that some social services and safety nets for our communities ARE necessary, but I think that should be done at local and state level, and I think there are simply too many laws on the books at every echelon of US government. 60+ years of the New Deal have created an entirely new dependent class with no incentive to do otherwise than remain firmly clamped on the government teat. (Someday when I have more time, I'll tell you about my California relatives who enjoy the cyclical slavery legacy of our welfare system.)
And THAT, my dears, is why this study has me so cheesed off. No doubt, this bit of pap was funded by taxes confiscated from yours truly, and OK, NOW I'm whining. Let's see a comparably "objective" study made in an Indiana or Kansas farming community - backbone of our very nation - and I'll bet you'll see another result entirely.
I have a lot of stuff to do today, but I just had to vent. Don't be surprised if I come back and vent some more later, for my dander-she is up!
two hours later:
OK, I've had some time curled up with the wonderful diversion of a book, and now I'm calmer. Let me say this study infuriates me because it was conducted in the name of science and has been honed into a political spear. My blathering on about myself and what a study in contradictions I am makes the point that people are more complex than can be serviced by one political ideology, and the people who can be so straight party-line are not doing much thinking, in my opinion. In the John Lydon interview I posted a couple weeks ago, he said "Institutions will not ruin us," but to that I would add "unless we allow them to." This desperate need of the media to compartmentalize the populace into groups is a pat way to manage us and pretend to be addressing our needs and interests at large, when in fact, we as a society are more complex and differing. My balking at the implied "even-tempered cool" (Ted Kennedy? Cindy Sheehan? John Kerry? Really.) of liberals is based on my perception that it is a very liberal element of our society that is sullying freedoms I hold dear. I call it the hall-monitor mentality - the element among us who wants to prevent people from smoking, from plastering the ten commandments on public buildings while forcing us to turn to mecca at sunset, and who go see films like "Supersize Me" and the factually specious films of Michael Moore.
Mark my words: It is precisely this element that will be sifting through your grocery receipts looking for purchases of beer, twinkies and cigarettes to deny you medical services when you are in need late in life. Can a fat tax be far away? I think not.
Posted by phlegmfatale at 2:06 PM

Oh, I'm sure that study was not at all biased since it was done at Berkeley.

However, I will say this in terms of personal observation. I have found that parents who are conservative themselves - and I don't just mean in terms of politics, but overall - are usually much stricter parents who won't put up with all the whining and spoiling.

Frankly, I think the study makes a bit of a generalization. On the otherhand, if we look at our president, we see one who is arrogant, self-entitled, and not had to deal with struggle. He certainly was very spoiled as a child - and as a grown man. Assumptions are bad, however, and I have known a lot of spoiled people on both sides.

I have observed the same about conservative parents, mauser girl.

good quote, fuzzbox, whoever originated it.

I'm going to go back and add a wee bit more to my post. My anger at this is just that they claim no political bias, and yet this study turns into an opportunity to make a political point, which I find infuriating.

I think mauser girl is right with her observation about conservative parents being more strict and not allowing whining.

About your being open minded and non judgemental? The thing is, I don't know a single one of my liberal friends who has those traits. I'm not sure when it happened, but the stereotypical liberals of today are as closed minded and ignorant as the stereotypical conservatives of 30 years ago.

june c's revenge - your name cracks me up every time I see it - LOVE it! I agree with you and mg, of course.
What dismays me is the abject paranoia of my most liberal friends who can't discuss anything, they just rant, and it's more emotional than logical. The environment didn't just get screwed during a Republican administration. And as for funding, the government is bigger than ever and spending on everything has gone UP during this Bush administration - why aren't Democrats ecstatic? - he hasn't vetoed a single spending package - which makes ME unhappy, frankly. Remember, I said I want less government yesterday, if not sooner.

Maybe the High Strung Class makes up for a lack of youthful whining with a vengeance when they grow older.

"Whaaa! I want free health care!"
"But Nanny! I deserve a well-paying job!"
"Boo hoo! That person's hurtful remarks injured my self esteem!"

Sadly, most probably wouldn't even realize to make the same deductions from that study and will just believe it for what the media said. I must say that I admire anyone that can use "pap" without "smear" following. Nice work there.

Tam - brilliantly illustrated - they seem to do no end of whining NOW!

zelda - I'm thankful for the internet too - Thank you Al Gore! Yeah, finally, there is a less passive way to hold the assholes accountable for what they say.

becky - Wow - I was on such a rant I didn't even remember using the word "pap." *puffs out chest with pride* Glad ya liked it!

You realize all you people are encouraging my bad behavior? Someone might start thinking I'm spoiled and unruly

Great post, lots of food for thought. I think the study is way oversimplified, and begs to be torn apart.