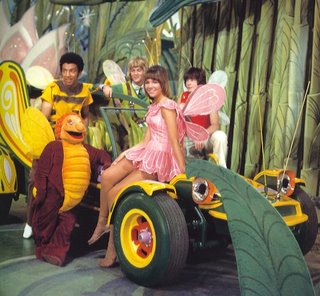 Phlegmmy's most girly HALLOWEEN COSTUME:
1970, I had just turned 5, and mom got me the coolest outfit - I was the girl bugaloo - I felt SOOOOO pretty! Proving you can be a groovy chick at the ripe old age of 5.

Oh, on the subject of the in-laws' new fancy digs - apparently husband and I are going over on Saturday night to take a gander at the place. Too bad my cell phone camera is on the fritz, or I could regale you with pictures as well as madcap tales afterward. More on that later...

Sadly, I finished reading Jonathan Strange and Mr. Norrell yesterday. As I was getting closer to the end, I slowed down and spaced it out rather than charging like a bull as per usual. The prose was simply too beautifully written to rush. It's satisfying when I read a book and none of it has turned out like I expected. Hopefully the 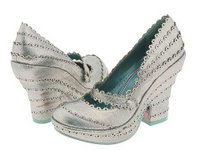 author will write sequels to this one.

Here is my current obsession, and can you believe it? For once they are not John Fluevogs. These are the cutest shoes I've seen in 2 or 3 weeks, honest! They are sassy. To paraphrase Air Supply, I can't live if living is without these shoes.
About Madonna's Angry Inch, for the befuddled in the peanut gallery: a few years ago there was a wild rock-opera musical movie (first it was a play, I think) called Hedwig and the Angry Inch about a man in Germany who wanted to become an American citizen and had a sex change to marry an American G.I., but the surgery was a bit botched, so now rather than being one gender or t'other, Hedwig has the ubiquitous angry inch.
Glad y'all like my new blog togs. Cat did an awesome job. Yes, I'm shaking my fanny a bit over here. Woohoo!

Posted by phlegmfatale at 12:33 AM

I LOVE those shoes!!!

Good luck with the in-laws, I am going out to see my own on Saturday too ... we will have to share stories!

Yeah, the inlaws - it's going to be a real treat.

Holy crap! I LOVED the Bugaloos!

Actually, I love ALL of the Sid and Marty Krofft shows: HR Pufnstuff, Sigmund the Seamonster, Lidsville.

I didn't like the live action ones with no puppets though, like Electra Woman and Dynagirl. Oh, and I didn't like Land of the Lost much either.

I met Billy Barty and his wife when I was 7, and already taller than both of them - that was a trip.

Being a 'retard' I was wondering about the Manona thing.
I've only managed to read about 5 books in my life. I know how good they can be so it's a bit of a loss for me.

Thanks for the xplanation of the angary inch thing...nar nar here...I've admired the Fluevogs from the comfort of my own monitor..will have to wait till I get a real job however....DH is a Land Of the Lost GEEK. Had to buy the DVD when it came out.

Hedwig and the Angry Inch is absolutely postively one of my...fiance's favorite movies.

Somehow, when I WRITE this, it concerns me.

Anyway...the SHOES are to die for AND Cat just got done with my Blog Tog...Up and running tomorrow.

I can see she does fantastic work!

Wow,rita, that kid from Pufnstuf died last week - 51 - throat cancer. I LOVED the bugaloo girl because she was pretty!

tickersoid - glad I could de-mystify the Madonna/hedwig thingie. Glad you like my soon-to-be-new-shoes. You may not read much, but you certainly write well.

schnoobie - I like LandOTL too, and I wanted to go as the daughter and dress my husband as a pylon for halloween one year - especially the light table with the glowing stones. Man, that was a whack show, wasn't it?

fritz - nah - don't be concerned - you're just not so easily amused as some other folk. Yeah, I can't decide whether to get them in black or silver... decisions, decisions... Can't wait to see what Cat comes up with for your blog. Coolness. I'll be watching!

Jenjur...the girl in my archives would die for those platforms....yum

They're here at Zappos - the only reason I haven't ordered mine yet is because I can't decide on silver or black. Think I'll get black and then order the silver if they are as yummy in person as in photos. http://www.zappos.com/n/p/dp/7023103/c/51363.html

I like your style too, Jerry - your avatar is adorable. Come back any time, kick off your shoes and pull up a beanbag.

You know what would be the BEST costume ever? That Bugaboo costume with your new platforms!!

hehe just kidding. The shoes are FAB FAB FAB! I'd say buy the black if you're feeling practical, or the silver if you're feeling flasy, or both if you can convince the husband that the charges on the credit card were for groceries.

For sho, rocky!!! I think I'm going to go sensible and get the black first, and then if they feel comfortable enough to wear often, THEN I'll get the silver. I'm SOOOOO excited!