So often we hear of activity that is borderline or simply outright illegal that is passed by a Grand Jury or that is not even prosecuted. In light of the fact that in recent memory the U.S. has had a sitting Secretary of State who was cavalier in her handling of the most sensitive of information, it seemed particularly chilling that a member of our armed forces would be prosecuted and imprisoned for an unwitting error. Indeed, the carte blanche enjoyed by HRC was unconscionable, considering how the life of Kristian Saucier and his family was upended, and all for a bumbling mistake. I am pleased that President Trump has pardoned Kris Saucier. Considering this is only the second pardon that Trump has issued, I heartily agree with how he is handling this privilege and responsibility.
Posted by phlegmfatale at 1:43 PM 1 comment:

I have a few plantings around a boulder in my yard, and I was thrilled recently to notice that my hummingbird mint is already coming back. I had to spend about an hour weeding and prepping the area this morning, and this plant's fragrance is one of my favorite plant smells of all time. The fragrance doesn't smell so much like mint as it does a wonderful herbal smell. I would place it somewhere between lavender and mint, if I needed to put it on an olfactory spectrum. However you classify the fragrance, it is very light and fresh, and the fact that it attracts pollinators is just a bonus.

I obtained this specimen from High Country Gardens, who has a wonderful array of colors of hummingbird mint. I'm thinking of ordering a few more so that I have that wonderful fragrance all over the yard.

(In my photo, the hummingbird mint is the one in the middle. Not the best photo in the world, but this will be large quite soon, and I'll post an update.) 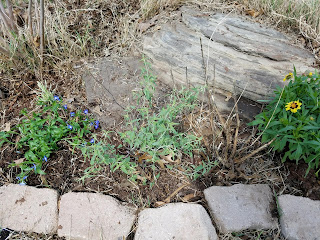 Posted by phlegmfatale at 12:21 PM No comments:

My Raspberry Delight Salvia is already blooming, and this has never happened so early. I've seen quite a few large butterflies, and I'm ready for the garden to put on more of a show this year. :) Can't wait for my first glimpse of a hummingbird this year. 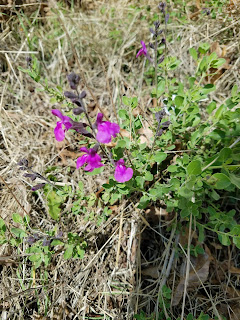 Posted by phlegmfatale at 10:26 AM No comments:

In September 2002, I needed a creative outlet, and felt the need to begin some kind of record of the tenor of the times and how they affected my life in general. Over the years, my blogging has been sporadic, and no period moreso than in the past year. This blog was not planned, nor was it necessarily composed with future intent to read my archives, but if I should wish to, there they will be, I reasoned. Some of the commentary here has been related to things that were happening culturally and politically around the world and in the U.S., but mostly this blog's content has been a mishmash, and perhaps not a measure of anything but the world as I see it. The traffic stats seem to indicate that some folks have hung in and still check my blog occasionally, and for that I am grateful and I thank you for your interest.

Undoubtedly, a critical eye cast back over these sixteen years of blogging would reveal that although I am essentially myself, I also have changed in some fundamental ways. I received my BA in May 2017, and I expect to complete my MA in 2019. I will post at length on my degree later on, but I feel the need to address the topic of the archives of my blog and their content and form. The archives of this blog are doubtless rife with errors of syntax and typography. I have been won over-- kicking and screaming-- to the camp of one space between sentences, but there must be many more egregious errors than that to be found within these myriad pixels. This disclaimer here is that if an error is in this blog, I made the error, and I'm not going to go back and edit the original work. They will stand as they are.

I stand by what I have written, as well, but I do not claim that I have never written things from an emotional or ignorant standpoint. Like all humans, I am flawed, and hopefully my flaws are primarily quirky and charming, but I will not apologize for being shot through with the frailties that are the calling card of our species.

In summary: old stuff I wrote is probably flawed structurally and thematically. I'm not fixing it. Hopefully, I will do better in the future. Just call me a late bloomer.
Posted by phlegmfatale at 10:50 AM 3 comments:

Friday was National Puppy Day, so I think you deserve a peek at my little houndies. I can't believe the two elders will be 10 this year, and my baby wiener girl is 6, though with her white face, she sort of looks the oldest. Still, I will do all in my power to keep them in fine fettle for as long as possible. 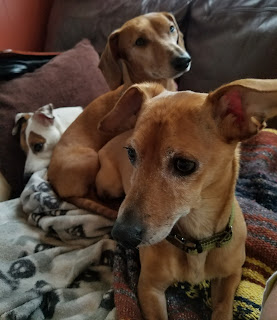 Posted by phlegmfatale at 9:11 PM 2 comments:

Kelly Grayson said this elsewhere on the web today, and I could not have said it more perfectly myself:


On kids protesting gun violence and demanding our leaders do something about it:
BRAVO.
Welcome to Citizenship 101, high schoolers. It is your birthright, and your DUTY to exercise your right to free speech and actively engage in influencing, and in a year or so, CHOOSING your political leaders.


Keep on doing what you’re doing. I’ll support you 100%.
But don’t expect me to actually buy your arguments, because you’re naive, ignorant of the subject, and have all the perspective of the world that you’d expect from a... high schooler.
And remember that, when the people who came before you felt it necessary to commit civil disobedience to make their points - and walking out of school, disrupting government proceedings and the conduct of business IS civil disobedience - they also suffered the consequences of that disobedience. They stoically (well, most of them) took their punishment, however unjust, and swayed public opinion with their courage. They eventually changed society.
You want to impress the people who think you’re entitled, pampered little snowflakes? Don’t ask for special snowflake treatment when you get into trouble.
And if you’re a parent, using your child as a sock puppet to advance your own political views? Shame on you for your cowardice.
Posted by phlegmfatale at 11:50 AM 3 comments:

The lesson from 9/11 that millennials have yet to learn: a call to resistance


P.S., For additional information on meeting lethal force in kind, I highly recommend The Cornered Cat for information.
Posted by phlegmfatale at 2:41 PM 7 comments:

I am delighted that I have to read some of my favorite literature for a class this semester, most notably Howards End by E.M. Forster. After so many hours spent reading stuff that feels like watching paint dry, it's a delight to read something enjoyable. Now I'm on to Sons And Lovers by D.H. Lawrence, which was tough sledding in the beginning, but which I am coming to love. Still, I will probably do my big semester essay on Howards End-- it is SUCH a good book, and one that I can't recommend highly enough. Lots of cheap copies may be found on ebay, by the way.


Speaking of bargains on books, since the professors in my graduate discipline are nice people, nearly all the books they require of us can be found used for a song on Amazon or ebay. This is a refreshing development after all the ridiculous books I've had to buy that were hundreds of dollars new, and often worthless almost as soon as the course was concluded-- could possibly be sold on ebay for $10. Meh.


Speaking of my favorite writers, Google informed me that today was the birthday of one of my favorites, Gabriel Garcia-Marquez. I loved his writing, and especially One Hundred Years Of Solitude. So good. :)


Spring Break is next week, and this is the 8th week of the semester. I can't believe this one is nearly halfway over, but considering how enjoyable this semester has been, it WOULD hurry by, wouldn't it?
Posted by phlegmfatale at 9:09 PM 1 comment:

The U.S. Postal Service has a gorgeous series of stamps called "Protect Pollinators" and I picked up a sheet of them last week, and intend to get a few more before they are gone. They are "forever" stamps that will be good for one first class letter in perpetuity, even when the price of mailing a letter changes. For those of us who are concerned about our pollinators (and that should be ALL of us, since pollinators germinate the food that we eat, or the food that our meat eats), it's a beautiful way to wear our hearts on our sleeves or on our envelopes. 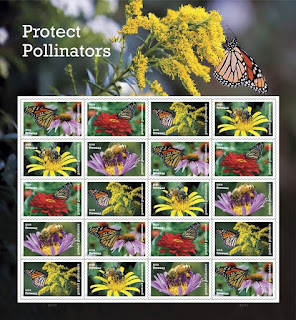 No credit to me, of course, but the wondrous beauty will come at the end in the form of a marvelous piece of music which I hope will delight you as it did me.


I've meant to post for ever so long, but life continues hectic in my Master's studies. This semester is a glory and a joy compared to last semester, but the work remains intensive. I am happy in my studies. Spring Break begins in about a week. Halleloo.


Yes, the banner and other images on my blog are being held hostage by Photobucket, who used to be so nice, but changed their policies so that a student like me can't afford to use them. I will try to get the images ginned back up in another form soon. In the meantime, pardon our construction.  Remember all those Geocities sites in the mid-90s with the "pardon our construction" place markers? Well, about 1/5th into the 21st century, that's about where I am with this thing. Will try to address that soon. Giant raspberries to Photobucket. UPDATE - Thanks to Himself for fixing the banner. More construction to follow, but at least we don't have the beastly photobucket shrieking all over the page now. :)


I am excited about my gardening for this year. My school schedule is such that I hope to have more time to get lots of healthy prep done, as well as plant quite a few more wonderful things in the garden. I don't use any harsh stuff on my yard, so in summer evenings, my yard is ablaze with fireflies, and I want to keep it that way. The fireflies here are not the big rascals of my childhood in Arkansas and the Ozarks. These are wee tiny little things, with much dimmer lights, but they are beautiful, and I have so many. My next door neighbors call me the firefly whisperer. I'll take it. :) A few more people wanted seeds to the Texas Star Hibiscus, and if you have not received them yet, I will be sending them to you tomorrow. Apologies for the wait, and I hope you will enjoy these wonderful things and have lots of happy blooms on them within a year or two. :) I still have enough to send out a few more, so let me know in the comments if you'd like some seeds.


So, for the wondrous beauty, I give you a glorious recording of Polorum Regina (Queen of Heaven) recorded by The Waverly Consort. There are several wonderful recordings of this setting of a 14th century text, but this recording is my favorite. The soloist has a glorious baritone that I could listen to all day. I hope this brightens your day. :)

Posted by phlegmfatale at 12:13 PM No comments: