Former Yugoslav tyrant Slobodan Milosevic was found dead in his cell today of natural causes, aged 64. Called the "Butcher of the Balkans" he was known for a campaign of bloodshed that precipitated the breakup of Yugoslavia. The international tribunal of the United Nations found him guilty of war crimes, and he has been imprisoned at the Hague and on trial there since 2002. He is the first sitting head of state to be tried by the UN tribunal.
But let's get to the core of the issue. Yugoslavia is a region that has been embroiled in bitter social turmoil for many hundreds of years. So what if, like Saddam Hussein, a naturally elected leader of a country wants to kill a few thousand or million of the nobodies under their auspices? Right? It's no one else's business, right? Like Saddam Hussein, Slobodan should have lived out his natural life running his own country as he saw fit, because who are we, the international community, to dictate what is moral for another country? Again, what are the deaths of thousands or millions of Serbs, Croats, Kurds, Shiites, Hutus or Tutsis? Right? Who cares? 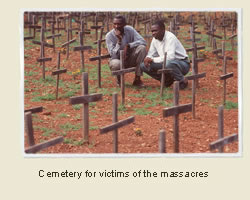 I care. I think genocide is an outrage whether the tyrannized people have skin color like mine or not. All my life I will feel chagrined at the failure of the civilized world to act and prevent the bloodbath in Rwanda, and I think we in the West deserve to be haunted by those images, if only to embolden us to stand up to tyranny and intervene on behalf of those who cannot defend themselves.
Posted by phlegmfatale at 9:29 AM

my only wish would be that he'd died a slow and antagonizing death...hopefully he did.

I would imagine that many people will show up for Sloblo's funeral. Just to make sure that he is dead.

The world was ripped off that Milosevic will not be held accountable.

And I fear that the same will be true of countries like Rwanda, and Iraq and others etc etc. It just doesn't seem to end.

I'm with you on this.

I also wonder when the US authorities are gonna bring harmony to places like 'South Side L.A.'
Surely such places deserve more peace keeping resources.

Maybe he's on a slow roaster rotisserie right now, with a bunch of litle hellions in red pajamas poking him with their gooey marshmallow covered pitchforks.
Thanks for stopping by my blog. Very cool design, by the way!

jerry - he died alone, and that's all we can say for sure.

fuzzbox - I'm sure you're right. And some will come to canonize him, too.

barbara - yeah, unfortunately, there is no shortage of evil beasts tyrannizing people in the world

tickersoid - the South LA thing is something that comes down to a cultural malady, though. Bringing that up just points out how difficult it is to solve any huge social malaise. Frankly,I think the human animal was not meant to exist in small regions in groups of millions. There's too much that falls between the cracks...

rocky(racquel) same thing - it's a complicated thing, society. Glad ya like the new look. I was excited to get it dolled up, at last, and Cat at Blog-Togs did an amazing job.

rocky - Same back at ya - thanks for stopping by - Yeah, I like your cartoonish image of him on slow-roast. If there's a hell below, surely he is there...