I admit I have a particular bias, but I do know objectively that this book is outstanding, and I highly recommend it. 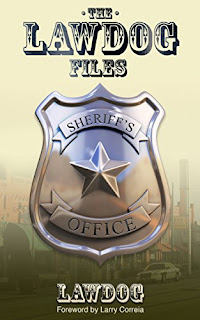 LawDog's writing is evocative of the cowboy philosopher/poet that so many of us associate with the spirit of rugged individualism that defines the American spirit. The fact that these stories actually happened only makes them even better. Rather than making him seem lessened, the tales of his rookie errors (never insult a feral hog with a mere 9mm) serve as bona fides for his hard-won gravitas. Speaking in a voice that does not condescend or preach, LawDog inspires confidence that hearkens to the very best qualities we hope for in law enforcement personnel. I know many folks follow his blog, and much of this material is available there, through the years, but it is good to have so many stories collected in one volume. I hope you will read it. :)
Posted by phlegmfatale at 4:00 AM 4 comments:


In case anyone hasn't noticed, Donald Trump is rather good at marketing. Image is something of which he has a keen understanding. To that end, he has effectively whipped his opponents into a perpetual froth for the past 8 months with his seemingly careless tweets on Twitter. However, his opponents don't seem to have figured out how soundly he has played their feigned sensibilities, these people who were upset about "grab her by the pussy" but felt Bill Clinton's Oval Office sexual exploits were "none of our business" and that his private life should remain thus -- talking out of both sides of their mouths.

After Trump played them like a Stradivarius over the Hamilton/Safe Space tweets, I thought they would finally figure it out and leave off having their chain yanked by tweets: not so.  The outrage will go on and on and on, because Trump haters are cats, and Trump's tweets are his laser pointer. They will never figure it out.

Kurt Schlicter brilliantly sums up the entire state of affairs while hitting some high marks of ribaldry in this post. Read it for a few good laughs, and take his message to heart, whatever your political leanings. This too, shall pass, and I suspect that when Trump's two terms in office are concluded, his tweets may eventually be regarded as the primary way he managed to keep his opponents off balance while he got down to actual business in his job as President.

Never in a million years would I have dreamt of Trump as a candidate, nor as President. But he is who we have, and I want the best for our country. I was no fan of Obama and I certainly wanted fewer of his policies to gain traction, but to wish him ill was to wish a harm on our nation. I wish more people on both sides of the aisle could have such clarity of thought when someone they don't like is elected to that office. Schlicter is right: never mind the tweets.
Posted by phlegmfatale at 10:51 AM 2 comments: