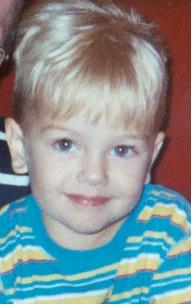 Several years ago, when sister was pregnant with this little man, she smelled a wretched, horrid burning smell. Having just moved into a century old recently renovated home, she was freaked out that the house was on fire. She called and was asking me about faulty wiring and the smell of a smoldering house. At last, she decided the situation was dire enough to merit calling the authorities, so she called 9-1-1. Down the street from the fire station came the big trucks, chock full of hunky, strapping firemen. She was standing on the porch big and pregnant (and barefoot, if I know my sister), wee niece hanging onto her apron strings. The fire chief pulled up in front of the big trucks in his suburban and started walking toward the house and said "OH, it's a skunk!" and turned around -laughing- to tell the other firemen before they dragged out their equipment. The skunk had crawled under the house and "uttered the inaudible discord of his race."(Thanks, Ambrose Bierce!) and everyone got a good laugh out of it, actually: she's quite pretty, and they were relieved not to fight a fire, and seeing as she was pregnant, they all just kind of gave her a pass on it.

So, the smell was not the city's problem. What to do about the odor? Well, what COULD be done? Nothing. Meaning well, and horrified that their progeny would be traipsing around town redolent of skunk, my folks and husband went over and rolled moth-balls under their house before sealing up the spot at which the skunk had been gaining access to the crawl space. Sister, moody, pregnant and just a mite tetchy at this point, was enraged at our folks. Naturally, they went over and removed the mothballs forthwith, and all of sister's rage was transferred from the skunk to the mothball brigade.

Well, I have to tell you, she and her wee bairns smelled a teeny bit skunky for a couple years. Their clothing had the faintest tang of skunk-action. It was weird. I got really used to it, but it was just part of the scenery, eventually, and always there.

If I called up mom today and brought up the subject, she'd probably get all pissed and start fuming about "those babies running around smelling like skunk."

If I called up sister today and brought up the subject, she'd swear she can still smell the mothballs.

It's like watching a tennis match, sometimes. I'm looking forward to the day when they both laugh about it.

I feel for your sis. I came home from Dizzyworld one year to find that one of the neighborhood dogs had tangled with a skunk. On my front porch. *ugh*

Hell of a story!

Oh boy, do I feel for your sister!

We were away on vacation when our dog got "skunked". Our housesitter let her in, and she rolled all over the carpets and up against the furniture.

We ultimately had to replace them.

I don't know why I remember this except Joan Didion wrote about it in an essay I read in Freshman Comp. Weird, the things we remember, right?

Darling boy, by the way!

I actually think I prefer the smell of skunk over mothballs. But that's just me.

*tee hee* you're so clever, Tam!
I guess the smell went away eventually- else your blog would be now "View from the Stinky Porch?"

dick - thanks - it's shocking but true!

attila - I'll bet you wanted to throttle that house-sitter -what were they thinking???

nongirlfriend - wow - no, I didn't know that about Ambrose. I don't know a whole lot about him, except I love his fables, his Devil's Dictionary, and adore the Owl Creek Bridge story - one of my favorites, ever. Joan Didion is interesting too. I'll have to find that essay. Yeah, it's weird what sticks with us. The boy is a little charmer-we're all in love with him and his big sister.

barbara - I know my sister will thank you for commiserating with her. I woke up this morning hoping she's not pissed at me for posting this. She and my mom don't let go of anger issues easily!

Ok Ree, I'm laughing but its raining out and I can smell mothballs. Love those firemen though, they roar down my street everyday and for a long time after that I could have been imagining it but I would swear they would have a silly grin when they passed my house.

*whew* Glad you liked it, sis! I know it was an awful experience, but it IS a great story. Pregnancy olfactory peculiarities, skunk foo, family conflicts: all the elements of the universal human struggle.

heh! Glad your sister can laugh about it now.....I'd have probably wanted to move!

Nothing worse than skunk!!!

I've heard of some emissions having a burnign sensation but that's a little too far ;)

CP: Hey, Phlegmy, have you ever smelled mothballs?

CP: Really? How'd you get their little legs apart???

Immature, party of one.

pissy - my sister would say moth balls are woister than skunk

ian - *snort* Yeah, but when it's your eyes burning, it's pretty bad

cp - I KNEW there was a moth bollocks joke in there somewhere, I just couldn't remember it - *snicker*

That was a great story!

I don't like the smell of skunk and can't imagine what mothballs smell like. But if it's worse then skunk - I don't want to smell them.

I have a weird sense of smell when it comes to mice. I can smell then. It's a very horrible smell that not many people (that I know) can detect.

the faint tang of skunk would not be preferable to the musty smell of mothballs! Your sister and her hormonal state wuz a crazy beotch!

I would have called Heloise for a hint about fixing the stank! Hopefully she would have had some wonderful idea about a bucket full of baking soda with a drop of vanilla in it or someting. She's a crafty one!

Poor wee ones stanky like skanky skunk! Did they have ANY friends during this time?

Quite the amazing story ... hope the smell is gone now. That doesn't sound like too much fun. Family is family, though. Right?

I guess it's a little difficult to splatter tomato sauce all over the inside of the house. That smell makes me nauseaus.