Gonna throw out a link with some important content:

If a high ranking pol from any political party but the DNC were videotaped laughing about the prevalence of their election fraud, do you think it would be all over the mainstream media?  It would be, but this story is not.  Further, the running-scared media are lying to their audience, saying things like it's "illegal to read wikileaks" that prove how they(major "news" companies) have acted to affect outcomes in politics, business, and and international relations.  CNN wants you to feel guilty about looking at information their anointed politicians casually tossed off from unsecure servers with no concern for security, national- or otherwise.

How is the average American to feel, other than betrayed by these news organizations who do not report without bias, just the facts.  They tap dance double-time to shield the facts in some cases, and to mis-frame issues, altogether.

No linkey love for Michael Moore, but various outlets are reporting that in his new film, he states that he hopes that Hillary Clinton DID have Vince Foster killed.  "That's bad ass," he is reported to have said.

Think of how horrible a person it takes to kill another person who knows too much about their shady business dealings.  Think of the scale of vileness their dealings have to have reached to necessitate the murder of people who know what they are all about: how can anyone want a person of that character for the leader of our nation?  Even joking about that telegraphs a dark cynicism about values and ideals on which our nation was founded.    Not funny.  I'm not laughing.

Holding our noses as we go.

2016 has been rough in many ways, and the current presidential election rotation is prime among the unpleasantries this year has afforded.  Trying to decide which reprobate to reward with the U.S. Executive Branch is like trying to pick up a turd by the clean end.

If I were a campaign strategist for a presidential candidate, I'd select the four or five worst bits of little-known dirt I could find on the opponent.  I would study the first debate meticulously, analyzing the opponent's performance from every angle.  Then, about a month before election and a couple of days prior to the second debate, I'd release one of the bits of dirt, preferably salacious detail that did not include real data related to policy-- one wouldn't want to bog down on details related to actual job performance.  This bit of dirt would need to push the buttons I've already had in overdrive for the entire campaign.  A well-primed public then would erupt with rancor over sexism or racism or whatever detail on which the dirt centered.

Thus unbalanced by the undeniable embarrassment of the situation, the opposing candidate would face my candidate in the debate at a distinct disadvantage.  My candidate would enter the second debate well-poised to deliver a death of a thousand cuts with verbal barbs engineered to prod at tender fresh wounds.  The opponent may recover, but the seed of doubt has been planted in many of his supporters.  I would then use the coming weeks to deploy the remaining bits of dirt, releasing them to throw the opponent off-balance every time they seem to be regaining their equilibrium.  I would time the most devastating bit of dirt to release the Friday before the election, when it would be hardest to recover, and when the voting public will have the entire weekend to seethe and marinate over the new outrage.

If you are a Trump supporter, you really should brace yourself for much worse to come in the next month.  This is not over by a long shot, but I also think the release of the secret taping of Donald Trump may have been a strategic mis-fire on the part of the Clinton campaign:  they have unleashed a can of worms wherein secret recordings will be taken as gospel, and what do you think are the odds of either Clinton having been secretly recorded saying outrageous things?  (Funny note: I just typed in "bill clinton" on Google, and the first search term auto-filled "bill clinton cigar."  I wonder what that's about???)  Particularly  given Bill's friendship with the problematic Jeffrey Epstein. *shudder*

More to come, folks.  It's all ugly, all the time, in this campaign.  I expect both sides to play dirty, and to come out swinging.  And the sad thing is the net effect is that we will have difficulty respecting whoever wins the contest, because the whole problem was that we were already sick of politics as usual, and the policies they beget.

The morning ritual is the first thing out of bed, the pups go to the backyard for the necessaries, and then back into the house for Kibble Time™.  This is the time of year when pecans are falling en masse in the back yard, and Mochi loves to supplement her diet with pecans.  The usual routine is the pups run out, do their business, Mochi has a quick pre-breakfast nut snack, and then back in for the morning meal.  Mochi often enters the house carrying a pecan she hopes she'll be able to secret in the house somewhere with Mommy unawares, but when the Sacred Kibble is in the offing, she's pretty good about giving up the pecan in her mouth to me, which I quickly dispose of properly.  I let the pups out back this morning, and at most, they were in the yard for two minutes.  When they came in, I saw Mochi throw back her head to get a better purchase on the nut she was carrying.  ONce in the house, I told her to spit it out, and I was surprised when she did so quite easily.  Without focusing on the nut,  I reached down to pick it up, surprised to find it quite warm.  Um.  And moist.  And furry.

In my hand I was holding most of the head and neck area of a small rodent.  The eyes looked peacefully closed, as if in sleep.  There was red meat aplenty, and I could see the heart and other viscera, but most of him was gone.  The black whiskers were so short and tidy.  He was a lovely little marvel of a creature.  Poor little devil.

Somewhere, little rats sit at the kid's table at clan gatherings, and they whisper tales of the three giant, slavering beasts who come out randomly to strike terror and fear in the hearts of hapless rodents, killing all they see and eating their corpses as they scan the horizon for movement.  Woe betide the little rat who strays too close to the nomnivorous fanged beasts who rove my yard.

The morning is bright, and full of terrors.

This has me re-thinking puppy kisses.  Yuck.
Posted by phlegmfatale at 9:02 AM 1 comment:

Sunday, Puppy Sunday: it's laundry, and I helped! 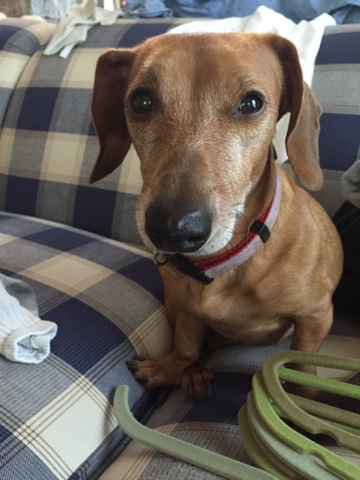 Mochi is a good and supportive helper around the house.  Whatever is going on, she wants to get her paws into it!
Posted by phlegmfatale at 9:57 PM 2 comments:

My penultimate (hopefully) undergrad semester started at the end of August, and I'm now about a third of the way through.  I managed to swing a class schedule of MWF this semester, so I have two full days for study and other things.  It's a relief to not have to be on campus at 8:00 AM every day.  Thursdays I still spend most of the day on campus, but Tuesday is free for working at home and studying there, plus the prospect of sleeping in a wee bit.  Unfortunately, I tend to wake up pretty early on the days I don't have to, it seems.

I participated in a large short fiction writing competition this summer, and two weeks ago I found I'd placed well in my group.  The second heat has happened, and I should get feedback on my second story in about a month. I hope to place again, and to advance to the third heat.  It's good to get feedback that helps tighten up my writing.

I've been tutoring students with their writing, and I've been pleasantly surprised how that process has helped me to view my own writing critically and objectively.  I also enjoy that process, although thus far it has been a single-serving interaction: students make their corrections and submit their paper, and they don't often come back to share the outcomes for their work.  I find myself wondering at knowing only half of a story.  I felt that way about the patients in nursing school clinicals, too: you do your shift, and do all you can for a patient in a 13 hour period, and you will most likely never see them again.  It's an odd interaction that is intensely personal and then is suddenly no more.

The puppies are well and in fine fettle.  They seem happier with my new and improved schedule, as I am home with them more often.  They are convinced a demon is living under the lawn mower, and they circle and menace it tirelessly.  I tip the mower so they can look and sniff under it. "See? No demon.  No varmint.  Just grass whiskers."  They are not buying it.  They are a perpetual delight.

I am considering my next step after I graduate in May.  I am stepping up the writing, and am currently researching information on East Texas for a work of fiction I began last year.  I wrote a few short stories with a character I placed there, but now I want to do a full-length fiction for her, and I am reading as much as possible on the area.  I've picked up "Tales from the Big Thicket" and a few other books.  I appreciate any books or websites you folks might recommend on East Texas history and lore.  My character lives near a made-up town, but it's in the region south of Tyler.

I'll try not to let so many weeks elapse between posts, next time, but life continues apace.  I confess that this election year has been vexing, and I will not be sorry to see the back of it.  We've got -- what? -- five weeks to go until election?   Someone accurately said that trying to decide for whom to vote this time is like trying to pick up a turd by the clean end.  Quite.

I'll try to get a Puppy Sunday post up.  Y'all is owed one.  I hope you all are well and thriving and happy.
Posted by phlegmfatale at 9:41 AM 2 comments: