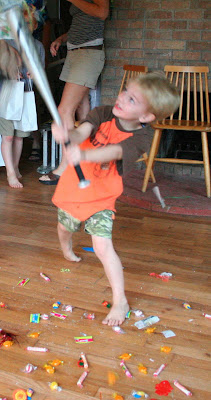 The boy had a grand time, and no rain cloud would spoil his day. Two of the menfolk held a bar in the air from which the pinata was suspended in the living room, as it was too wet and rainy to do the pinata outside. This actually was much better, because no one got dirt or grass in their goody bags. The pinata was way more stable than I'd hoped, and each kid got three turns of three hits, and every single kid managed to knock some candy out. I'd be surprised if any of the 6 kids had less than 2 pounds of candy and toys at the end of the scramble. They really whacked the crap out of that thing, too. The birthday boy knocked off the gun on the very first hit.
I learned a painful lesson last time I made a pinata. I used the free local paper (D. Observer) for the project, not thinking about the fact that although the exterior was completely painted and the text obscured, the explicit strip club ads and escort service ads were plastered all over the inside of the partially disgorged pinata. Cringing as I watched the kids tear into that one, I made a serious note to self to exercise more caution in future about which papers to use.
I gave him a cap rifle with about 1200 rounds of caps. I think he shot about 100 before the party was over. He was thrilled with his little Leatherman knife, and thanked me again before I left. Not bad manners for a 5 year old. He had quite a haul, between all the doting relatives. It was a grand day, and now I'm exhausted.
I hope your week is half as great as my Sunday was.
Cheers, m'dears!
Posted by phlegmfatale at 12:58 AM

Kids don't have Pinata's over here. They have to beat up old ladies with a stick until they give up their old age pension book. Then off to buy sweets. (candy to you)

Phlegmmy --
That was just an outstanding effort overall. The tank idea in the first place, and the Osama figure was just inspired! And so well executed.

Now I'm awaiting those who would decry your warping the poor kid's mind: The concept of a pinata - - Why, that will undoubtedly foster a "Violence begets Rewards" attitude. And configured as an AFV (Armoured FIGHTING Vehicle) - - So warlike! And hanging an effigy of a world figure, to ridicule those different from "us/U.S.." Tsk tsk.

And, oh YES - - Gifting one so young and impressionable with a toy RIFLE! With abundant ammo! Aren't we taught that this leads the lil' chern into EEEVILL ways?

;-) My Mom had eight siblings, which gave me a pretty abundant crop of aunts. Some were pretty neat women, but none were as cool as you.

Very cool!!
I hope those delighful menfolk didn't hurt themselves having to hoist such a well- built vessel!!So glad everthing went so well for all involved partiers !!Looks like you've set the bar for birthday parties from now on!

What a super job. I loved the Osama head! What fun! I'm in awe!

tickers - wow, that's some custom. You should try the kinder, gentler approach of beating an inanimate object until it yields its stuffing of candy, instead of beating up old ladies1

jpg - Thank you ever so - I'm greatly complimented you said it turned out so well. Yeah, I've been wondering where the critics were - I've sorta expected to take some guff over this - I mean, people don't need much of an excuse, it seems. I also gave him lighting and action-sound sword, scimatar and hook-hand (pirate kit) and lots of airplane/helicopter kits. And people can say what they will - if someone hadn't already invented guns, I'm convinced this boy would have on his own, eventually. Nothing wrong with boys being boys, in my opinion.
Aw, shucks, I'll bet your aunties totally rocked and adored you, too. My universe just hums to the frequency of the oddball project. :)

schnoob - Yup, it turned out well.
The guys said that as the kids emptied the pinata, it got a lot easier to hold aloft.
Let's put it this way, I'm going to start very soon on the pinata for niece's January birthday - that way it doesn't turn into this last-minute rush again.

lainy - it was a blast, and everyone really got a kick out of it. So, when do I need to make that naked man pinata for your birthday? *L*

The boy looks like he's having a great time. But with 2 guys holding a bar for the pinata to hang off of the kids should have been blindfolded. Probably would have gotten a perfect America's Funniest Video shot for sure.

My cousins, my nephews, my sons and I all grew up with cap guns, BB guns, shot guns, rifles, pistols and knives around the house and in our pockets. None of us turned into crazed bloodthirsty killers. And we watched war movies and horror movies and "violent" westerns. I guess Lash LaRue roping a bad guy and pulling him off his horse so his head bounces off the ground is violence. Today anyway. We thought it was funny. Anyway, my point is that I don't believe toy guns make killers out of kids anymore than forks and spoons made Rosie so fuckin' fat.

Those two guys are brave dudes...being that close to kids with bats! I would have stood cross-legged if it were me!

He's got a great swing!
Glad you all had so much fun, and it's always worth it to put smiles on kids' faces!
My daughter gets a smile on her face thinking about Zac Efron, and getting a Wii eventually...

thanks sis, it was great fun. We usually blindfold, but I didn't mention it cause all the bat swingin in my livingroom seemed risky enough without blindfolds, I'm not so good with patching drywall. A

Doncha love it when it works out in the end?

You've caught him in mid swing. And it looks like he totally owned that pinata!

Love it. What bliss.

Wow, what an aunt! I was largely ignored until I was 21 - what a lucky little kid for someone to go to that kind of give a damn.
That Osama effigy kicked absolute butt, too!

What a blast a naked male pinata would be. You have plenty of time, June 9th. LOL