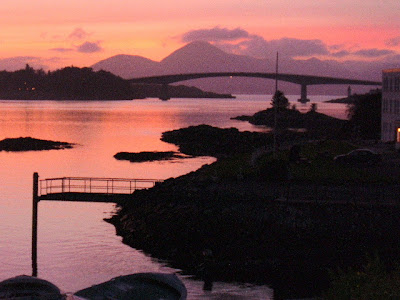 Poking around net, I learned that the ferry no longer runs between Kyle of Lochalsh and the Isle of Skye in Scotland. I know there is a convenience factor with the timing of ferries and all, but for some reason, this sorta bummed me out. That's not to say that someone on the other side of the planet should do their road/bridge/community planning based on the whims of an anonymous person over here. It's just that there's something poetic about ferries, and I suppose there's an appeal to the isolation of living on an island which may only be reached by boat. It's harder for the zombies to get there, for one thing. 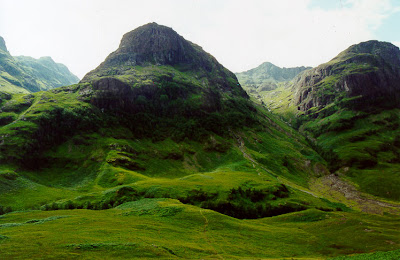 The second picture is Glencoe in the North of Scotland. So pretty I had to include it. Someday I'm going back there with a fabulous camera and a passel of massive memory cards.
Posted by phlegmfatale at 10:14 AM

Purdy. Closest I ever got was standing on Hadrian's Wall.

The bridge went up in '95 and kick started a long protest about the tolls the builders were charging.

Lasted for 9 years until the Scottish Executive bought it back from the private company and it is now free.

I am with you on the zombies.

fhb - you should go back and explore Scotland with D. Words and photos can't convey how beautiful it is. Heart-achingly so.

dba dude - I suppose the protest about tolls is a universal thing. Good for the SE for liberating the bridge.

Wow, how beautiful! Reminds me of the mountains of N.M. and fond memories.

Beautiful. I'd love to go to the Isle of Skye. Even the name sounds beautiful to me.

Gorgeous pics! Hubby and I have been planning a trip to Scotland. I can't wait!

"It's harder for the zombies to get there, for one thing." You say that like it's a good thing or something!

Completely amazing photos though. I think the combination of the accents and the scenery would kill me.

If I could, I'd become an ex-Pat and move to Scotland. I'll see it one day, I will, I will!

"Zombies." How did you know what they call American tourists? ;-)
I'm ready to head to Scotland again. But only in the warmer months. Did you point these out to Holly?

Kevin - any place with "Otter crossing" signs on the roadways is ok by me! It's indescribably beautiful.

attila - we'll want a full report from you. You're in for a phenomenal treat!

barbara - I know it kills me *sigh* Well, in your case, I'd be willing to make a zombie-exception.

g bro *L* You smartass! I prefer travel in the winter time, even to a place that can be brutally cold and windy. I love it.

jrshirley - Yeah, isn't it just the most lush, healthy-looking thing you've ever seen? I adore it.

lbb - Even more beautiful than photos can convey

My grandparents are from Scotland, and it's been too many years since I've been back to visit, other than a quick layover on a corporate airplane flight. Thanks for sharing the beautiful photos.