I met a couple foodies for 1/2 price Bento box night at Sushi Yama at 8989 Forest Lane in Dallas, Wednesday.

I arrived early and backed my car into a shady spot and read for about 45 minutes waiting for 6pm to arrive. Next door to Sushi Yama is an English pub, and on the other side is an Irish pub. I've wonder if there's ever been a brawl in the parking lot. Prolly not. Prolly no one Irish OR English goes either place.

I sat and focused on my (very good) book, generally, but people were pulling up and occasionally distracting me. They got out of their vehicles and walked to the door of one or the other bars with such resolution, I found myself wondering if any of those folks had applied themselves at any point in the day with so much purpose as that with which they hauled their carcasses into the bar. I sort of associate social drinking with leisure and ease, rather than a desperate need to slake a thirst, so it seemed strange to see people walking toward the bar with the same vigor they'd have if they were walking into a court case they knew they were going to win.

One woman climbed out of her truck and tucked her ugly handbag into her armpit, adjusted her tube top and sashayed her ass right on in, trailing the naff of desperation that is the earmark of the apocalyptic white trash divorcee. Her hair looked amazing.

Jeans didn't fit right. She wasn't any of that, not even the bag of chips. I just wondered what she expected to accomplish, poor thing. I wanted to rassel her to the ground and give her a mini makeover right there, but she had about a foot on me and obviously needed a drink, so she might not have been a willing subject.

The bento box was amazing. It's an array of sushi/tempura/teriyaki-type stuff, and is normally about $22, but Wednesdays it's $11. Coolne 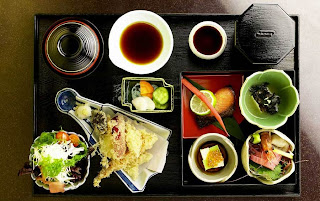 ss. I haven't been there in about 4 or 5 years, so it was nice to go back. In a bento box, you get small portions of a lot of different things. True, some of the things you'll get are stuff you'd never order, but also, sometimes you discover you like something you never would have tried without prompting.

The restaurant was full and most tables were all getting the bento boxes. This is the kind of place I imagine is very much like a restaurant in Japan. It's small, the tables are relatively small and people are sorta crammed together and you all just kind of work around it.

Spilling back into the night a little after 8pm, toob top mama was having an animated verbal exchange with another bar-goer involving lots of non-Sunday-school language. I guess she got her drink on, alright.

I'll bet if I go back to Sushi Yama in 20 years for a Bento box and wait in the parking lot between 5 & 6, I'll see that same woman in that same get-up.
Posted by phlegmfatale at 1:31 AM

I bet tube top mama will still be there in 20 years looking like she does now.

Pretty picture. But if it's raw, it stays in the creek.

You'd need dozens of chain-smokers to make it an authentic Japanese experience. Dr. Pig said he'd never seen so much smoke in his life.

You know she will!!!Sounds like the typical crowd anywhere near a bar in my town.Except they cant differentiate between English or Irish. FORGET about Japanese cuisine. Bento what? I'm gettin me some eggrolls from the Krogers..and a case of coors light!!!

... Only with a few more tattoos. And yea, if it isn't boiled or fried, it's garnish. Just can't.

Nothing beats a bento box.

So YOU'RE the one who eats that stuff! (No, actually, I'm the only one who doesn't, 'ceptin' Myron).

That bento box looks fabulous! All my favourite things look to be represented there.

It looks fab, but some of the items are (to me) of the "close-your-eyes-and-eat-it" variety!

Tube-top (hah, just spelled it "toob" like "boob", I'm sucha dork!) mama sounds like so so many of the women I see here in Vegas, especially gambling and/or drinking when I come in Saturday mornings to work.

You just know they haven't been to bed yet and are soooo strung out.

lainy - I'd bet with you on that score!

liz - yeah, I've heard that, too, but Dallas outlawed smoking in restaurants, innit? I wouldn't choose to curtail the right to choose for restaurant owners, but I confess I don't mind not smelling like smoke when I leave a venue.

schnoobie - well, one would hate to go overboard on authenticity!

barbara - I'm crazy about tempura with that sauce - yum!

christina - I understand. The first time I munched into the fried skull of a fairly small fish, there was a real grin-and-bear it moment. Then I discovered it tasted like a fishy potato chip, and I was so totally on board, eyeballs and all!
Yeah, she looked rather Vegas, to me. Funny thing is you see the Vegas patrons looking young and together-ish on commercials, but I always imagine a seedy undertow to the typical population at a casino. I guess I have too many trashy relatives who are into casinos to think otherwise.

Well, let's just say I don't work at the ritziest hotel/casino on the Strip!

If you head to the Paris or Bellagio, or the Palms off-strip, you'll see plenty of younguns partying it up!