Amazingly, I've lived within a few miles of a Cowboy Chicken location for a few years, but never investigated their food until this week. It was fantastic, actually, and if you live in Dallas, you really should check it out. 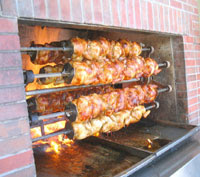 I've driven past it about a million times, but this week was the first time to go near the front of the store, which is where they have their rotisserie on full display, great spits of roasting chickens spinning like pretty maids in a row in what may be the ultimate white trash cheap thrill. Yes, I stood for minutes watching them spin round, the wood fire blazing at the back of the oven.

Anyhoo, I was thinking of that this morning, and of how chicken is such a staple of the American diet, and it started me really wondering about chickens. Here in the USA, we generally don't eat the rooster and I'm given to wonder what really happens to the male of that species. Surely, life is sweet for a stud rooster who excels the adage from of 2 girls for every boy.

Of course, everyone has heard of the classic of French cuisine "Coq au Vin" which naturally is an alcoholic old rooster who perhaps is no longer a favorite with the ladies, a newer, more spry male specimen having joined the fowl yard. Apparently, the excess of connective tissue in an older rooster makes for a much richer broth. Who knew?

Another common method of dispatching male yardbirds is their caponization. A capon is a mature male chicken which was castrated at an early age, and the adults of which become very non-agressive and terrific baby-sitters for the baby chicks. (How to caponize a rooster) They also have a higher fat content and are very meaty, and many people prefer this bird to the hen. They also can substitute for the soprano in vocal ensembles. I've seen capon on the menu in Europe, and I've eaten it in dishes in a Belgian farmhouse, and it was superb. Apparently, the castration of chickens is banned in Britain, but for all its Greenpeace and PETA pretenses, I think no such ban exists anywhere in Europe.

So what of American male chickens? What exactly is the ratio of male/female chicks, and are they sexed in the eggs and the excess of males turned into omelettes? Are they the silent victims of the poultry industry? Now that the feds and public are more and more apt to cry fowl over cockfighting, what purpose is left to the average American rooster? Does he wind up in McNuggets?

I'm not losing sleep over it, but I am curious.

Being a resourceful kind of chick myself, I've searched for info, and apparently, along with defectives and slow-hatching females, many male chicks are destroyed upon hatching to make way for more marketable birds. Some males along with females are slaughtered at 45 days as young broilers. Pity, as capon is delicious and is a treat of which the American public seems largely oblivious. You don't know what you're missing.

I'll not abuse your intelligence by providing links to the places I obtainded the above information because I'll never be caught recommending tofurkey or any other virtual meat abominations that other folk content themselves with. I can respect that someone makes another choice than me, but I sure don't like being preached at about anything.

Besides, if we weren't meant to eat animals, they wouldn't be made out of meat.
Posted by phlegmfatale at 9:42 AM

Besides, if we weren't meant to eat animals, they wouldn't be made out of meat.

I actually had to go to cadaver lab at UNLV as part of my anatomy classes in Massage School.
The students reacted mainly in two different ways.
Either they resolved to become vegetarians on the spot, or they shrugged their shoulders and realized we're just meat, too.
I'll give you three guesses as to which category I fell in...and the first two don't count!

I read a lot of historical fiction (romance!), and roasted capon appears on the page quite frequently. I always wondered what it tasted like.
What about in medieval times, didn't they eat songbirds and peacocks and the like? Swans, too, right?
Weird.

I've got to agree with Christina. Strange but true

Howz that restaurant slogan go? Something like "... room for all God's creatures ... right next to the mashed potatoes and gravy." Capons, people ... guess we're all white meat to something along the food chain. I've occasionally thought about that while out walking and seeing those BIG mountain lion tracks.

Well you certainly got me thinking there - I remember having a capon dish in Brussels and I would have to say that it was delicious.

Which I find weird - we eat castrated beef and lamb - so what is it about male chickens?

Probably easier to find in the US where a company in Iowa still markets them. Check out Wapsie Produce - mmm tasty!

Chicken is for fryin'. Brisket and ribs is for smokin'. That's how God intended it.

And we all has the same parts

The Girls and Buffington thank you for the mention of their species as a whole.
Buffington has been practicing his
song and has been hitting some high notes lately. I do believe he needs a new timepiece however!
He is one rooster that wouldn't need to be caponized, as he is pretty tame already (possibly gay?)
They all enjoyed some nice watermelon from the garden yesterday and despite your poultry consuming tendencies, wanted to wish you well on your future knitting endeavors.(noro ROCKS forevah!)

I thought McNuggets were the rooster parts!

You mean to tell me that the British have outlawed rooster castration? Have mercy. What about cattle? After all, steers provide the majority of the beef we eat.

Fascinating stuff! I actually learned something today and I hate it when that happens.

I'm all for meat, but really would feel much better about it if it were produced more sensibly. Why not eat the rooster indeed?

I was reading my archives, just for the hell of it, and I discovered a post you commented on a few weeks after I posted it. I guess I missed it at that time.
It had to do with how I should look at my failed marriage, and it really opened my eyes.
I guess better late than never!
Thanks so much, Phlegm.
You really gave me a boost!

christina - indeed, in medieval times, I do believe songbird tongues were a great delicacy. Ew. I'd rather have them around to listen to than to taste for but a moment. But I suppose that was luxury. Morons.

Yes! They ate swans. In fact, the highest tenor solo (that I know of) in the classical repertoire is Orff's setting of the text about a roasting swan in Carmina Burana. These were ancient texts, some extremely lewd, and this one was the words of the swan as he turns on the spit. Violent, those old-timers, eh?

lin - Eep, I'll bet I'd make a tasty, slow-moving target for those mountain lions. I'd hope I had an equalizer along for the walk!

dba dude - I can't imagine what difference it makes. Based solely on my own experience, I think one would have a much steadier, calmer life if not buffetted about on the seas of hormonal fluctuation. 'specially for a creature robbed of volition by the fates that placed it there

myron - what a pack of tasteless dullards that vegan lot are!

schnoobaroonie - please make me happy and tell me Buffington is a Buff Orpington? I want one of those just so's I can say I have one. Chickens are so awesome - I'd like a whole mess of 'em! Tell him I'm no threat to him, even with my chicken-eating ways.

mushy - whatever it is, it ain't good!

christina - Very cool! :) Glad to know it! You should be boosted - you're a cool and groovy chick!

I LOVE the Carmina Burana!

I saw it performed in Berlin when I was a teenager, and if I had stayed with the Las Vegas Mastersingers, I'd have been able to perform it last year, I believe.

It was always my dream to sing in this, but I lost out.

Oh, well. I'm not dead yet, so maybe the chance will come again.

christina - it's an exciting piece to hear, and even more exciting to perform. Maybe when you come to Dallas to live we can perform in the Dallas Symphony chorus together, or some such.