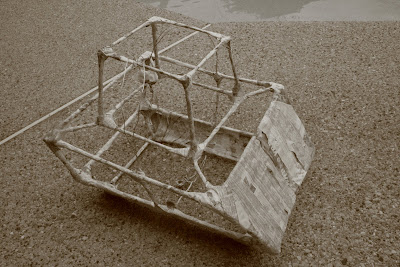 Famed Italian tenor Luciano Pavarotti died yesterday after a struggle with pancreatic cancer. He was a larger-than-life remnant of an age in which the opera singer was the most celebrated of entertainers, a combination of rock star and royalty, and a symbol of great national pride and culture. He was a performer of great artistic technique with a specatcularly riveting voice and powerful stage presence.

I had a voice teacher who performed in a production in Austria with the Pav some 25-ish years ago, and I have a tasty bit of gossip I learned then, but I'll save that for another day.

Tenor is the most difficult voice to produce in the classical vocal style, and Pavarotti was a master. See the video below, and really only the first minute is enough. Here he sings the duet from Verdi's ultra-tragic La Forza Del Destino. This opera is a pretty big downer, but whose motif is one of the loveliest in the entire classical canon, in my humble opinion. (This motif was also used to great effect in the French films Jean de Florette and Manon de la Source.)

Pavarotti was a temperamental performer, and while he tested the patience of many others with his demands, he was not so forgiving of people he perceived to be wasting his time. About 10 years ago I read that he'd stormed off stage during a dress rehearsal yelling "Turds!" at the other cast and musicians. That's pretty bold. In an age where few people say what they really mean, I have to admire that on some level.

Anyway, notice Pav is wearing specs and reading from printed music, and it would be natural to think "well, he's sorta phoning it in," but notice what tremendous ease he has with the high tessitura - the way the upper notes seem to float up out of him with no great physical struggle - this is how tenor singing should be done. He was a natural, and regarded as a demigod in his native Italy. With no sacrifice of pearl-like exquisiteness, Pav had the kind of tone that cut right through an orchestra like a giant steelie tearing its way through a field of lowly clay marbles. Loved him for always having the hankie, too.

Judging by Russian Baritone Dmitri Hvorostovsky's hair color, I'd say this was about 15 years ago and Pav would have been in his early 60s and his voice might understandably have been in decline. Yet, I hear no effects of aging here. An extraordinary instrument, a brilliant career, and a fascinating reminder of how the sublime and profane can coexist in one person. Bless him.
Posted by phlegmfatale at 2:08 AM

He was a vocal acrobat.

And Dmitri's dramatic singing, in comparison to Luciano's casual "hey, check this out" is kind of weird to watch. Good voice, though.

It probably won't hold much - unless of course you finish it!

I know nothing of opera but have to say he had a good innings for some one who clearly enjoyed a good pie.

I was sad to hear of his passing. But I was glad to be alive at the same time as he to hear that voice. I never saw him in person, but his gift is immortal on recordings. Most of the gifted folk I have witnessed are/were sports types: Sandy Kofax, Wayne Gretzky, Roberto Clemente, et.al.

I worked as a techie for Canada's only commercial Classical radio station (Classical 96 Toronto)in the mid eigthties to early nineties. We played a lot of Pavarotti. When I was running the board, the monitors were at full-blast.

About the Baritone Dmitri H.: The female stars, voices, D.J.s all verily SWOONED over big D when he first appeared on the scene. Also he has a CD of Stephen Foster tunes and does a duet with Garrison Keillor.

Anyway, I enjoyed your tribute.

And yep, he was a trip, and a hell of a singer, fer sure. I remember when that Three Tennors thing came out, and you could so clearly hear how much better he was compared to the others. Love Domingo too, but that Spanish dude (Carreras?)had too much Corinthian twang in his vouce. Too much with the "TH".

Wonder who'll rise up to replace him?

And I don't care what the critics said--I loved the movie he made--"Yes, Georgio."

Well now.. that tanks gonna be right purty all finished up and full O fun kid stuff!!!!I've never heard of a "multi chamber" pinata ...but then I was lucky to get something that was gift wrapped on my birFday.You're the waay coolest Auntie EVER!!!!I loved the Pav tribute and the Turds!story....I used to know how to say"The stench of your ignorance poisons the air" in Italian no less...it was very important to me to be able to say that...once upon a time.....

squeaky wheel - yeah, Luciano is all old-pro and Dmitry is the eager young pup. Nothing wrong with either. Dmitry had a lot of pressure just at that moment, singing with one of the all-time greats.

mushy - you smarty-britches! Yeah, it'll hold water when I'm done with it!

tickers - maybe being able to enjoy life adds to the longevity, oui?

BRB - glad you enjoyed it. Yeah, Dmitri really has the ability to cause a stir, and especially now with that magnificent silver mane. He's also a marvelous singer. I prefer a bass or baritone, anyhow. THomas Quasthoff is my personal favorite. That must have been great, though, working in a classical station. Thanks for stopping by!

fhb - your comment thrills me, because a Panzer fünf was precisely what I was looking at as a guide. WOOHOO! As work has progressed, I have slipped into thinking, uh, I'll just be happy if it looks passably like a tank!

Difficult to say who ever could replace him - he was a once-a-century type talent. His voice was magnificent and he had riveting presence to go along with it - a diabolical combination.

dutchess of malfi - eh, what do the critics know, anyway? Never let people like that kill your joy!

schnoobie - Aw, shucks! Well, I like them to have to beat the snot out of it - it's no fun if it all spills out with the first "whack!" I try to do fun things for them, because I have the coolest niece and nephew ever!
Glad you liked that, and I thought the turds story was a nice touch. I love that your existence depended on being able to say that in Italian, even if you did move on with your life. You say things like that and I feel like we must be related!

I was thinking about you when I heard the news. I think when I started to hear listen to him in the mid 70's, his voice was somewhere between the best and the start of the slow decline, from what I read elsewhere. I remember an interview with Mike Wallace, though, way back. Anyhoo, it seems he lasted a good long time considering the food, the drinks and the merriment one suspects he had. Well lived!

On another note, I'm an totally, comprehensively and entirely red-faced that I had been such an occasional visitor of your esteemed blog that I had no idea you were sick in August. Totally.

No italics, bold or capital letters can express my shame, Rita. Not even if I can enter comments in colors. Nevertheless, I'M SO SORRY AND I HOPE YOU'RE MUCH BETTER, DEAR, DEAR RITA.