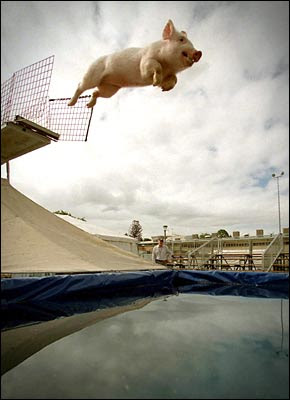 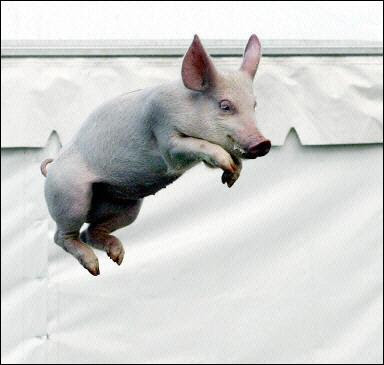 I think my dad was wishing Bollinger would axe the foreign dignitary if he ever went swimming and got hog nasty in his ears.

I know a guy who worked in a diving pig show while he was in college in Austin, probably about 25 years ago, or so. Now he runs a restaurant in London, so it just goes to show that even if you must endure a crap job occasionally, you never know where you'll end up. Not that swimming with pigs is a crap job. Unless you get hog nasty in your ears.

Where have all the diving pig shows gone?
Long time passing.

You've got to wonder about anyone who doesn't eat pork. Seriously.

I found a really cool website on which to squander precious time daydreaming about one fine day when I'll have pet chickens. It's fabulous, and called mypetchicken.com and they have lots of info on the noble chicken as pet, etc. I was looking at the bantam Belgian breeds and the Buff Orpingtons which I love just for having a name like Buff Orpington, and of course there's the temptation of having the Foghorn Leghorn variety.

Anyway, I was daydreaming, blissed out on the prospect of chicken ownership when I had this wretched realization: um, chickens like to get up in the morning.

You have to coop them up at night so varmints won't gobble them up, and then in the morning, they expect to be let out of the coop to scratch around in the yard. Did you know chickens eat fleas? Ees true. They also eat grubworms and beetles and lots of other garden pests. Maybe I could find someone to share a chicken with? Someone who'd let me have the chicken for a half hour every day. Could I rent a pet chicken? Must investigate...
Posted by phlegmfatale at 12:47 AM

Let us know if you find someone to share a chicken with. LOL

lainy - you'll be the first to get my full report, should I find a part-time pet chicken. ...yeah, those pigs are incredibly cute, but I'm with you: their taste good/cuteness ratio skews in the taste good direction. What's cuter than bacon? I can't think of it...

"You've got to wonder about anyone who doesn't eat pork. Seriously."

You just penned one of the most brilliant observations ever.

Pork, what's not to like, Roast, Belly Cuts, Chops, Sausages, Hog Roasts and Bacon - thick cut back bacon my favourite!

Eldest nephew got some "happy pig" cuts (IE free range) last year from the father of a friend and they tasted so good!

Where did you find those shots?

I eat chicken almost every day, the cafeteria at work does a very good job of it, either fried or roasted.
I can't imagine having to get up every morning to care for brainless birds, and worrying about predators all the time would suck, too.

I had a friend here in town who kept chickens for a long time and sold the eggs, now those were tasty!
The eggs, not the chickens.

Cute pig, reminds me of "Babe".

Chickens taste great. Chicken as a pet? Think I'll pass. Had to look after some when I was in college, and they did NOT endear themselves to me.

mushy - they look like magnificent beasts, don't they? I googled "Diving pig" and up came an array of dazzling choices...

christina - is porkchops with stewed apples a German thing? I've never had that. Chickens are delicious, and farm eggs are so much better than store-bought.

kevin - *L* I can understand, but I think they are cute.

Chickens is fer fryin'. Dogs and cats is fer pettin'.

Phlemmy!!
Did I enable ya on some "Chicken Lovin"???? You know you are more than welcome to come hang with the gang anytime you're up here!!Trixie would love to sit on your lap or help you find bugs in your garden!! That website is a great one...we've had it bookmarked for a while. And it is TRUE! Chickens like to get up in the A.M..nervy! ( we have a thing: whoever gets up first lets them out...and guess who just got up at 10 a.m.?...) Buffington is still learning to tell time however, and put on quite a show for the internet guy yesterday at 3p.m.He spotted a coyote in the field across the street while on my roof: one of the reasons we keep them in an enclosed "screened in porch" and lock them up at night.

I never even knew there were diving pig shows in the first place. I must lead a very sheltered life.

If I had a pool in the backyard though, I would absolutely get a pig or two.

You convinced me -- pork chops for dinner tonight!

Don't know if it's necessarily a German thing, but that's how my Oma made them!

I like how you got the oblique Aquarena Springs reference in there.

Now you're making me chuckle - I had a blind date once with a guy who used to sit on a chair and launch himself airborne with dynamite at fairs and such. He didn't exactly blow my dress up however.

Aquarena Springs! Glass-bottom boats! Wow, that brings back memories. Sadly, there is no more Ralph (the swimming/diving pig).