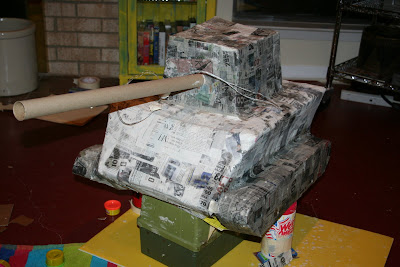 OK. this is why I don't have a proper post for Saturday. I'm a zombie, by now, but a day from now, this is going to look amazing. *fingers crossed* I'll be relieved to have it all done, though. Almost all the papier-mâché is complete, and I have 3 chambers to fill and I'll patch those fill-spots in the morning, and then I'll begin painting by midday. The wheel assemblies are a little lower than I'd planned, and I've ash-canned the fender thingies, and I've pared down to a Cliff-notes version. Anyway. All that really matters is good bang for the buck.

I've spent so many hours on this that I keep thinking about those folks who make enormous, elaborate holiday meals over the space of several days, all for the mere enjoyment of watching the family devour same in the space of an hour. Well, it'll be something like that. But it'll be fun.

Strongly suspect this will weigh nearly as much as the boy himself. Watch this space.
Posted by phlegmfatale at 2:46 AM

He's going to love it!

I love these posts about this pinata. You are a marvelous aunt. When I was ten or so, our cub scout den made kinght's armour out of 5 gal. paperboard ice cream containers. My favourite aunt thought I needed a sword. She made one from some baseboard trim, complete with an edge; she drew a family crest on the hilt. It was great.

a-frickin'-mazing. You're doing good there, kiddo. You're talents are never ending.

groovy! he is wound up and flippin out! A

brbiswrite - Thanks! I LURVE making things, but nothing so much as the pinatas for niece and nephew. Yeah, it's great being an auntie, and your auntie sounds like a fun gal. It's great to delight little ones like this, and the effort seems minor compared with how much I enjoy making them happy.

myron - wow! You really think so? Cool! That means a lot coming from you!

Actually - thank you everyone who says nice things about this - I'm really enjoying making the tank.

Sis - I'm excited for him. can't wait to see him beat the crap out of it!

I suspect there will be one very happy and gobsmacked lad when you are done.

It looks great and so tough it may not crack open! They may need some depleted uranium tipped sticks!

That Tank looks amazing, I can just imagine it with it's caot of paint. You said you were going with the Desert Paint job, right? That is just gonna be the BOMB!
Son would have loved havin' you for an Aunt. You are the coolest Aunt I have ever seen!

Wowee! You're the best!

barbara - yeah, it's full of plastic dinosaurs and about 2 pounds of a variety of smarties and charm's blow pops and party poppers and plastic farm animals and sweet tarts and a bunch more stuff. I hope he'll really enjoy it. I think he will.

holly - aw, shucks! I hope he has a good time. Sis says he's wound up today.

schnoob - a tractor is something he and I discussed. A combine pinata would be awesome!

Wow ... this is a stunning progression from its stick phase!
Can't wait to see the final with paint.

Appreciate your sympathy for and attention to the sagging gun. You're a sublime artisan. By the way, how about some more glasswork?

That is a Tiger!