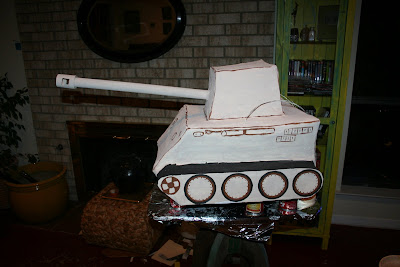 I had to spend the first half of the day salvaging a saggy gun, which really derailed the whole process. So, I'm happy that I'll at least have it finished and have a gun that's not trying to point at the earth's core.
8:30 addendum:
It's finally finished, such as it is. In some ways it's worse than I planned, and in other ways it's better than I hoped. In any case, it is what it is, and within about 6 hours, it's going to be smashed to bits, anyhoo.

So here's the final flourish - exploding-confetti-Osama-head peeping out the hatch, which I just applied. I generally eschew hot-glue gun for this type project, but yesterday's derailment called for the immediacy of hot glue. I'm pleased how the egg cranium turned out, and the mohair yarn for beard gave a great texture. I'm also quite pleased with the turban.

By the way, the "torso" and hatch lid are made from a Starbucks™ corrugated cup wrapper and a cup lid. I'd like to think someone would be a little irked by my creative license, but that's just the kind of hairpin I am. 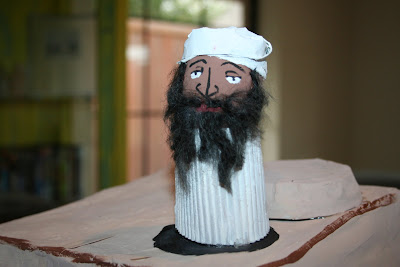 Posted by phlegmfatale at 1:20 AM

I'd like a hot looking nekkid man for my birthday. Think your up to it? LOL

You have done a great job there - I am sure that your audience will really love it.

Wouldn't want to have a saggy gun now would we Miss P?

Looking good! I like the muzzle brake! Most excellent!

A saggy gun always tends to derail the process 8>}. Lookin' good though.

I keep getting spam emails offering me products to help with that saggy gun problem, through the mail. They also promise me a 2% home mortgage, unknown riches through stock tips, a sexy new Russian girlfriend, and a major cut of a lost Nigerian fortune if I'll just do the spa.. er, offerer... a favor.

But about that gun: why not use PVC?

dba dude - Thanks! Now it's almost 8am and I'm about to glue on the last bit. Huzzah!

xavier - we mos' debly don't want the saggy gun to throw us off our game! Thanks - I thought the muzzle brake turned out rather well. I was disappointed NOT to fill the gun with candy, but that's what caused our little issue earlier, so that one's not only not firing blanks, it's just flat-out NOT firing.

myron - Indeed, we can't be having none of that. Important to stiffen one's resolve when it comes to weaponry, eh? Thanks!

matt g - pvc would've been fine, but still a little heavy. What first tipped the gun (overnight Friday night) was the weight of the candy in the gun made the housing come un-fastened from its base inside the turret. Then I cut open the turret Sunday morning and re-mounted it with more wet newspaper, which to my surprise turned the wrapping paper tube I'd used into pulp by mid-afternoon. I tore the tube off at the stem, turned it around and cratered one side in a little so I could stick it on back in. The turret was so packed with candy and goodies that I was able to seat the gun snugly without adhesive of any kind.
It's actually desert sand color, and not white.

I just finished the final flourish, which is an Osama bin Laden head who'll be sticking up from the hatch. I made the head from a blown-out egg, and filled it with confetti. I'm hoping for a technicolor spray of confetti that'll be part of Sister's yard for the next 50 years.

That looks awesome! If I was a 10 year old kid (and some days he's still in there), I'd be proud to whack that with a stick.

I'd also suggest that if you're going to paint it, to use Krylon or other spray paints and avoid anything water based to prevent the paper mache from getting all mooshy again.

Wow Phlemmy! That looks great! Too bad it's going to get smashed up, really...

Great job, Phlegm, that is SO cool!! And I love the bin Laden addition! The 4th of July that KSA was deployed, we got a bin Laden firework that lost it's head!

He's lucky to have an aunt as special as you.

that is fantastic! you should have let him do a little target practice on the head before the whacking begun ;) I LOVE THAT