Tuesday I talked to someone who went to Burning Man festival out in the Nevada desert last week. Theoretically, Burning man is an arts festival, but in truth, it's just an excuse for a bunch of neo-hippies to get drunk and run around naked and stinking in the desert for a week. Ew.

Well, I knew it would be a debauchapallooza, but I didn't think it would be to the degree that it would be unenjoyable if you weren't a strung-ou 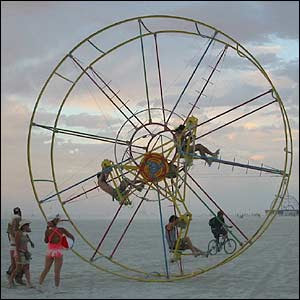 t exhibitionist. I've always wondered about burning man, because people take experimental vehicles out there for exhibition, among other things. I also think the guy who runs Survival Research Labs in the Bay area has taken some of his machines out there for demonstration. He's built these big insect-like vehicles, and has a rat or a roach hooked up to electrodes on the machine, and the bug or rodent completely determine the direction the machine moves. It sounds exciting, if a little dangerous. He also likes making exploding things, which sounds interesting.

She said the whole place was stinky and the word "nasty" was a part of every sentence she uttered. She said the naked hippies were covered in sand and just didn't care who saw what. Yuck. (why is it that people who shouldn't be are incredibly comfortable naked? Also, have you noticed there are no nudist colonies for the blind? Hmm?)

I asked if that meant it was horrid to be in a tent for that event. She said they were in an RV, and it was still dreadfully nasty to her. She said the art displays were amazing, but that the rest of it was just too wild for her. The party started at sundown and pretty much went until 9am, so there was no sleeping at night.

Good Art can be found in a lot of decent places. Who wants to get nakkid and see nekkid people just to find a treasure? EWE!

Gee, everyone I know who's been, loved it! ;-) (honestly.)
Sounds like she didn't mean "nasty" in a good way.
Line from an old Cary Grant movie: "Why do bohemians have to stay up all night?"

You know, I've always been kinda curious about Burning Man, and I'd like to go there at least once I suppose... hearing about naked flabby hippies is a bit off-putting, though.

wonder how much money those people bring with them, sounds like a good place to make some. A

Party from dark 'til dawn. Reminds me of the ships parties we had in Yokosuka in the late '50s. Started about noon Friday and lasted until the wee wee hours Monday morning. Visit my BREAM photo pages to see a few photos from 1958.

g bro - Yeah, it was a very different accounting than I've always heard. Surely the vast majority of folk remain clothed? Surely she was merely obsessing on the "nasty" bit? Love that CG quote.

kevin - Yeah, I've always wanted to go check it out. Like I said, surely the "everyone was naked" bit was an exaggeration. HAD to be.

Sis - ah, you're such the little capitalist. But remember - naked people don't have any place to tuck a wallet.

myron - eep! I'll bet that was an intense party. Thanks for the link - I'll go check it out.

Yep, always wondered about that place. Looks cool, but I bet it's crazy and smelly, as you said. Terlingua sometimes approaches that, but in a much milder way.

I know some people who go and I don't think it's really about "art" so much as that's an excuse for going and a claim for their self-exceptionalism, but from what I can discern it's much more about being hipper and cutting-edgier than all the rest. Hip-snootiness is what they extend, but it's really a geeky Post-Apocolyptic Rennaissance Fair... Sheesh.

IMO RV's are just big, rolling, porta-potties - being stuck out in the desert heat like that...ugh.

Sounds like the parking lot of a grateful dead concert.

lots of people from work go to Burning Man. One came back with a lot of digital pics that she put on a server to share, and, oops, lots of boob shots with some experimental bra

I never understood why they wanted to go there in such heat? Never sounded like a really fun vaca for me either. Plus, I dont want to run into co-workers without their clothing

hey we need to talk. Have you ever written any thing on country music (no, really, something like review? a NICE review ;) I will call you later

I just don't understand the appeal of hanging around a desert. The nekkid hippies sure don't help.

dirtcrashr - perzackley -not my idea of a vacation...

kim - me neither - not my idea of vacation