Stories from the ancient history of me...

Once upon a time, boys and girls... I lived in a fantastic loft near downtown on Harwood next to what was then Austin Steel Mill from 1988-1994. We had hookers in front of our building but that was ok, because they were interesting to watch from the roof. We would hang on the roof, smoke and drink, and a good time was had by all. It was beautiful and quiet, and close enough to downtown for a spectacular view. Time seemed quite charmed, then.

There were 13 lofts in the building, and the neighbors were the best. Gradually I've lost touch with all of them, but I hold fond memories of one New Year's eve when we all dropped acid and listened to local rockabilly god Reverend Horton Heat. You haven't lived until you've heard his 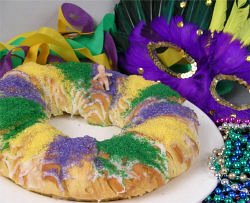 meisterstrück Marijuana or Psychobilly Freakout completely trashed. But I digress.

Great neighbors came and went, but among them were Thom, who now runs (or ran) the Texas Embassy restaurant in London, Tom & Peggy (photographer & makeup artist who moved to open a gallery in Oregon), Richard and Ashley, (he, photographer, she - jewelry designer), artists Jeff & Cindy, and sundry others.

I know you're dying to know how that garishly colored cake fits in, and you're probably guessing it's some sort of memorial to Selena or something. Nope. Fat Tuesday 1993, we gathered in Richard & Ashley's loft for a king cake, which is a New Orleans Mardi Gras tradition. The cake is sliced up and doled out to everyone, and whoever ends up with the piece with the little plastic baby Jesus inside will have a very fortunate year.
As hostess, Ashley wielded a huge knife and cut into the cake then drew the knife out with the little plastic doll partially dismembered and stuck to the knife. She found the king, but this was a rather auspicious way to come upon it. Later that year, Ashley and Richard divorced, I met husband and moved to a conventional neighborhood, and we all scattered to the winds. Ashley moved to Houston where I assume she still lives. She made some incredible jewelry which I and my sister still wear. I heard that Richard moved to San Francisco with some other artists. Since I don't plan to abstain from any amusements, Fat Tuesday can come and go for all I care. I do relish the memory of that one time, though. It's a sweetly melancholic remembrance this time each year: scattered friends.
Posted by phlegmfatale at 12:01 AM

Greg - Cowboy in the Jungle said...

I do so love Mardi Gras and ALL of the traditions that go with it.

I miss that holiday. Thanks for bringing me a piece.

I think that image and irony would keep me laughing for 12 years too.

Happy times. Nice story, bringing back some good memories for me too. Isn't it sad how we all procrastinate over keeping in touch with each other ?

Traditional pancakes tonight! Because I'm going to do everything in my power to live up to the fat in Fat Tuesday!

I haven't heard Reverend Horton Heat in years. Excellent smoking music back in the day. Thanks for the trip down memory lane.

What a great post, Phlegm! I have some memories like that, too. You've got me to thinking.

greg - you're welcome. it's a nice thing to remember

becky - yeah - it was baffling we were all speechless for a minute, then we laughed our asses off

ben - yeah, it's too easy to lose touch

liz - eat a short stack for me, would ya babe?

lightning bug's butt - high praise from you! Again, it's sweet to be reminded and just think about it all. Time is such a funny thing. At 40, I feel I'm just figuring it all out, but way back then - I KNEW what it was about! *L*

Great story, it's amazing to think how strong great memories are, even when we look around and anyone who can recall them with us are no longer around. You may have inspired me to post something about memory..

this also makes me drawn to the king cake and the baby jesus (risks of dismemberment and all). May need to add that to my hodge-podge of traditions.