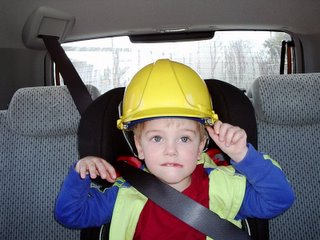 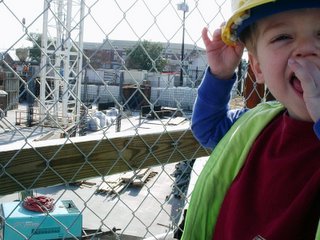 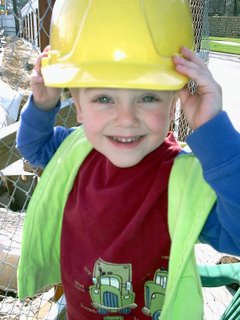 OK. Time for housecleaning again. When the golden niece was about 3, we began having "girly day", and I would pick her up early in the morning every Wednesday, and we'd go to breakfast and make a list of all the fun stuff we would do. We went to tour the now departed Mrs. Baird's factory once, and we nearly always stopped by their discount bread store and took bags of bread to the ducks at a local lake. We had lots of creative projects going, and we liked to go to the marvelous Froggies five & dime on Knox, which is a great Christmas stocking-stuffer store, by the way.

So the beloved nephew is now 3 and we had our first auntie-nephew day recently. We went Downtown so he could see all the cranes working, which thrills him. There was fencing at one corner of this site and we stood there and watched a concrete hopper filled from a cement truck, and then they hooked it up to the crane and lifted it over to fill in a wall. This was very exciting for nephew, and the job foreman even took note of him and came over to talk to us. He looked quite the little man in his hard hat. Then we went and shopped for his first piggy bank, and he found an adorable doggie bank he really likes. I bought him a Bob the Builder set last night with a backhoe tractor thingie. He likes to see how things are put together, and I think he has the mind of an engineer. We'll see. In any case, our first outing together was a success. Here for your enjoyment are some of his first job-site photos.

Niece is 9 and planning to become a veterinarian. My cat-obsessed sister said "great, then I can have my cattery and you can treat all my cats for free." Golden niece said "oh no, you'll pay just like every one else." I have trained her well, I believe. You should have seen our power shopping binge at Nordstrom Rack the day before Christmas. In about 25 minutes, we found gifts for the last 8 people on my list, and spent about $200. I'm teaching her my power-shopping ways. Good thing she's aspiring to a well-paying field. Then again, she's going to be tall, lean and leggy, and she won't need a high dollar wardrobe to look like a million... No one cares what a pretty girl is wearing, yeah?

So, morbid curiosity got the better of me and I had to take a gander at Lisa Loeb's reality show called #1 Single. I've always thought of her as not the type to do that sort of thing, rather less mainstream than to do something so personally exposing. (Wouldn't you think so, Liz??? I mean, you went to high school with her, didn't you?) I'm chalking it up to the pressure from her Jewish mother who's constantly talking about babies and being a grandmother. Maybe it's her way of saying "Look mom, I'm really trying here." That's some evil pressure, I would think. And then to top it off, she's looking for a man in New York City??? Puh -leeze! The guys she keeps going out with are SO unmanly. Yuck. No wonder everyone there is trying to boink the firemen - the rest are just girls with dicks. Yuck. (The amazing Zelda had an excellent post on dealing with a highly-feminized man recently). This one jerk kept taking phone calls during their dates and then left her at the zoo after getting a phone call. I'm thinking either NYC women are stupid about men, or our Lisa has some self-esteem issues. Phlegmmy would have been on the curb hailing an effing cab before his rude ass got off the phone THE FIRST TIME.

When I met husband, the second time he came to pick me up for a date, I heard someone at the door, which was ajar so my dog could come and go as she pleased, and I went around the corner, and there he was with a screwdriver, tightening my doorknob. I thought "I'm going to marry him." He unflinchingly kills bugs with his bare palm. He can fix anything that is wrong with my vehicles, or at least duct-tape them together ably enough that we can get it to my pa's garage, and he does plumbing and electrical. AND he has a great brain - he's a computer engineer thingie - great problem solver. Very talented, technically minded rugged dude. When I think of choosing a mate in the Darwinian fashion, a physically capable and rugged computer dude is pretty much the ideal for me.

Anyhoo - that's my Monday mornign ramble. Y'all have a great week.
Posted by phlegmfatale at 10:09 AM

A few weeks after we'd been dating, my husband then boyfriend decided my ugly little chicken wire pen for the Rat Dog was dreadful. I came home one day to find him building her a spiffy new pen. I knew he was a keeper.

He cooks and can be sensitive in his own way. But he can fix stuff, all kinds of stuff, everything.

Yeesh. I can't imagine a guy who couldn't even change his oil.

I dunno, this is the *second* TV show that La Lobe has been in. The first was on Food Network with now-ex Dweezil. I can get behind a cooking show. (At least until the point where she described herself as "a bacon-loving vegetarian".) But an E Online reality show? I think she's said a fond fairwell to her indie roots.

As far as self esteem, I think she's traded that for the cash she's getting from the show.

Your nephew is adorable!!

pat - good on us for finding good ones and nabbing them quickly!

liz - I didn't know about the earlier show - maybe it was while I was too absorbed with school for television???

Thanks writewingnut - we are overly fond of the little guy, but then we are not at all objective. He's a little bundle of joy, mostly, but throws fits that make me want to spank his mama (my little sister). At least I get him in small doses, and he never throws a fit around me - I just hear them on the phone and it sounds like he's lost a limb or something.

If I were ever so unfortunate as to become a widow, a New Yorker would be sewer level on my list of guys with which I would have anything to do. They are boorish yet feminine and they are the most loathesome male specimens to ever drag their knuckles across the earth.

Have I held too much back?

zelda - you really must learn to be more forthcoming with your opinions. Yet again, we are on the same page, and as usual, you put it brilliantly.