Sex Pistols tell Rock and Roll Hall of Fame to stuff it...

In their note declining the invitation to attend the ceremony marking Sex Pistols' induction into the R&R H o' Fame, Sex Pistols derided the fatuous self-adulatory ceremony which is ridiculously expensive 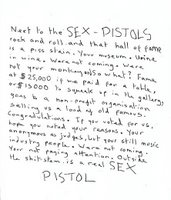 to attend and therefore exclusive domain of industry insiders.

By the way - John Lydon's Rotten Television was a great show - too great to last. Hollywood freaks out when confronted with straight-talkers. And by straight talkers, I'm not referring to Sean Penn or that useless Clooney or Sarandon/Robbins-bot. The truth is often not pretty, and John doesn't mind not looking like a loved-up himbo or celebutante, God love him!

I saw the John's Public Image Ltd @ the Bronco Bowl in Dallas, all those years ago. He came out in white suit covered in fluourescents and bathed in black light- and every body was Happy. 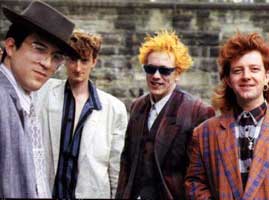 What a fab letter, I had never seen that before. There is the definition of punk right there.
Great post, love your blog it's always something new to me and notable.

I am thinking of writing a similar letter to my rotten neighbour upstairs whom I loathe.

You'd think he'd mellow with age, but Lydon is still as confrontational as ever. I saw him interviewed a couple of weeks ago on MTV2 and the interwiewer (respected DJ Zane Lowe) was shitting himself. Lydon was ridiculing The Pistols, The Clash, Sid Vicious, Greenday, Malcolm MacLaren...everybody.

Yeah, jacquie - it's so for real. I'm so glad you like my little ole blog. It's healthy for me to have an outlet - keeps me off the streets, ya know? As to the letter to the neighbor - write the letter, get it all out, and then burn it. Be overly cautious about venting spleen in writing to the offending party - things have a way of escalating. She will still be your upstairs neighbor, and she could bring in a herd of pygmy goats to keep you up nights...

I don't know, ben, I think John is far more intelligent than anyone ever suspected, and his bullshit meter is on a hair trigger. He's more a societal barometer than jester, and I think we definitely need that. Equal-opportunity offenders are fun to watch. Poor Zane, but he probably needed to be put through his paces anyway!

After the hotmail crib, I have another - who in their right minds would put a picture of Reese W. on their blog? I always think she looks like an albino piranha with intellectual pretensions.

Your blog feed (RSS? Atom?) may be out of kilter, I bloglined you and your last few posts haven't shown up.

They couldn't have done anything else though, could they? I mean if they had done they would have gone against everything they originally stood for!

Anarchy in the Old Folks' Home...

Thanks arthur... I'll have my details man get right on the RSS thingie. Awww, Reese can be quite attractive.

Exactly, ian. I love them for their consistency.