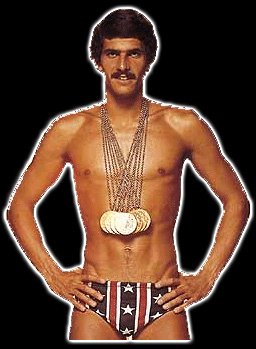 Of course, I'm always saying how I like funky off-beat sorts of things, but this donut/cd/wtf-is-it medal design for the 2006 Italian winter Olympics is taking that liberty a bit too far. See exhibit A - Mark Spitz with his big swinging deck of medals and tell me what's more impressive? When people hold up their medals for the money shot after the medal ceremony - they always look like they're about to take a bite out of them, conjuring wooden nickel bite-tests of a bygone era. I think considering that Italy is one of the most innovative design centers of the world, they could have come up with something remarkable and fresh without making such a bizarre departure from standard medal design. But that's just me. Certainly, no one will ever confuse these with the medals awarded at any other Olympics, will they? If that was their goal, they certainly succeeded.
Posted by phlegmfatale at 12:30 AM

Hahaha - Mark Spitz. He was another one myheritage.com said I looked like! Unbelieveable :)

Oh, I had to read that again. I thought you said Mark Spitz had a big swinging metal...no you did write deck

Wow. I'll ask on your blog, too, but has anyone ever told you you look like the people they listed on that site as having similar features/facial structure? That's an interesting thing...

Now, now, hoosierboy - when have you ever known me to be lewd? *tee hee*

When you said funky off beat things I thought you meant that hot Mark Spitz pic.

I had no idea about the new medals, I don't think that's right, I thought they were somewhat uniform. Won't the Turin athletes still long for a "whole" one and be sad if they don't get another olympics? "Oh you are an olympian? Can we see your medal? Oh..it's just a Turin one."

yeah, what's up with those medals? How are the male athletes not gonna feel like sissies when sporting those ugly things nesting in their chest hairs when they go out to pick up chicks in the athletes' village!?

If nothing else, you would have figured the Italians would have thought of THAT!

Sorry, I'm too distracted by the 70s mustache.

I think you are obsessed with the Spitz, jacquie.

Dunno, rocky - it's messed up. for sho. Then again, we know how Italians love to sport a lot of gold. What would be great would be a ghetto-fabulous chain of big Turin medal links. total pimp!

You know you love it, becky.

And at least the Spitz is not wearing a banana hammock.

Yeah! What's with the hole?

They were being arty, LBB - it's negative space.