I'm a last-minute kind of person. I've always been extremely creative and solving design problems are very like fun puzzles to me. Sometimes the solution doesn't come until I'm painfully close to established deadlines, and I wish this were otherwise. However, when the answers come, they are the best possible solutions, so I prefer to wait than to start slogging away and wasting materials on sloppy firsts. Virgin shit is so overrated anyhoo, unless we are talking things available in "extra-virgin" states, like olive oil.

The glass art gallery in Dallas is waiting for more of my jewelry. I finally took some in the day after Thanksgiving (I buy glass rod and gold leaf there, and they've been asking me to let them sell my jewelry for a couple years now). They sold the shit out of it over the holidays, and they are waiting for more, and greater variety, at that. Of course, I've been making lots of heart beads, and it would be nice if I reaped some of the spoils of last-minute Valentine's Day gifting. The problem was I didn't have an attractive and time-effective design for the necklaces to hang the hearts from. I finally bought some raw silver chain and jazzed it up with crystals - an idea I only hit upon this afternoon. (I'll try to get husband to photograph some of these and get them posted later today.) 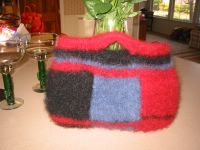 I'll deliver it in time to get about 24 hours of Valentine's sales. huzzah.

Here is a photo of a groovy bag my friend Liz made for me. It's knitted and felted. She makes the most amazing sweaters. She's currently teaching knitting classes and being pursued by publishers for some of her designs. Isn't it great having talented friends???

Oh, this is turning into a rambling, housekeeping/what's new sort of post, so why stop now?

DVR/Tivo has changed my tv watching habits forevuh. I used never to watch commercial television, abhorring commercials as I do, but now I can whiz through them, there is occasionally something worth watching in between commercials. 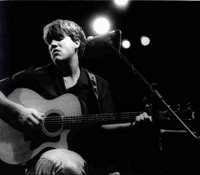 I admit I have succumbed to the guilty pleasure of American Idol, but always after broadcast. I don't know his name, but there is a guy who has advanced through auditions who would be the end product if Bob DeNiro and Joe Cocker had a love child. He has salt-and-pepper hair, and is unusual in his technique, but he is an amazing singer. I hope he wins, because he is so NOT Hollywood. Watch this space. 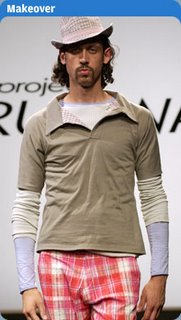 I'm also enjoying Project Runway. Santino's (pictured left)monotonous pedantic (effeminate) drone has gone from annoying to endearing, and he's such an out-there weirdo that by now I'm hoping he wins. He's made some piss-poor choices, but he has strength of conviction and doesn't waver when challenged about his designs. Go Santino! Woo hoo! My love of the Santino was cemented when he critiqued a fellow designer's creation by saying "You can't polish a turd." I'm going to say that all week. That's my bon mot de semaine. ...or whatever week is in French. (Need to bone up a mote on my vocab before I start slinging it around like I understand it, don't I?)

HBO series ROME bears a second mention here. Hopefully HBO will pick it up again for a second season, rather than pinching it off mid-dook like they did Carnivale. Yeah, everyone but me thought that was a steaming pile, but I loved the costumes and the performers. Brilliant first season, second season: not so much. Deadwood is a-ma-zing, darlings. Good good shit. Any series with the magnificent Brad Dourif gets my vote. Awaiting another season of that, too.

What is up with all the plastic surgery programs these days (I know, third post in a row mentioning America's favorite elective surgery)??? Discovery channel has all these programs on that are paid for by American Society of Plastic Surgeons, but they are presented as straightforward educational programming when in fact they are merely hour-long commercials for their industry. You'll note there are very few "plastic surgery gone wrong" shows, and as I've mentioned, most plastic surgery only goes the wrong way. It's a screwed up world.

Have a great Monday. I can't wait to give your Valentine gifties tomorrow. They'll be über-special for all my little lambs.
Posted by phlegmfatale at 1:36 AM

Lol I just discovered I have exactly the same PJ trousers like Santino on the picture, maybe I should start wearing them outside the house

Well, it takes a certain kind of guy to go out in public like that, knight, but the first step is admitting you have pajamas like that. I'm proud of you! *wink*

I love Santino, but I'm interested in the editing of Kara because they are depicting her as the late bloomer who is going to take it all.

Yeah, but those reality shows are notoriously bullshitty when it comes to foreshadowing a win for anyone, and they've been slapping santino on the wrist quite a bit lately. He's the enfant terrible, which goes a long way in fashion circles.

Must be awesome to sell that jewelry like hotcakes, babe!

Seriously though, good for you!

I'm still looking for my niche...

Well, it's not bad, but I need to exorcise my procrastination demons because I've got one big show and hopefully soon 2 more stores to stock... I've kept working daily, so hopefully it won't be such a mad rush at the last minute in future, even though that's my modus operandi.

I agree - the salt and pepper haired Idol contestant is the best by far.

He is Taylor Hicks, from Birmingham, AL I believe. Auburn grad student, been on the singing circuit for several years, apparently.

The way he sashayed into the final cut playing his harmonica - priceless.

He reminds me of Michael McDonald, Joe Cocker, with maybe a pinch of Ray Charles for good measure. Hope he lasts for awhile, or at the least, gets enough exposure to get signed with someone reputable.

Yar, he's kinda sex-ay - seems like a man - unlike all the little boys that have been on previously. His style is a bit interesting, but the voice itself is beautiful - Yeah, Michael McDonald, too, and a little Steve Miller, honey, which is a good thing. Yeah, someone will sign him, no doubt. He's so soulful that it can't be an act, and it can't be taught. I may have to stop watching if he doesn't go all the way to the end.