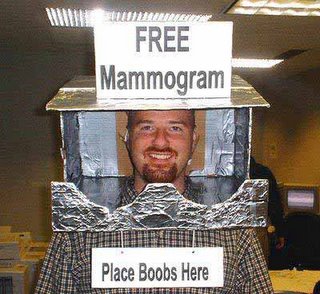 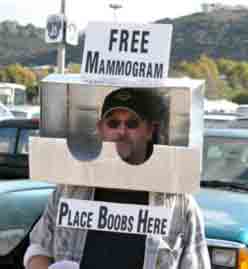 I suppose there's a lid for every pot. I kept seeing photos of different guys with this free mammogram box get-up, and I couldn't help noticing the variant of cup size which is a very time-saving feature for men. We ladies can quickly discern if our funbags are the gauge the gentleman in question is seeking. For example, the guy in the daylight (no doubt attending a municipal tractor pull/barn raising event) likes them small and perky, whereas the eager fellow in the above photo likes them spreadin' out so far and wide that they have their own zip code.

Now, boys, I know you go into a fog when you see the breastage, but you really disappoint me with your lack of originality. If you were truly creative, you'd have breasty holsters on all four sides of your "clinic", the better to serve the female of your kind. Step it up, will ya? I expect better from you in future.

Oh, and one day soon, me and my posse are going to design our own mobile-proctology unit for helping out you guys as a thank you for your concern about our reproductive health. We love to see you cough, and we promise to be gentle. Trust us: we're professionals.
Posted by phlegmfatale at 4:34 PM

Oh this is hilarious.

Thanks for visiting The Dumb Ox. Pop by and leave a link to any post you want to promote, any time.

The free mamogram thing is a great idea, but only if it works like the real thing. Then, it would squish the shit out of the head of the dofus in the box, as well as your boob.

Send her to the mammogramers.

Did I ever mention I was a fan of the breast?

Yeah, but as most men think - getting squished to death by boobs is a great way to go - at least I think dick would happily leave off this mortal coil in that method.

See how dick is? As I said, he's in a breast-induced fog.

just..think...about how much...time..they spent making these...Ladies it looks like they mainly frequent parking lots, so the usual parking lot caution will do.

BTW, Phlegm thanks for coming by my blog before. I did the candy necklace reveal on the 12th.

jacquie - it was a labor of love, no doubt. I think I'd rather get mugged than encounter one of these guys. I checked out the candy necklace thingie - OMG.