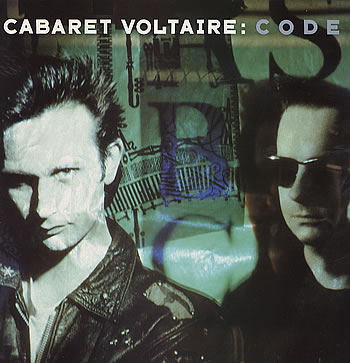 I still love Cabaret Voltaire. "I Want You" from "The Covenant, the Sword, and the Arm of the Lord" rates as one of my favorite songs ever. And "Don't Argue" from Code has one of the best videos ever. Popular/dance music seems on some 20-year delay, like they're just now wrapping their heads around what CV's Kirk & Mallinder did in the early 80s. The progress of techno/industrial has been a sublimely strange journey, but somehow CV still always seems fresh and remarkable. Aside from having a voice on the seething side of a purr, Stephen Mallinder has a great look befitting the chilly menace of techno/industrial. Yum. The "Don't Argue" video, circa 1987, features grainy color footage of what appears to be Nevada badlands, people in outmoded clothing wrangling snakes, and women with beehive 'dos wearing 50's era underwear yelling and firing shotguns. What's not to love?
Posted by phlegmfatale at 9:13 AM

I was listening to "The Crackdown" over the weekend.

It was an excellent slice of electro-Punk Phunk, and I thought "Who in the world would be listening to this stuff after all these years ?"

LOL, LOL, and another hearty LOL.

phlegmfatale said...
This comment has been removed by a blog administrator.
5:11 PM

"someone, somewhere, cracks down."

Yes, I deleted my own comment owing to a spelling error.

exactly- what's not to love?