Some have expressed surprise at the elevation here of toothpick to political barometer, but it is indeed a very humble and yet marvelous device on closer examination. Let us consider the lowly toothpick which has been with us as long as the domesticated feline. Paleontologists have found scrapings on the teeth of neanderthals, which would seem to indicate that the dilemma of dislodging chunks of meat and veg from the grille predates such modern fancy grooming niceties as Dippity-Do, eyelash curlers and banana clips. 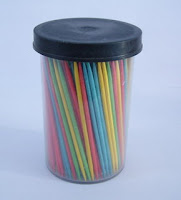 Picture the poor average guy (Joe the Caveman) out dragging his knuckles around just for giggles, hoping one day his descendents will quit inbreeding long enough to vote republican, except that he can't quite concentrate on such abstract concepts because he's got a bit of wolverine rib meat stuck between his molars. Ouch! Perhaps Joe picked the spine from an obliging nettle or succulent, and thus was the first toothpick born. Of course, we'll never know, but this is not much of a stretch. I well imagine that through a vast number of millennia, people were quite comfortable and casual to pick their teeth in public. Yes, it is done less often these days, yet there still is a toothpick dispenser on the counter of many an American eatery. Occasionally even a business card serves as a reasonable facsimile. You get the picture. Point is, the true calling card in life is one's smile, and it's only natural that one would wish to tidy up before bandying it about town. In one way of thinking, to efficiently clean the teeth after gustation is a concession to courtesy as much as to comfort.


Toothpicks have been made from every conceivable material. The earliest were probably thorns as I described, or other such, and over time, people forged metal into toothpicks. During the eighteenth century, jewel-inlaid metal toothpicks were the fashion. Even the first multi-tool most people acquire, the Swiss Army Knife, features a toothpick. Basic!


When contemplating political choices, is it not a good thing to see how considerate the candidates are, how they take a bit of care to remove disctractions which would pull focus from the real discussion? I think so. Thus does the toothpick indicate a level of social grace and conscientiousness. I'll tell you when we get to the president who is the embodiment of the Toothpick Principle, but you'll have to wait like good boys and girls...

President #5 James Monroe - 1817 - 1825
I had a bear of a time finding information on Monroe's opposition for the presidency. In fact, he was so warmly regarded that he won 232 of 233 electoral votes in his first run, the odd vote apparently going to Frank Zappa. As y 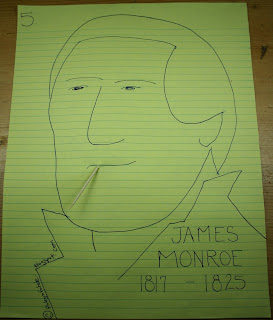 ou can see from the expertly rendered and very professional-looking image I toiled about 3 minutes creating, he had the felicity to resemble a chiseled Kirk Douglas sort of guy, and doggone it, people liked him! Anyway, seeing as he was such the congenial sort, it's easy to envision him standing with the fellers by a pile of burning leaves, shooting the breeze and lying about chicks, all the while champing on a toothpick. Monroe had done a bit of diplomatin' (as we hillbillies say) and came up with a doctrine which was pretty much that folks in this hemisphere should keep their own counsel. Sounds fine to me. Apparently, the Europeans took breaks from soiling their own nests to criticize America for the Monroe Doctrine. Not so different now. So highly regarded and such a mild and balanced leader was Monroe that his presidency was known as The Era of Good Feeling. Wow. Uh, how could anyone feel good about America if Europe disapproved? That's not sposta be possible, someone told me today. 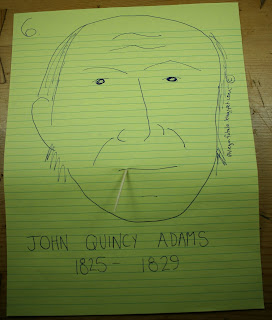 Now, this is another one of those hairballs, and at this point let me mention how sick I am of drawing those poncey, fussy collars, so JQA gets to be a floating head. Sheesh. I'm feeling all frisky over the thought of a Roughrider gitup, though, so I suppose I have that to look forward to. ANYhoo...You can see from this expertly rendered portrait that JQA doesn't seem as at home with a toothpick as we know his opponent Andrew Jackson would have been, and that's entirely fitting: John Quincy Adams was technically not elected. Andrew Jackson actually won the popular vote, but Adams and his family had a great history in diplomacy and the highest office of the nation, so Henry Clay led the electoral college to opt in favor of JQA. JQA made Clay his Secretary of State. Cronies, much? Love the chrome-dome, by the way, and he looks a little intense. I'm thinking Ralph Fiennes for the Lifetime movie event. Loved the nose, though. Nice nose on that man. You may have have noticed all the noses I draw look kind of alike, but that's mebbe because I can't draw and stuff. 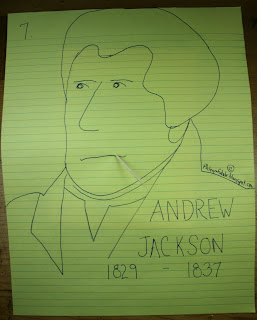 Total toothpick guy even though this is my worst drawing so far. At one time or another, I'm sure someone has hewn a very effective toothpick from hickory. AJ had an impressive head of hair which I had no hope of replicating, and this turned out a little Elvis/Liberace, er, sumthing. Here he is portrayed by Gabriel Byrne, as you can see, and he was a pretty handsome guy, in addition to being a badass. We love badasses, don't we, ladies? After the stinging defeat of the previous election, a very determined Jackson won the office in a landslide victory. He was the first poor-born US president, born to immigrant parents, and though he became immensely wealthy, he never forgot his humble beginnings. He was a duelling dude, and stared down the barrel of a gun more than once over slights or insults, which he never took lying down. He went to his grave wishing he'd killed Henry Clay. I have to say I personally adore Jackson for allowing the national bank's charter to lapse. He felt a national bank would be used to benefit the wealthy and powerful at the expense of the common man. I heartily agree. Jackson said "It is to be regretted that the rich and powerful too often bend the acts of government to their own selfish purposes." Nothing new under the sun, I suppose.

Coming up tomorrow: Martin Van Buren's Wild Hairs! More poncey collars! Presidents you never knew we had! It'll be ossum, possum! All the cool kids will be here.

If the toothpick theory proves out, I think you could be awarded an honorary doctorate in Political Science at some big-name joint such as Columbia or Harvard. Then you can hang about the sets of MSNBC/FOX/CNN/PBS/CBS/ABC and appear erudite, gesticulate, and plug your latest book.

Heh heh heh! You kill me!

This is SOOOO much fun! Love the expert drawings. I, too, am lookin' forward to TR's sketch and bio.

your talent astounds...plus I get a much needed humour pick me up in these dark blogging times...please continue.

somerled - I promise only to use my powers for good. :P It's nice to know I can make a contribution, however humble!

hollyb - Why, thank ye, kind Lady! The drawings are very special, aren't they? I, too, am looking most particularly forward to TR's big business. Oh, crap! I'd better get on the ball - six proper days of posts yet and we're not halfway to the 20th century. Tonight will have to be a whirlwind event, I spect.

thud - It's, uh, staggering, innit? I thunk it all up on my ownsome. I'm having fun with it.

I'm learning more about our history, one toothpick at a time!

Thanks for educating me, Phlegmmy.

Very well done, Phlegmmy. It's with absolutely NO exaggeration that I say your Toothpick Test is THE most inventive look at the political season yet... bar none. Good On Ya.

christina - Rilly? Wow! It's fun stuff to read about. Think of me as a gossipy Cliff Notes version of the history of the office. Not really. Just a fun jaunt through history.

buck - oh my goodness, Buck - you're giving me too much credit. I think our fantasist mainstream media this season have been far more inventive in obfuscation techniques than I could ever be at this, but I do thank you for the compliment.

Oh, Miss Phlegm, I am LOVING this series! First-time commenter; I swear I'll do so more often. Came over courtesy of Lawdog and AD.

But what got to me most--possibly even more than those magnificent presidential portraits--was the "ossum, possum" bit. I'm still LOLing, and trying find a way to use it in ordinary conversation.

ubicaritas - why thank ye kindly! Ossum possum is a cool thing to say, indeed. Say it early, say it often, and with my blessing!

Phlegm - the toothpick series is positively inspired. It's wonderful entertainment for the final week's countdown. I am not so sure I am ready to see Bill Clinton with a toothpick dangling out of his mouth like a Cuban cigar, though. eeek...

towanda - Aw, thanks, honey. I'm really glad you're enjoying it. I've been planning to do this for many months, but not until Sunday did I get off my lazy arse and actually start it. Clinton? ugh. Well, we must try to bear it as best we can, dearie! Thanks for following my crazy exploits!