The Toothpick Test
Chapter Three
The Awkward Years
Or, rather, my dog is being such a brat that this is an awkward post for me to compose... 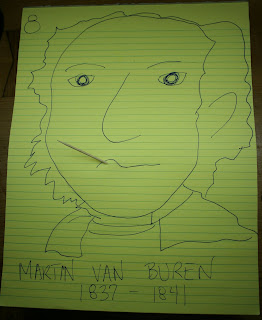 President #8 Martin Van Buren 1837 - 1841
Alas, Marty inherited an economy in decline, and underemployed folk turned to the gubmint for help, but he didn't think bolstering these struggling folks was the gubmint's job and he was not elected for a second term on crashing waves of popular enmity. No amount of toothpickliness could save his flagging reputation with teh pipples. He was unsuccessful in two more bids for the presidency, and this because the other candidates looked better with a toothpick, of course. Yes, we are learning, here. When he was Veep under Jackson, MVB presided over the Senate with loaded pistols. I s'pose he didn't take those into the highest office with him. More's the pity. Imagine Van Buren, guns ablazing, all that wild hair-- he may have been re-elected after all.


President #9 William H Harrison 1841, 32 days
*sigh*
It's... just...
*sigh*
What.. well.. oh.
You know when you see photo on a copied paper taped to the register at the kwikmart and you know no one'll ever see that person alive again because they just... look... doomed? Well, WHH was the presidential equivalent of the kid on the milk carton. Made of gone, daddy, gone. Sad. True. He'd enjoyed a distinguished career fighting Indians and was known as Tippecanoe, but even his own bad self was not tough enough to stave off the illness that set in when, during his wet and rainy inauguration, he spoke for three hours without a coat or hat. I re 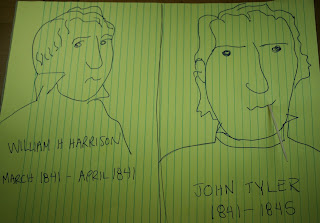 membered him when people gave Cheney guff for wrapping so well for one blustery inauguration. Fortunately for Harrison's Veep...
President # 10 John Tyler 1841 - 1845
...looked teh ossum with a toothpick! He was sort of the Abercrombie model of the first dozen presidents, though I know of no pictures of him in various stages of undress. Work with me here. I'm not the only one with an imagination. Tyler was a proponent of states' rights and continuously addled the Whigs in Congress by vetoing or cancelling the bills they sent him. *FUN* In fact, I like to think of him irritating the powder out of the Whigs as he ruminated, shifting toothpick from one side of his mouth to the other. His preoccupation and success in acquiring the Republic of Texas left him no time to make a successful bid for a second term. After his presidency, Tyler was elected to the Confederate Congress. 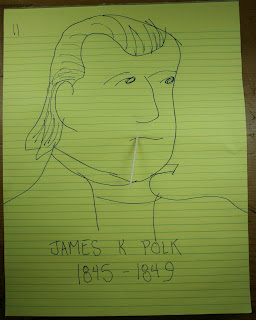 Polk managed to show a lot of grit by saying America ought to go from sea to shining sea, and proceeding to make it so. Perhaps in real life he looked slightly less like the product of an unholy union betwixt Alec Baldwin and Donald Trump. One hopes so, anyway. Polk managed to persuade Britain to sign a treaty with the US for the Oregon territory. Mexico was not so keen on Polk's idea of them selling the US California and New Mexico territories, so Polk waged war on them and took them anyway. That was a dish he may not have picked from his teeth so quickly - for that was one to savour. After these many accomplishments, Polk kept his promise to serve only one term. His last official act as president was to lay the cornerstone for the Washington Monument. He died of cholera later that same year.


12. President #12 Zachary Taylor 1849-1850
What is it about certain former Army guys? ROWR!
Let us review: Soldier = total toothpick material
Taylor was a career army officer and frontiersman and never even voted 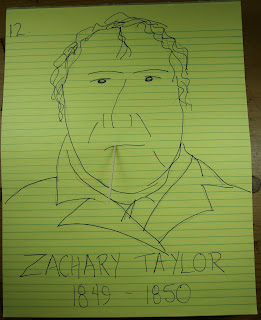 until he was 62. He was one of the few US presidents not to have a law degree, and the men who served under his command called him Old Rough and Ready. [!] Taylor owned a Louisiana plantation with slaves, but was influenced by Seward's belief that new western expansion states should not be slave states, and this infuriated the southerners who'd thought Taylor would come down on their side of the fence in this argument. This went a long way toward laying the foundations for the War of Northern Aggression. Indeed, he was willing to go to war to prevent any states from leaving the union, but would be unable to do so as he became fatally ill during the ceremony for the Washington Monument a mere 16 months after his inauguration.

So, what have we learned here?
You can look amazing with a toothpick, stomp the mud out of various ethnic groups and acquire lots of land and stuff, but a microscopic bug can still kick your ass, and that bug may look better on a toothpick than the toothpick looks on you.

I know, I know. I promised this post would be exciting, and it is, but not as exciting as I thought it would be. Perhaps I can punch it up tomorrow. Right now, I'm a bit punchy myself. The dogs are going bananas. Tomorrow we'll have some war, and stuff, and it'll get really hairy. Mebbe I can even find for you the name of the man who said Lincoln had the most superb thighs. I know: I wonder what that was about too. I mean, holy crap. What did Mary Todd think of that? Sheesh.
Posted by phlegmfatale at 12:06 AM

Wow. I'm hooked now. But however will I get my fix when you run out of presidents?!

christina - uh, *slobber* I think my creative center of the brain will be tapped out and that'll be all she wrote. We'll see. Maybe I'll have one or two other good ideas yet in this lifetime.

Maybe I'll have one or two other good ideas yet in this lifetime.

In your drawings Tommie Jefferson looked most comfortable with the toothpick, so he would have to be my choice. I think those drawings of yours belong in a gallery somewhere, by the way.

I can hardly wait to see Willie (will he have a cigar instead?)and W.

Teh Awesomez! I love the drawings, and I love that when he was Veep Marty presided over the Senate with loaded pistols - that's exactly the way we should keep an eye on Nancy and Barney and Chuckie and that whole gang of degenerate pustular boil-suckers.

In fact, I like to think of him irritating the powder out of the Whigs as he ruminated, shifting toothpick from one side of his mouth to the other.

Phlegmmy... you can turn a phrase quite unlike ANY other blogger I know except for, perhaps, Lileks. And that is HIGH praise, M'Luv. ;-)

James Buchanan, No. 15, had a weak chin and beady eyes with bags under them. I'm curious to see what you write about him and how the toothpick theory applies.

Don't forget to include the dogs of presidents--with toothpicks between their canine teeth. That's what your dogs were trying to communicate, don't ya know?

christina - I don't want to blow the whole wad at once, now, do I?

dirtcrashr - degenerate pustular boil-suckers I was just thinking the same thing. Glad you like these posts!

buck - OMG - LILEKS, is, like, my total hero. He's brilliant, witty and a delight to read. I have his Gallery of Regrettable Food, too. Good stuff!

somerled - Well, I focused on a nixonesque schnoz with Old Buck, but, yeah, I spose it is a weak chin. That post drops in less than two hours.
DOGS of presidents??? I LOVE THAT! I LOVE YOU for thinking of that. That's brilliant. Let's see, Checkers and the toothpick... Sometimes, my dogs are clearly smarter than me. I need you to act as interpreter. Are you available? :P