Now we're really going to whizz through a bunch of these fellows, sort of hitting the high spots. Since I found so little material on early also-rans, there weren't lots of ways I could buttress my theory on the toothpick comparison in the beginning. Now, however, that we've entered the age of still photography, my buttress will be flying right on through a swathe of these fellows like a knife through hot buttah, baby. Fasten your seatbelts and make sure your tray is in the upright position. I don't want anyone to spill their post-toasties. 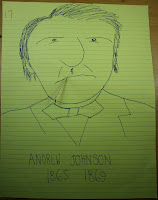 act. 2. Never follow an animal act. 3. Never follow a popular but dead president act. Remember that-- we'll see it again later.
Johnson earned his toothpick by virtue of sheer curmudgeonliness. AJ was short in stature and short-tempered. A senator for Tennessee when they seceded, Johnson disagreed with them and insisted upon keeping his Senate seat in the Union, where he was the only Southern senator to do so. Perhaps for that reason, Lincoln thought he'd be a diplomatic asset as vice president when it came time to reunify all the states. Not so. Johnson was something of an equal-opportunity offender. Soused at his inauguration as Veep, Johnson gave a speech berating people born to wealth, many of whom were in the audience and quite influential, at that. Mere weeks later, Lincoln died and Johnson could dearly have used the good will of all those folks he'd offended. Live and learn, ya schmuck! Johnson wanted to strike a conciliatory tone with the back-in-the-fold states, but the Northern congressmen had a taste for blood and impeached AJ, who prevailed in his presidency by only one vote. Meh. 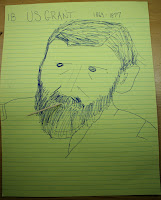 what a healthy bunch of hair this man had! He was the first one I drew with a pen without semi-sketching with a pencil first. Grant tried and failed at a lot of things in life. He was named Hiram Ulysses Grant but when he went to West Point, someone had entered his name into the academy rolls as US Grant, and since he was loathe to be known for the initials H.U.G., he didn't bother correcting them. Anyway, after many other failed careers, Grant rose through the ranks of the military and excelled, becoming the first American General. Grant was supposed to have been with Lincoln at Ford's theater the night he was killed, and he never forgave himself for not being there to save the president. Gosh, don't you like take-charge, responsible people? Anyway, some folks in his administration skimmed money and were not trustworthy, effectively scuttling Grant's job as president. After the presidency, Grant lost his savings when someone scammed him, and at the end of his life as he was ailing, he agreed to write his autobiography so he could earn some money so that his family would have money for support. His friend Mark Twain published the book.


President #25 William McKinley
1897 - 1901
McKinley was in the Ohio Volunteer Infantry and fought at Antietam, which, of course, gives him total toothpick cred, even if he was on the wrong side. As President, McKinley focused hi

s energy on making the US a great international power, acquiring more territory overseas and winning respect as a player on the world scene. When running for re-election, he selected young Theodore Roosevelt as his running mate to bolster his support from Republican party reformers. Theodore was focused on his political career, and nearly didn't take the Veep nod, thinking there would be little political adancement to be gained there. Shot by an anarchist in 1905, McKinley died and Teddy's career was off like a shot. [By the way, I found a place on the internet which said McKinley was shot by a "deranged anarchist," isn't that a little redundant, as well as repetitive, hmm?] This is the scariest drawing I've done so far. Mckinley crosses over into Ernest Borgnine territory here - a little intense, a little weird, but one heck of a guy in the Poseidon Adventure with Shelley Winters. The naked floating head thing doesn't help, either. Come to think of it, he looks a little like the guy who was standing behind me in the bookstore last week and breathing so loudly. I wonder what that was about? He was interested in the same sections of the store as me, too. Strange.

President #26 Theodore Roosevelt
1901 - 1909
Walk softly and carry a toothpick.
A sickly child, TR's father insisted he take much exercise for strengthening his bo 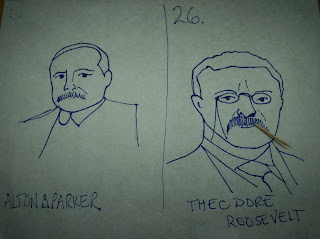 dy. As a result, Roosevelt became something of a fanatic about vigorous activity. Forming the Rough Riders regiment which served in Cuba during the Spanish-American War, TR became a national hero, but failed in a bid for the governorship of New York in 1898. The Rough Riders were a volunteer cavalry outfit, and as the name implies they were a teeny bit on the rugged side, which adds up to toothpick in a big way. In fact, to my way of thinking, Theodore Roosevelt was the very embodiment of the toothpick principle. A reformer and trust-buster, TR negotiated treaties between foreign countries (winning a Nobel Prize in the process) and was instrumental in the construction of the Panama Canal. TR's record stands as the only Veep to win reelection after assuming the presidency following the death of an elected president. In 1904, Roosevelt soundly defeated Alton B Parker, but look at the picture* - who does the toothpick belong with? Roosevelt also is fondly remembered as the first conservationist president.

*this drawing is a total cheat - quickly running out of steam and utterly out of my lovely legal pad, I had to bre

ak out the lovely Japanese calligraphy paper I bought at Uwajimaya in Seattle last time I was there. That's a great place for buying nice pens and papers, by the way, if you're the writing sort of person, or if you just have a paper and/or pen fetish. Anyhoo, the paper is very thin, and I traced these images from a clippy-art thingie. Yet again, I find myself having to forgive myself, and yet, haven't my drawings taken on a weird kind of same-ness? I mean, they're all looking alike to me, now. Tomorrow will be better, I think. No more cheating. I promise! The really sad part is that prolly some of you were thinking "wow, she's finally learning to draw!" Not so.
Posted by phlegmfatale at 12:01 AM

I noticed the medium change right away... and then bingo! your explanation followed, straight away. I'm with Christina... I don't think your drawings have a sameness about them at all... except for your style. Which is excellent, ya know. ;-)

It is an excellent style -- and even Phlegmmie's tracings show a remarkable economy of line. Most people don't know when to stop -- and that, right there, is the difference between scribbling and art.

christina - the yellow paper will be back in a very little bit!

buck - gosh, thanks so much!

roberta x - wow- high praise! Thank you so much for the kind words.

I dunno about art, but you and I have great taste in stores. I usually stop at Uwajimaya any time I find myself within 100 miles of downtown Seattle..