National Night Out Tuesday was a lovely success, and the company owner was very pleased with the event I put together and said so in our meeting Wednesday morning. Incidentally, his birthday was that day, also.


Wanted to go to State Fair, and I moseyed on over about 6pm. I thought I might stay an hour, mebbe. Then I realized I'd never really just walked around Fair Park alone, and I ended up staying a couple hours and concentrating on taking photos of the spectacle. One of the c 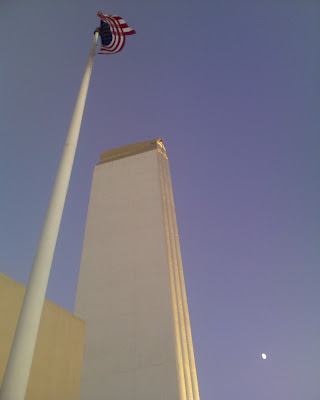 ool things about Fair Park is it's one of the largest collections of Art Deco buildings in one site in the world. Most of these buildings were erected for the Texas Centennial in 1936.

Someone told me Tuesday that the chicken fried bacon was good for the first few bites but then it got old and started feeling heavy and yucky. I did not have that experience. I stood, chomping this ultimate of pork products as I admired the grand champeen 254# hog Wilbur on display in the livestock bragging pens. Wilbur's broad backside was on full display to the passersby. I think he was already tired of the fair. I suspect if he knew he was destined for the dinner plates at some high-toned charity event, he'd be putting on the some-pig act. Poor Wilbur. Yummy bacon. Om nom nom!

Here's a photo I took as the gilt western edge of the bald eagle-topped 179' Tower Building caught the final rays of the day. A gentle breeze blew the flag, and a half-moon crept up to greet the coming night.

I returned home to find in my email that I had won 500,000.00 GBP, a lovely bit of padding for me wallet, and a nice change of pace from the usual viagravation I find there. *snerk* All in all, it was a nice birthday. :)
Happy Thursday, you sexy people!
Posted by phlegmfatale at 12:01 AM

I'm glad you had such a good Birfday. Thanks for the report onthe Chicken Fried Bacon.

The Texas Hall of State is my favorite Fair Park edifice. For me, entering is like entering the holiest of holy Texas edifices. I am awed in there even more than the Capitol bldg.

Glad you had fun on your special day!

And that the chicken-fried bacon lived up to your expectations...

Poor Wilbur! No Charlotte for HIM.

I'm glad Your Day went well, Phlegmmy! As for the Art Deco stuff... I love it and I hope you'll post more pics of same, soon.

My all-time fave Art Deco building is the Hoover factory/building in London... and if you've been up and down the A40 (which I know you have), you've seen it, too. I'm pleased to read (at the link) the building has been preserved and restored... rather than being torn down, which is the case much more often!

I had no idea about the proliferation of art deco buildings in your area. That must be a glorious site to see.

So glad your birthday was lovely and that the chicken-fried bacon never got logy.

holly - thanks! it was lovely.

Roberta X - Thank you so much! I had a really good day.

Christina - I'm so glad you called me - it was great to hear your voice on my birthday!

buck - more coming up on Friday's post, and keep your eyes on the Dallas Diorama for more Fair Park pics. Hoover bldg is awesome! Lurve it. I also really like Battersea Power Station -kewlness!

barbara - Ees true! We are rich in our local fairgrounds, indeed. the buildings are all beautiful and impeccably maintained. Yup, that bacon was teh ossum!

Phlegmmy, believe me...it was MY pleasure!

Happy Birthday (late!) I/we don't go out at night much..