...So where were we? AH! The South was just about to throw a wobbler and it's all fixin' to get really ugly. 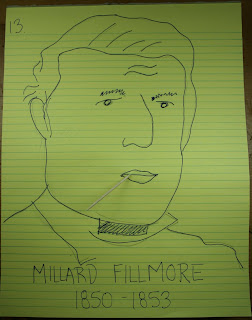 There's no telling what amount of ass-kickery Zachary Taylor would've gotten up to, even if he was a little back-and-forth on the whole slavery question. Since Fillmore was veep, he wasn't elected, but I thought he deserved an obligatory toothpick shot like all the rest. If things were bad for Taylor, they were a hot mess for Fillmore. Tried to straddle the fence with the new territory, letting some be free- and some slave- states, thus pleasing no-one. His urges to the factions to compromise only served to further inflame passions. When the Library of Congress burned in 1851, Fillmore joined the bucket brigade and carried water. Try not to hold against him that my rendering looks like the love child of Donald Trump and Marlon Brando. 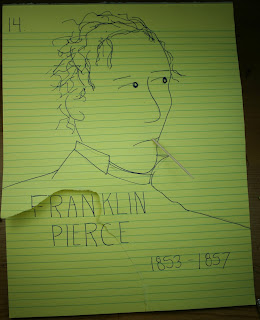 Nicknamed Handsome Frank, Pierce looked good with or without a toothpick. A lawyer, Pierce was warm, outgoing and liked people, and never wanted to be a politician. However, Pierce was unanimously nominated by the Democrats as their presidential candidate. Tragically, his one surviving son was killed in a railroad accident just before he took office, and this plunged the alcoholic Franklin to a permanently in-his-cups state. He was well-meaning and honest, but also considered a weak president. I think this is the saddest thing about this project - seeing these little slices of life that humanize the men who have served in this office. It's easy to imagine that the rigors of the task of the presidency were made more odious by the fresh wound of the loss of a son. Franklin did not support slavery, but did not always oppose it, either. He did manage to buy parts of Arizona and New Mexico from Mexico, two of my favorite states, so his presidency wasn't a total wash. He also tried to buy Cuba from Spain. Drunk shopping: don't do it. 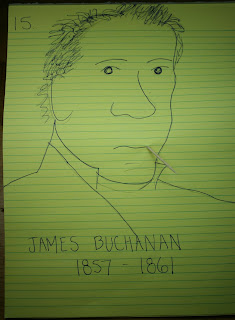 Old Buck was respected as a diplomat and politician, but is commonly thought of as one of the very worst US presidents. Though he doesn't look like it in my rendition, he looked like Anthony Hopkins. Anthony could make him more sympathetic, I'll bet. Buchanan had just arrived from lengthy work overseas in diplomacy, so he was the obvious choice for nominee, not having been embroiled in one side or other of the slavery issue that had been raging back home. I'm thinking just like the previous few presidents, this is a rock-and-a-hard-place job to fill at this moment in American history. The Panic of 1857 contributed to the ill feeling between the North and the South, and by then the Union was a slippery slope on which little footing might be gained. As the Southern states started to secede, Buchanan did nothing to stop them and preserve the Union. I'm thinking incidents like Harper's Ferry and the like had Old Buck graduating the toothpick to the woodblock to bite down on.

Believe it or not, Abe was the hardest one to draw so far, so I drew Tom Hanks and put the wonky beardy action on. Quite crap, really, but you should see the first 3 rejects 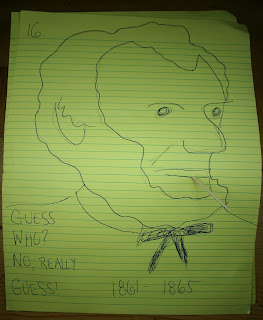 . Spent more time trying to draw him than the past 10 presidents combined. Jeez! Maybe it's because he's so familiar and we have such a picture of him in our minds that it's almost too close or something. Oh, I just realized I forgot his mole. Oh well- imagine it there. Anyway, my first efforts were looking like a Planet of the Apes reject. I love that he appears to be the first(?) (only?) president to wear the down-market Colonel Sanders ribbon-style tie, which, as everyone knows, is the mullet of cravats*.

About the thigh thing-- Billy Green, a friend of Lincoln's from the Illinois frontier town of New Salem said this: ''His thighs were as perfect as a human being could be.''
Uh, okay.


But enough about the decorative bits: on to Abe's toothpick quotient. He was born in a 3 sided shack. After that, any thing's possible. Lincoln was immensely talented, and interested in a great many things. His writing and speeches show a benevolent sort of bemused sadness overriding everything. He tried many trades, was a rail splitter, opened a store, and finally managed to become a lawyer, and all of this with only one year of formal education. His parents were illiterate, and when his mother died, his father married another illiterate woman who happened to have a few books, including a bible and some Shakespeare. Most of what Lincoln knew was self-taught, and his abiding intelligence was obviously very complimented by his impeccable instincts, so long as you don't count his choice of theatrical productions. During the war, he managed to find military leaders who would execute the war in the way he felt it should be done. He is said to have cried whenever he received reports of casualties. Before the war, Southerners viewed Lincoln as an enemy because he wasn't sympathetic to their issues. Lincoln, on the other hand, knew the foremost issue was to preserve the union at any cost. Lincoln was assassinated five days after Lee's surrender.

At least, I think I'm right about that. Y'all tell me if you see anything major I goofed on - some of these guys are kind of running together. I only have so much room in my brain for new information, and sometimes, the new stuff pushes the old out the other side.

*This is a compliment to mullets, rather than a slight to the tie. I personally like this tie. I wore one like this in marching band.
Posted by phlegmfatale at 12:01 AM

I like Franklin Pierce, he looks sort of pensive, and his toothpick looks depressed.

(HA! I almost typed "sot" instead of "sort", that would have been quite appropriate.)

Millard also was such a GOOD Prez San Franciscans namedtheir premier Music venue after him!

Frank P.- ROWR based on your pic. WHY am I always drawn to the tragic ons?

I abso LURVE that you refer to the recent unpleasantness with our Northern neighbors with the PROPER descriptor as "the War of Northern Agression."
Just think IF the South had prevailed...we wouldn't have to worry about Obama, Pelosi, Barney Frank or any other of the Northern or Western nincompoops of today!

Too bad Frank missed the QVC on Cuba, we couldda had some good rum and stogies, and avoided a lot of communard unpleasantness.

"Drunk shopping: dont do it"

Love your choice of "canvas". Srsly its hard to portray a likeness with such simple lines.
Excuse me ma'am but your genius is showing..
Wha happan to the lower left corner of that one dude?

Loving the toothpick posts so far, but the Lincoln/thigh comment has freaked me out!!!!