I listed an article on ebay by an artist who was popular in the 50s and 60s. Her naive style and humble craft was very much of that moment. She'd been a student of Miro, and Miro's influence can be seen in the lines of her work. 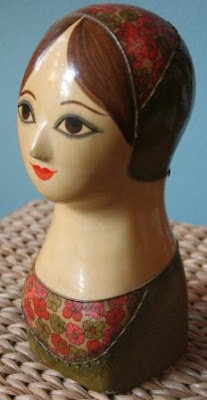 She was Italian and moved to Mexico in the 50s in her heyday, when Neiman Marcus and the like started mass-marketing her work. She married a man who on rare occasions collaborated with her on her finished pieces.

Well, this piece I listed is signed by both husband and wife, and somewhere I read that was a real rarity and more collectible, for some reason. Okay. Whatevs. I started it at a sort of modest price (well under $100) and noticed that although there are no bids, there are an awful lot of watchers.
Hmm
I searched ebay for other items by this artist, but they would sell in the $150 range. Okay.

Tonight I googled her husband for the first time, and found a) he carved the bird for the film The Maltese Falcon, b) he molested his daughters (ew!) and c) has been speculated to have been involved in the Black Dahlia murder, in addition to other crimes.

Funny thing was that I was reading along on the site I chased a link to, and thought -COOL! This thing was made in part by the guy who carved the Maltese Falcon! Mebbe I oughta keep it!

Then I read the other stuff and thought mebbe I oughta burn it. Ew.

I'll let the highest bidder decide what to do with it.
Posted by phlegmfatale at 12:01 AM

No link to the auction???