THE TOOTHPICK TEST
BY PHLEGMFATALE
OCTOBER 2008

If you can fog a mirror, you must have noticed we are again in the throes of a hotly contested presidential race in the USA. By virtually every avenue of media, we are bombarded with information of this season's candidates ranging from their plans and policies to the frivolous minutiae of whether next season will favor lower or higher hemlines and what's their favorite color.
For a bit more than half my life, I have been a registered voter and have followed with interest the previous six major elections. During those 24 years, I have noticed the media play human interest stories predicting the top dog may be divined by which candidate is taller or which has a greater preponderance of blue blood in their ancestry, or various other equally scientific methods.
I have made my own observations and have reached a startling conclusion with regards to the winner of the presidential race: the winning candidate will be the one who looks most natural with a toothpick sticking out of his mouth, hence The Toothpick Test. I know it sounds nutty, but just bear with me. Over the next week, I'll be posting some illustrations and facts to buttress my postulate. I'm certain I'm right about this and next Monday I'll predict who the winner will be of the 2008 presidential election, of that I am certain. Well, pretty certain. I think. Kinda. Sorta. 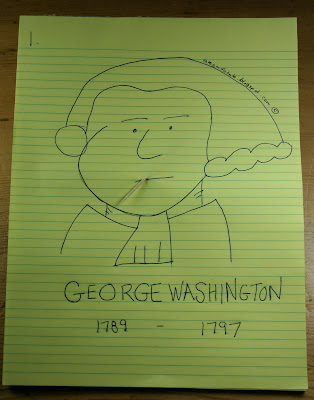 President #1 George Washington, unopposed
I love the story that he had wooden teeth. Alas, that story is untrue - for he had dentures carved of rhino ivory and apparently he didn't often smile due to the discomfort. But it would have been a toothsome irony if they'd been carved, say, of applewood, yeah? Fortunately, George was a brilliant man who was not one to let denture discomfort distract him from the business of establishing this democracy in such a way that it be perpetuated and safe from turning into yet another monarchy or some other yucky-archy. He set up his cabinet of advisors which is an executive branch tradition to this day. Plus he was a military guy, and military guys look good with a toothpick. S'true. 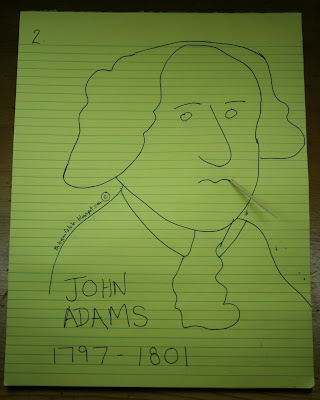 President #2 John Adams 1797-1801 Ran against Thomas Jefferson
I know what you're thinking: we've hit a wrinkle already. You've seen a two dollar bill and you therefore know Thomas Jefferson was a president, and so this thing about the toothpick already has the wheels falling off. Well, not so fast, sunshine. Adams was nicknamed "his rotundity," and apparently knew his way around a dinner plate, a trifle dish, a compote, aspic trays, buffets and whatnot. It's no stretch to envision someone called "his rotundity" walking about with a toothpick in his mouth, is it? Srsly. Oh, and back then, the practice was that the runner-up in the election would be the Vice-President, so there was lots of bad blood between Adams and Jefferson which led to... 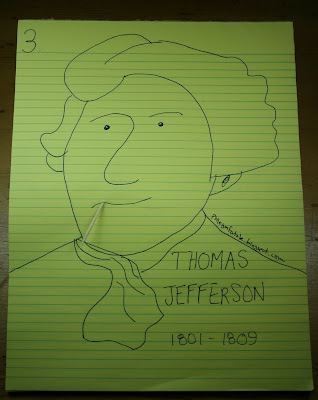 President #3 Thomas Jefferson 1801 - 1809 Ran against Aaron Burr in 1801, and George Clinton of Parliament Funkadelic in 1805, each serving as his Veep
Speaking of the buffet, the buffet became the rage in Europe in the eighteenth century, and Jefferson had spent a lot of time in France, and some have suggested he introduced the practice to American society upon his return. Buffet = total toothpick. You know how back in the day when a conscious patient was having a slug dug out or a limb amputated and they'd give him a piece of wood to bite down on? Well, the toothpick thing also stands up here because TJ needed the buffer between his pearly whites after four years of gritting them puppies as Adams' Veep. By that time, Jefferson looked way more natural with a toothpick than did Adams. Adams was so steamed by TJ's election, he left town the night before the inauguration. Incidentally, after their lifelong feud, TJ and Adams died on the same day (July 4, 1826, 50 years after the signing of the Constitution). Adams last words were "Jefferson is still alive" and he did not know TJ had died earlier the same day. Jefferson sold his collection of books to the US Congress for money to pay his debts off, and this became the foundation of the Library of Congress. [I wonder if they'd buy my old Nancy Drew books so I could pay off my shoe bill?] Jefferson was a fascinating person, but we should give him his propers for being a very smart shopper, what with him picking up Napoleon's fire-sale castoffs in the form of one Louisiana Purchase. Way to go, TJ. We love a bargain. But we'd like to sell NOLA back to the French. I'm sure we can come to some sort of arrangement. 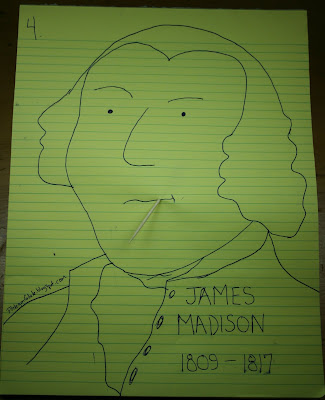 President #4 James Madison 1809-1817 Veep John Adams
James was a brilliant man, a master of languages, and lived a long life despite poor health. He stood just 5'4" and never broke 100 pounds. Think horse jockey. What could look more natural than a jockey with a toothpick in his mouth? We love Madison because he came up with a lot of the ideas behind the US Constitution. James probably felt a little cocky, too, because he landed such a fabulous catch in the form of one Dolley, who is widely regarded as one of the most charming and admired of all US First Ladies. Dolley's cupcakes were very popular in school lunches when I was a kid.

This concludes the first gripping installment of my Toothpick Test series. I hope you were as entertained as I was by compiling this information. This is intended as a light-hearted sashay through the history of presidential elections. Every moment in the life of a democracy is an important one, and we never can afford the luxury of inattention to the pressing questions of the day. Still, it is comforting to know that even the very brilliant men who founded this great nation had at times violent differences of opinion. If they moved forward and pressed on in spite of those differences, then perhaps we can today, as well. Whoever wins the election a week from tomorrow night, when the sun rises on Wednesday, we still all will be Americans. I think that's a pretty amazing place to start.
Posted by phlegmfatale at 12:01 AM

I'm speechless. Who knew that toothpicks could have such political implications?
Your presidential portraits reveal a certain smug self-satisfaction...the kind one feels as one is digging the remnants of one's enemies from between one's teeth...:)

christina - humble beginnings, and whatnot. I love your analysis of the smugness - you really get me, don't you? Love ya, babe!

hahaha! I love this!

I await the next episode in this fascinating history...entertainment and education together...lucky us.

Fabulous post! I especially loved TJ and Madison.
And I agree, let's give NOLA back to the Frogs. We could always call it a "Present" for all their "Help" hrough the recent conflicts. Or for leaving us the boondoggle that was Vietnam.

LURVE the art! And I can't wait to see FDR with a toothpick hanging out of his mouf...

(the exception that proves the rule?)

breda - wow! Thanks! ASuch a compliment from a lieberrian! woohoo!

thud - aw, shucks! Glad you enjoyed it. It's actually fun to take a lighthearted look at things, for a change.

hollyb - Yeah, TJ and Madison were really at loggerheads. Yup, we don't need no NOLA.

buck - There will be a couple exceptions that prove the rule, actually. Teddy's the one I'm excited about. ROWR!

But of course! Why nobody pinpointed this prior to now is beyond me, but it seems to me just as telling an indicator as any other. Well done, you.

barbara - perzackley - it's so fundamental! Thanks!