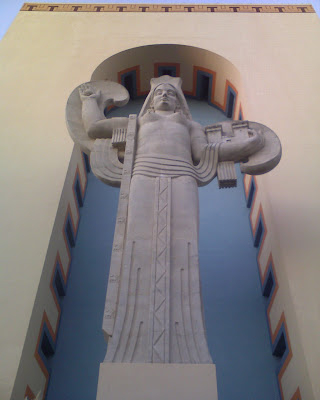 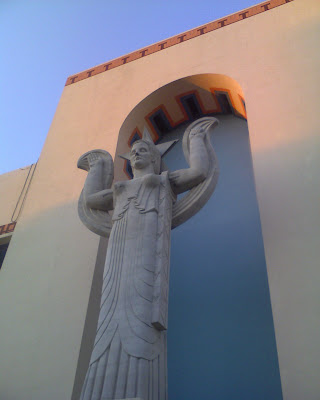 For Buck, more images of the Beaux Arts deco structures at Dallas' Fair Park. The Parry Entrance Esplanade is lined by facades featuring six of these stone-hearted giantesses, each representative of one nation which ruled over Texas. I think that first heifer is Phonecian, and yet that doesn't sound right. These Amazons give each other the big-eye across a reflecting pool that is 700 feet long, by the way. Kinda neat.
Note the murals in the recessed areas. The murals are very like the socialist propaganda of that era in style, if you ask me, even if the inspiration was otherwise. So, they didn't get they pitcher took. 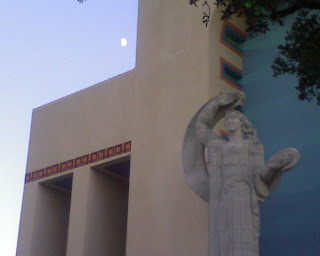 The 1961 Ann-Margret film State Fair was filmed at Fair Park. This is the only pre-1950 US fairground still completely intact, still having its original marbles. I think you can clicky the pictures to embiggenate.

I may go back to the State Fair one day next week. I didn't make it into the food building, so I didn't get to see the butter sculpture. It's always fun to see the creative arts building, too, because it has all the fiber arts prizewinners, including lots 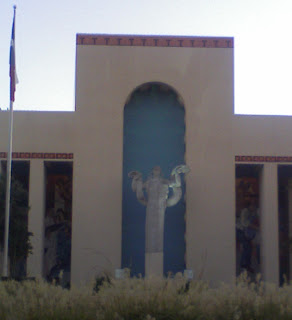 of fabulous quilts and sculptures and things by little kids. Fun stuff.

Oh, I never told you, but the boy dog is named Chuy. That's pronounced like chewy. Sorry, but I don't watch tv so I won't be bothered by thoughts of Chelsea Handler's sidekick, so I'll thank you not to bring him up. Chuy's seeming to me like he'll be considerably smaller than Praline. I should have named him Sawed-Off, which could tastily double for sod-off.

At lunch yesterday, I came home and sat in the yard with the pups as they lolled about in the sunshine and wallowed in the dirt. It was really cute. I was not quite ready, though, for the 11 week old boy to start humping his sissy. Wow. Having a boy dog is going to be interesting.

If I had Praline to name over again, her name would be Ginsu Girlie, she of the razor tooth. I call her Ginsu anyway. It's her first nickname. They're settling into a nice play style with each other, which is a relief. I worried she'd always be too rough on him, but he's really holding his own. He's picking lots of fights, too, so I think he's digging it. I leave their kennel doors open so they can go take naps when they like. I came into the living room a couple days ago, and she was asleep in his kennel, and he was asleep in hers. Sweet!

Great pics of some stunning architecture.
Perhaps you were being tongue in cheek, BUT State Fair was a Pat Boone moving co starring Tom Ewell and Pamela Tiffin. Ann was very low on the Star totem pole at that time.
I'm just sayin'. And no, as a matter of fact I DIDN'T look that up on IMdB. Did it from memory.

Ah, but Ann-Margret DID stand in the window in her slip as a shirtless Pat Boone unctuously sang "Willing and Eager" *paroxysms! GACK!* to her in the cool evening breeze. Lawks!
I didn't learn that on IMDB, tho-- I learned that on YOOTOOB, and I may never recover. *shudder*

Thanks for that, Phlegmmy... MOST appreciated, and the pics are every bit as good as I thought they would be. The Texas State Fair Grounds are yet another add to the "to-do" list.

Hey... I saw "State Fair" in a theatre, believe it or don't. I don't remember anything about it, except for the title song... which was quite catchy, in that '50s sorta way.

buck - Glad you liked the pics. It is an impressive collection of buildings, to say the least. State Fair is not my kind of movie.

Shouldn't there be a pic between photo 2 and photo 3, in which the goddess figure spells out a letter M? And has her arms down to her sides at 30 degree angles from her body for photo #4?

matt g - so THAT's why they had the construction worker chick statue!!!

The Parry entrance...that's a family name I am familar with.
As I write, V2 is on V1's bed and vice versa...they seem to sort it out by their real bedtime though :)