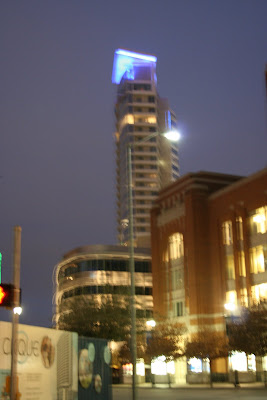 Well, my girlfriend had to cancel our karaoke date, so she asked me to come over to her house Friday night instead for a big poker game. I've played Texas Hold 'Em quite a bit online, but I've never played poker with live humans. Eek. Either I'll be amazing, or I'll be abysmal. I don't expect a middling performance from myself.

Now I'm reading Streets of Laredo by Larry McMurtry, sequel to Lonesome Dove. McMurtry writes so brilliantly about women that I suspect he's actually listened to a woman once or twice in his life.

I had lunch Thursday with a friend at a restaurant in the Trammell Crow Center downtown. Fancy place, that. Actually, I don't believe I've ever eaten a meal in a skyscraper, before. There's something odd about 40-odd stories of humans stacked on top of the floor you're in. The food was amazing, though, when I could stop thinking of all the humans I was holding up. Herculean burdens, and the women who wield them...
Posted by phlegmfatale at 11:48 PM

Oooh, I thought you were on top of all the human layers - you were underneath and eating? The thought is going to turn me off of going to the lower levels of tall buildings for a while.... Glad I live in a little berg where the tallest building is 6 or 7 stories.

You need a monopod like I just bought...it would probably slip into your purse and steady these night shots for you.

Dow! He's got a monopod in his pants. Sorry, I just had to go there. And remember that line from As Good As It Gets, when a girl asks Jack how he's able to write women so well. He says something like "It's easy. First you write a man, then you take away reason and accountability." I know, but it's funny. Did you ever eat up in the Reunion Tower restaurant, or the similar tower in San Antonio? That's a fun time.

Shame about the cancelation. Hope you didn't rehearse too much.

It must be great being able to sing anything like you. I have to pick my songs to fit my limited vocal skills.

Tonight, I'm going to be Jackie Wilson singing, 'Higher and Higher'. I'll be attempting the falsetto bit without the aid of a safety net.
I'll sound more like Jocky Wilson.
I'll do it anyway.

No Fear. No pity.