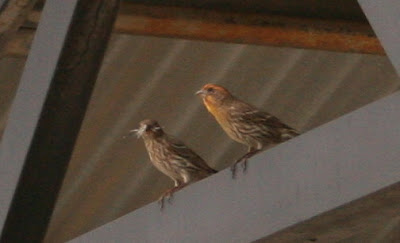 I was piddling around with my camera on Thursday, taking pictures of flowers, when I saw this pretty little pair of birds. I don't know what type of finch this is, but they were a dandy little pair. I think the female has a bit of fuzz in her beak for nest-building, but I'm guessing. Maybe she felt like wearin 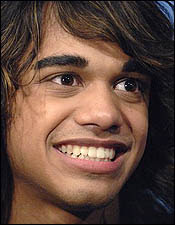 g a fancy hat that day.

And speaking of personal adornment, can we talk about the grooming of the male of our sp 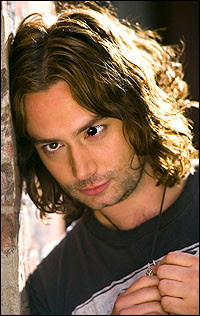 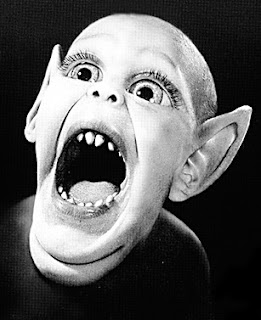 OK, if men insist on imitating the grooming of women, then at least get it right, ok? I'm talking about the epidemic of young men who are over-plucking or over-waxing the eyebrow area.
Sanjaya on American Idleness is a prime example. Note the bold black furry caterpillars above his eyes. What in those dense forests of manhood could possibly indicate such an abrupt terminus between the brows, leaving a gap so wide one could dry-dock a 747 thereon? I think he's rapidly hurtling toward Xerxes territory, if you know what I mean. Anyway, the growth is so dense that to have such a clean field between the two brows looks utterly unnatural. Then again, if he looked like his natural mono-browed self, the little girls might be crying for another reason.
For all his onanistic prancing onstage, at least Constantine Maroulis didn't over-shoot the brow runway by a mile, and he was a hairy dude. Actually, his brows look nice and may actually be the one aspect of his physiognomy which wasn't over-thunk to a repellent degree.
Quite a few young men I'm seeing about town look like they've been tweezed into oblivion, and frankly, this disturbs me. By all means, mow the thatches of reeds that come bursting forth from ears and nostrils (heads-up, dentists!), and even trim or pluck the two-inchers that rear their heads from the field of the brow and flap boisterously in the wind. But try to look a little less girly. Really. I think I speak for all the gals when I say that you need to be gentlemen and step back and allow us to be the pretty ones.
Posted by phlegmfatale at 10:48 PM

I shave a 1/2in wide swath between my eyebrows but I have one wild hair that sicks out fo the left one.

I leave it there to drive everyone crazy.

THANK you, Phlegmmy!
I don't get this "metrosexual" thing. I want a man who's a real man, but is very clean! Or is that impossible to ask...

Yikes, the eye-thatch needs thinning, but not with a weedwhacker, however Indians of the Asian sub-continent are known for their hiresutedness, and for women with the same issues they have a whole special beauty-product line...

I am convinced Sanjaya is shooting for Bollywood.

Well, I don't know about the little Girl-Bird in youe pic, but the ones in our area were positively ectastic the day I gave Miss Boo her Haircut last month. They had so much warm, soft, nesting material to use, that their little hatchlings will be nice and toasty til their feathers sprout out.
As for thos boychicks...I was gonna opine they shave between their eyebrows. It just looks too straight and neat to be anything else. And we all know they are way too cowardly to submit to waxing. Only REAL women are brave enough for that!

I keep tellin my barber to let the eyebrows get bushy, like Brezhnev, but she won't have it. Those pictures scare the hell outa me. Nice.

We were in the big city over the weekend, and had to go to "Really Snooty Shopping Mall" to get to the Apple Store.

Holy smokes! I don't think I've ever seen as many tweezed, tanned and tailored dudes in one place at one time before! LOL

And you think women are doing a better job? You know for every woman (or man, I guess) who gets her eyebrows right, there is another one who looks like Ming the Merciless in drag. Eyebrow pluckage and waxage is unnatural in and of itself. If you are too hideous without pluckage (man or woman), then you should not mate, thereby breeding hideous eyebrows out of our species. Come on folks, now that we understand how evolution works - when are we gonna start exploiting it?

Is that last picture Phil from American Idol? The similarities are remarkable.

Rita, do men in the US wax their legs? There are a few that do that over here, and now some professional rugby players wear... eye liners!... during their games!!!! Eye liners.

There was one MP that used to do that, too, but he's totally whacked out we didn't worry much until a couple of rugby players commented on their oppositions' grooming.