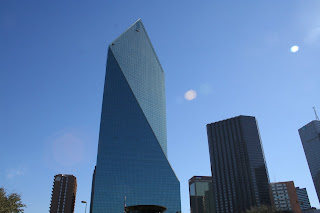 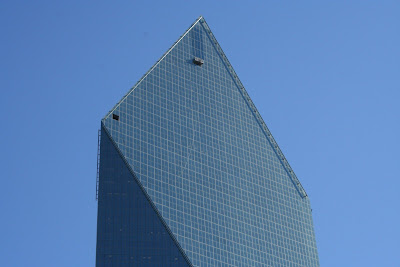 This huge building downtown was designed by noted architect I. M. Pei.

Monday morning - I barely remembered to bring my camera, but I was so happy I did when I saw these window washers at the top of the building, just starting on their task. I'd guess this is about a 60 floor building. Can you see the line of cable sweeping down from the window-washer trapeze and connecting the open window about 15 floors below? Anyway - with its kooky angles, this one's a real engineering challenge to clean, I'll bet.

Since I've been in school for more than a month, there's been almost no cooking going on in our house. We've existed on sammies, salads and oatmeal and cereal. We really haven't had loads of time to contemplate the state of the refrigerator or its contents. Something, however, was rearing its furry little head and making its presence known. We noticed a pungent emanation from the fridge every time we opened it in recent weeks. Husband finally ferreted out the culprit yesterday. (I at first spelled that "yeasterday.")

The new life form was a little tub of Philly cream cheese, sell-by dated October-ish. Anyway - husband told me about it, and I said "a ha." Makes sense.

Later I was going through the mammoth pile of junk mail, sorting good from bad, shred from tossers, and I left the trash bin by the table, sitting on the floor.

Before I left for work Monday morning, I noticed the bin was pushed over, but I didn't think anything of it - there seemed to be nothing but the junk mail on top and just slightly spilling out the edge. I picked the bin up and sat it on the kitchen counter, out of reach of curious paws and whiskers.

Monday night, home from work, the house smelled - garsh- assy was the first thing that came to mind. Beastly. Foul. VILE. We looked the place over from stem to stern and found no eruption sites that we could identify. In the living room, I found it: the spotlessly clean cream cheese container. Bitch ate the whole thing. Apparently the eye-wateringly nasty odor was her gas.
I hope my dog doesn't die in the night. If she had a choice of which way to go, she probably would choose to die from eating something spectacuarly flavorful like rancid old cream cheese. Better than getting run over by a mack truck, I suppose.

Sometimes I think she's such a clever girl, but moments like these teach me that she's just a dim little bulb. I see her staring up at me these days, and I am less able to deny that adorably blank face with expressive ears and warm, moist eyes is indicative not of inate intelligence and 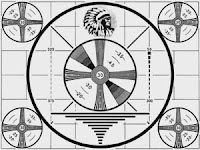 a ponderous view of the world, but of a more bovine variety of stupefaction. In recent times, I've come to know she is just a tiny cow, willing to be made burgers of - she's simply more nimble and portable. Inside her brain is that old Indian head test screen they broadcast on off-the-air tv stations back in the day. Her conscious brain has an information loop of about 1.5 seconds' retention. And me? Even after 15 years I'm like the beaming new parent who doesn't see their baby looks like a shar pei or something from the Island of Dr. Moreau. She's mine, she's beautiful, and she's smart, dammit!

Now she's curled up at my feet, happy as a clam, apparently. We'll see... All I know is, her gassy ass won't be under mama's covers tonight.
Posted by phlegmfatale at 10:06 PM

You've known that puppy for 15 years and you left the cream cheese within her domain? It ain't HER fault the house was smelly! ;-)

At least the weather's nice right now, so you can open a window. (Don't throw the puppy through it! ;-)

This is why we have a LID on our trash can. It's worth the extra effort required to make deposits. I got it at Bed,Bath and Beyond for $3 b/c the bottom had a crack in it. I abso LOVE their clearance section. Stoopid Yups! I'll take their damaged, discounted goods and RUN right out the store w/ them.

"Bovine stupefaction", yer killin' me. Hilarious. They may be loverly, may be our little babies, but they're just critters after all.

I can't imagine anything worse than moldy cheese, dog fart and then eventually dog diarrhea. I hope she doesn't get sick.

THe window washers are making me nauseaus just looking at them:)

g bro - not to worry: there'll be no throwing of the dog through the window!

hollyb - no lid on any trash can could keep the doglet out - she's fierce. She's an animal. She's a maniac. Husband says we're just alike, but I dunno.

fathairybastard - Glad you enjoyed it! Yup, them's our babies. And that building IS really cool - I've always marveled at the window washers up there, because of all the non-vertical planes intersecting. Coolness.

becky - So far, so good. She peed a lake in the living room, but otherwise, she seems fine. :)

Great photo! You could not offer me a salary large enough to dangle from a rope at those heights.

dave - Thanks - high praise from a brilliant photog like yourself. And I'm with you - no amount of money, at no time, never. Was that a triple-negative, or what?!!!