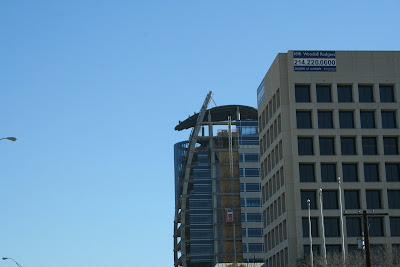 Here's a photo from Monday of some guys working on a roof - probably 20 - ish floors up. Those three little bumps on the leading edge of that curved surface are people. Sickening!

I'm on a yahoo group in which someone posted an appalling racist rant recently.

My heart went out to her. I want to do an intervention. The grammar and spelling were atrocious. By atrocious, I don't mean simply the garden-variety typos or the kind of errors one makes in a hurry. OK - I'll give you a sample sentence from the harangue:

NO one wants another bar down herethat caters to drunk [intercoursing]
[ethnic group] that solve thier problems withguns and knives!

Well, ok - this wasn't SUCH a poorly constructed sentence, but it is typical of the flavor of the post. What makes this whole thing such jolly good fun for me is that although he hails not from the ethnic group being vilified here, her husband is of foreign extraction.

Anyone besides me notice that the runaway bride from 2 years ago looks a lot like that kooky astronaut stalker chick?
Posted by phlegmfatale at 6:28 AM

I'm a little bit racist. So is my husband. It's an interesting competition when political correctness is cast aside.

Kelly and I drove by that building the Saturday evening on the way to Dad's place. Some interesting architecture going on with that one.
Me likes it.

It's easy to think that those sorts of outbursts go along with the bad spelling and grammar, but there's a hell of a lot of literate bigots out there, and some nice folks that can't spell to save their life (guilty). I have a few cousins who bust out with the "N" word from time to time in a hateful way. What are ya gonna do? Can't control what other people do.

Well she obviously doesn't know her ethnic groups very well! Harumph!
A TRUE Bigot knows that only the illegals from the Southern part of N. America or Central America use knives [b/c they are too poor/ignorant to use guns]. Your darker ethnicities, now they are fonder of using guns to solve their problems, probably as a way to show THE MAN that they are just as good as HE is! [/sarcasm off; just in case anyone thought I meant any of that bushwa!]

Yeah, my wife and I noticed. So does that Michigan guy that dismembered his wife.

What we want to know is, what causes that and how do we avoid it?