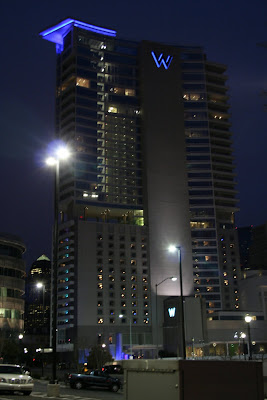 Here's another shot of the W Hotel taken the same night as the previous picture I showed a couple days ago. The camera was hand-held in this photo, too, but a bit more steady. The truth is, I like the look of the blue neon when it's blurry - I think it's prettier that way. In fact, I think few things we perceive as "pretty" in life will stand up to the harsh light of close inspection-- sometimes a little fuzzy mystery adds to the appeal. Think of it as facing life with a beer-goggles approach: better the nice idea than the bad reality. Just remember to keep those beer-googles well-primed.

I've been feeling guilty about my blog, lately, as I've not regaled you with some of the madcap stuff to which I am privy. I realize for too long I have deprived you of white trash tales of terror from distant relatives, so here goes with one particularly vivid story. I hope you will appreciate this, as it is absolutely true and not gleaned from a Jerry Springer episode.

My first cousin Jay married a vile creature named Charlene in the 70s. If I remember correctly, Charlene is one of about a dozen children born to a wily, strange pair of hicks who probably never had a full set of teeth between them. Charlene had no more joined our family than she was busy trying to pick fights with my grandmother. Classy.

Charlene is a harsh, strange little creature. Her hair is dark and hangs limp around her pale, pinched face. Her eyes have the pig-like effect of glossy black buttons punched into a potato. In my earliest memories, I recall her in the full bloom of pregancy, resplendent in a raspberry pair of bell-bottomed maternity pants, chain-smoking and berating my poor cousin Jay who seemed helpless to defend himself against her constant harangues. Now that's multi-tasking when you can chainsmoke, be a shrieking harpy and make a baby all at once. From their loins sprang 3 children who had the grave misfortune of taking after their mother.

Throughout the years, it was widely known in their small town that Charlene had affairs with local ne'er-do-wells. Eventually, word of this got around to Jay, who was very beaten-down by this entire situation. I suspect Jay never confronted Charlene.

About 5 years ago and after about 25 years of marriage, one of their children found a video tape in the VCR of Charlene engaging in amorous activities with a man who was not their father. Jay came home and they showed him the video, and he was devastated. Charlene came in later and he confronted her with the evidence. Like the brazen hussy she is, Charlene shrugged the video off by saying that video was very old, having been made a long time earlier(as if that made it ok).

Rather than wait for their father to respond, one of their children jumped into the fray and said "Nuh-unh, mom, you shot that with that tripod you bought last week! We didn't have a tripod before then." He also pointed out that the date was on the video tape.

Having been so crassly confronted by evidence of her faithlessness, Jay had no choice but to face facts and accept that his marriage was over.

Jay does very hard work in the outdoors, a physically grueling job, and his face is heartbreaking to behold, looking about 25 years older than he is. Lines of worry and care traverse his face like the crevices of a canyon, and he has the look of someone for whom nothing has ever gone quite right-- someone who has never once caught a lucky break. If Jad had a home where he was nurtured and supported instead of treated so badly, I think he wouldn't have been so careworn and beaten down by the world.

I wonder how he came to be susceptible to Charlene's reptilian charms, because his spirit seems one far too fragile to bear up under such abuse? My heart goes out to him, but you really can't fix a life gone wrong for someone else. Kinda funny, but very sad and very bizarre.
Posted by phlegmfatale at 12:38 AM

That's is sooo sad. But it's good that his kids were willing to help his "face facts". Here's hoping he keeps everything AND the kids in the divorce.

Wonder how the kids will feel in later years when they realize they helped the breakup?

Mushy, they will be happy that their father got at least a few years away from that pathetic, windbag skank. Charlene's parents needed to be spayed and neutered, real humdingers that bunch... let us pray. A

I've known a few charlenes. They are all the same...Poor Jay.

The kids, knowing what was going on, might have been rooting for their dad to do something, ya think? Drama. Well, there's always someone elses life to look at to make you feel that your own isn't really all that sordid after all.

You just know those kids are going to have issues with sex their whole lives.

What a nightmare, I hope the kids turn out ok ... and your cousin for that matter.