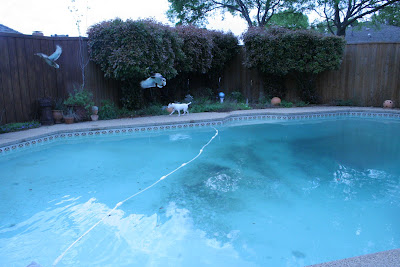 OK, I posted this image over at Diorama today, but I liked this one enough to post it here, too. This pair of mallards has been hanging around my dirty pool, paddling about and generally keeping my little doglet all lathered up. This is one of the last in a series in which doglet goes all the way around the pool and tries to sneak up on the ducks, who were onto her all along.

I can't believe Chris Sligh fell off his game on American Idol the past couple weeks. He's technically such a good singer. Perhaps it's just too wearing for him to keep up the whole facade-- he's much more clever than the average bear. Wit is a rare commodity on that show. I also thought the guy who did the Cure song was way worse than Chris.

I also read in several places on the net that Gwen Stefani was incensed at the idea of Sanjaya singing a No Doubt song. I don't blame her-- he's the entertainment equivalent of a piece of burned toast sitting on a plate for a day, soggy. Ew. And all the while he looks so pleased with himself, too.

Lakisha and Melinda are great on that show, but they are starting to bore me, a little. Paula on Tuesday night? Yo, dawg-- that wasn't working for me. It was just okay.

Top Design is fairly exciting. I was pleased they sent that whiny boy home last week, but I was very sorry to see Goil go - he was so good-natured, and I liked his red hotel room. Carisa is a pain in the ass, but I think she does a good job and has a great design sensibility. WTF was up with Andrea's room this week? I thought they would send her home for sure. Oh well.
Posted by phlegmfatale at 12:55 AM

Dolittle is my favorite idol this year. She is a Diva in the making.

I wasn't too impressed with Goil's hotel room. He was my favorite too. But those patchwork walls were icky to me.

I like Goil but he's too high maintenance. Carissa is completely bonkers.

And the fuckers cancelled Rome.

Beware the Ides of March indeed.

Yep, with Lakisha and Melinda you can see what's coming from way back. They may not make it to the finale for that very reason.

We're getting the American Idol about a week after you, I think. This weekend we get to watch the final 11 perform. I really like Melinda, too. I hope she goes all the way.

Does Doglet swim, too? I'm just picturing her in the pool!

The post reminds me of why I'm so glad I don't have a pool anymore...such a pain!

Are you sure they're mallards, could they be Iranian gun boats on the look out for intruders of Iranian waters?

Not watchin' any of that stuff, but it's all over the news and I can't escape it. What's with that one dude and the mohawk? Looks like cold water. We had a pool back in the early 80s. It was awesome the first summer, but after that became such a pain that my folks sold the house and moved. It was fun while it lasted though, but it got to where I had to clean the thing each time I wanted to swim in it. A pain. Later I got used to going to Wet and Wild, getting a season pass and going once or twice a week for an hour or so. That turned out to be much better. Relax and let someone else clean the friggin' thing.