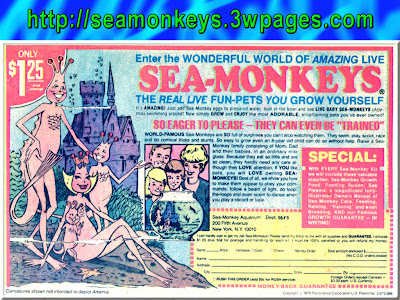 A study has found that male macaque monkeys "pay" for sex by grooming females. The article mentions that after having been groomed by a male, the female monkey is three times more likely to give up some monkey love to her personal nit-picker. The lady monkeys are savvy businesswomen for demanding payment up front. Of course, this has no significance with regard to humans, as the males grooming our females are the less likely than average to interfere with those females sexually. The other irony is that in human society, nit-pickers are far less likely to score with the opposite sex. It was ever thus.
____________________________ 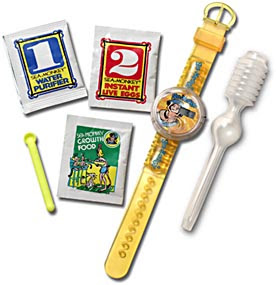 Comments on this post have prompted me to append this post with an additional note. Tickersoid wrote that seamonkeys were always at it with no grooming ritual required, thank you very much.

Well, when I was at univ ( about 10 years ago), I discovered the Seamonkey watch, and I wore mine to school rather frequently-- at least when I didn't have opera rehearsal and 16 hour school days. This watch has a removeable plastic bubble dome on the face, and you have a little mini-turkey-baster thingie and can suck up a couple seamonkeys from their little tank and inject them into the bubble and wear them around all day. (not recommended for sunny, outdoor wearing.) A pair of seamonkeys can live in the little bubble for 12 hours. Well, sitting in music theory lectures, I could watch my pets swimswim in circles. I rather fancied I was Bruce Dern in the Seamonkey version of Silent Running, the last remaining bubble of seamonkeydom nature was on my wrist, and I would never jettison it back into space, no matter what ground control said-- I was down for the count with my seamonkeys. Mostly, though, I watched them try to make baby seamonkeys - they were constantly hooking up. I'd say to someone "hey, look at my seamonkeys" and they'd say "I only see one-- oh, that's two, uh" and I'd be embarrassed that my seamonkeys were such exhibitionists, canoodling in public and whatnot. At the end of the day, I'd use the baster thingie to hoover them out of the bubble and re-introduce them to the general seamonkey population. Eventually, that batch of seamonkeys died, and I lost their biodome bubble from the watch anyway, and maybe, just for a second, got a little bored. (who, me? Lose interest? Look! A dragonfly!)

Thus ended my seamonkey career. Alas. But for a moment, it was beautiful.
Posted by phlegmfatale at 7:24 AM

Sea monkeys are 'at it' all the time in my experience. None of that Macaque messing about.

(In this space would have been several observations, that on re-reading, I have decided do not belong to the general public.... but you may consider them excellent, interesting, and quite revealing.
I erased them.)

Easier than flowers and candy I guess :-)

tickers - you are SO right. In fact, I need to do an addendum to this post re: seamonkeys

carteach - well, I erased about half of what I wrote in that post. Hmm. Maybe we made some of the same observations!

lin - Dorothy Parker said "Candy is dandy, but liquor is quicker." But she was an alkie, too, eh?

Hey, maybe that grooming thing was what the airplane hair stroker guy from a couple days ago was attempting!

I can personally attest that the nearest equivalent I tried (doing girl's homework for them) was highly unsuccessful. If only I had known to just be a dumb asshat jock!

....Good heavens, people actually bought sea monkeys? I'm amazed. Mom always claimed they were vermin and utterly refused. "Catch some more preying mantises instead. They're beneficial." It's true but they also bite; I preferred to gather the egg thingies in the fall. Do sea monkeys bite?

...I have long found grooming behavior a fun part of courtship but that's all I'm sayin' about that. Reticence an' mystery bein' the greater part of attractiveness an' all.

OTOH, havin' my hair washed and "styled" I count more as an endurance test than grooming -- I can hardly stand it. It's not the hairdressers, nearly all of whom have been pleasent men and/or women, it's the whole process. Yeeeech. And no matter what I tell them, they overdo the conditioner and it all goes flat a half hour later. I'd almost rather make out with a macaque, as long as it was of good family.

roberta x - Yup. I have bought sea monkeys more than once, and all since I crossed over into adulthood. Of course, your mum's right-- they're brine shrimp, actually - teeny weeny little shrimp. Mantids are glorious. I didn't know they bit? I'll agree with your grooming statement. My hair is really thick and I love having it pulled, actually. Isn't that corny? I do enjoy having it washed at the salon, though - find that relaxing. I'm glad to know you have high macaque standards. *whew!*

Sea monkeys are like men. If they only want to shag, their appeal flares and dies pretty quickly.

Never bought seamonkeys, though that ad you're showing brings back memories of reading comic books.

I think the whole macaque thing is unfair...the gal is providing dinner, too! Don't they eat the bugs they find?

Re: hair pulling...some clients like that as part of the scalp massage...you just wrap a small lock of hair around your index finger and tug.

I used to see those advers in all my comic books. when I found out they were brine shrimp I was disappointed. If I had only known they gave x rated shows...

You had sea monkeys? Wow, my mom always said that those intriguing ads were scams so that was that. I am envious! She wouldn't spring for those naughty x-ray vision glasses either.

One of my friends said she forgot to feed her sea monkeys and they turned cannibalistic. By the time she remembered, she said there was only one very large sea monkey left.

I used to be fascinated by those ads for "sea monkeys" in the backs of comics and then found out they were just brine shrimp. I'd toss a few in the aquarium and watch them scurry around till the guppies nabbed them. They had no time to make nasty with any others till they were history.

And I've never seen the watch, but the idea of you sitting in class and watching them make the beast with two backs is just hilarious. You kill me.