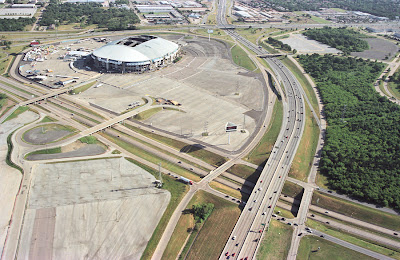 Now, I don't want to be mean, and I'm not making light of the pain and suffering of others, but I'm so glad that dad-burned football season is over for big teams centered in and around Dallas. Sunday afternoon I decided to go the shorter, more sensible route to my folks' house which involved a spot of travel on Loop 12. Well, waddayaknow if there wasn't a massive bottleneck of traffic involving people trying to exit to Texas Stadium in Irving? I get it. Y'all want to go to your game. Ok, alright already. But why must an 8-lane expressway come to a crawl? I could see the exiting lane, or even possibly two lanes moving more slowly and backing up, but *sheesh.*

And the backup started about 2 miles from the stadium and there was a haze of smoke around the parking lots surrounding the stadium. What do we have here? A bivouac of Civil War reenactors? Scores of jalopies that all made their death-crawl to the stadium one last time, giving up the ghosts in the parking lot, resplendent with throwed-rods and under-hood fires? Oh, no. Bubbas far and wide brought they grills and set up back-yard style cookout events. Whatever happened to a simple basket of goodies? Apparently there's nothing simple to it, anymore. At least I can respect the one guy I heard of who goes to NASCAR events with a margarita machine gerry-rigged with an under-sink garbage disposal for ice-crushing and mixing. Schlepping a grill out? Well, I don't know what to call that.

All the better for Dallas when the Cowboys move into their new stadium over at Arlington, and good rivets, as my baby sister used to say. Let the good folks of Arlington deal with the traffic snarls, the increased municipal taxes and the soused sport fans on their roadways.
Posted by phlegmfatale at 10:42 PM

Hubby and I are planning to go see a Nascar race later in the year and I'm already planning the drive into and out of the race to the highway. I'm sure all the time and effort I spend on this will be for naught.

I bet those Cowboy fan's were really pissed after Dallas lost AND they had to crawl to the highway and beyond.

Yes, it's a pain in the arse, but what's a person to do except avoid going anywhere near an event if they can.

All I know about Arlington Texas is that a blogging cab dispatcher in Arlington Virgina gets calls from there requesting a cab from time to time!

"good rivets" - like that, will start using it myself.

Girl myou should be in the middle of that mess and try to get out and on the road to home. It takes FOR EVER! Tedious as hell, particularly when the Cowpatties play as BAD as they did when I went up to see them play Philly. Shameful! Yep, let the folks in Arlington deal with the snarl. Hell,, they've already got Six Flags and the Rangers to deal with.

Wouldn't be allowed over here.

I dislike parking-lots such that I can't imagine grilling a steak in one, anyhow I also sufficiently hate crowds of people so I'm not even there - I don't do big group events.

You're preaching to the choir here, sista.

I think tailgating is cool. It was forbidden by the Oilers owner (who wanted to sell those $7 beers), but the Texans' owner encourages it. I never see any outrageous or violent behavior, and I think the tailgaters take pride in the appearance of their spreads. They actually pay for multiple parking spaces in order to set up their gear. It's just a big picnic.

And I've been to a number of full-house Houston Texans games which took maybe 20 minutes to and from. Once you hit the feeder you were basically home-free. So maybe it's the Irving freeway layout. ("Expressway", indeed. Where'd you learn those fancy Yankee words?)

I think it's so sad that they soon won't be the Irving Cowboys with the stupid stadium roof. (Remember Dr. Demento's "The Ballad of Irving"?) Then I'll have to make fun of America's team for their field performance. I come by it honest. I pretty much gave up on the Cowboys on 31 December 1967. Then after Don left and they became God's team, it went from disappointment to antagonism.